A 1962 interview with the revolutionary poet Siddhicharan Shrestha 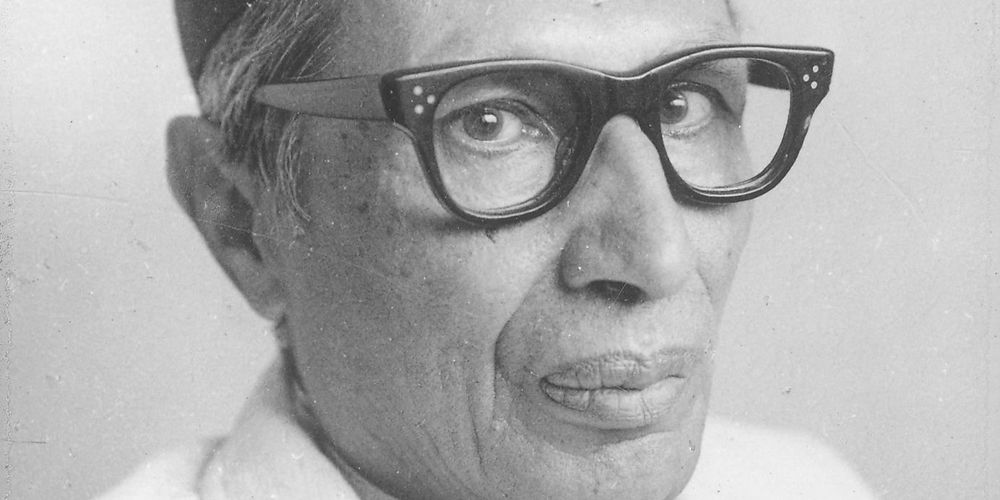 He came to the city and found friends. He was young and carefree. But he could not forget his place of birth. No matter how much he integrated into city life and tried to run far away from his roots, he could not stop thinking about where he was from. A fierce conflict raged inside the young man’s heart. The conflict eventually tore him up and paved way for creativity, in the form of gratitude towards his hometown. An internal barrier burst open with these verses:

How did I reach this dry state

But I do not regret -

Your form is mapped

“Our literature needs to be inclusive and expansive, in this day and age. It is important to spread our original creations to other countries and develop literature simultaneously with the nation. That’s why writers like us have more responsibility than ever before. Literature can be a way for others to learn about us. They can get a sense of what being a Nepali means. That’s why one ought to continue writing and creating literary work. The international community has already acknowledged the supremacy of our cultural heritage; writers will be considered successful only if our literature also gets acknowledged in the same way. Not only that, classics from other countries should also get translated into Nepali. This principle--literature should serve the entire world, not just one’s country -- should be manifested into action.”

This was a viewpoint expressed by the revolutionary poet Shree Siddhicharan Shrestha who had freed himself from Okhaldhunga’s limitations.

It was only a few days ago -- I got an opportunity to sit with the poet on an old balcony attached to an old house in Old Bhansar. I had gone there to talk to him and get to know him. While chatting, I asked him, “What are you writing these days, Kaji dai?”

“I am thinking of writing a national epic based on Nepal’s history.”

“Well, Kaji dai, after Urvashi and the Newari Siswan and Fuswan, we haven’t seen any other books. I don’t get it -- how did this happen?”

“No no, my novel Balibadh and other completed works -- from earlier days as well as more recent ones -- have reached the press for publication. The non-fiction works Junkiri and Kantimati and the essay collection Aansu are ready for publication. But I haven’t been able to publish them due to various reasons.”

Boom! The noon firing startled me. Here was another writer, an academic, compelled to stuff his work inside a dark closet. After learning this fact, a white building behind Dharahara began to shimmer in front of my eyes.

There was something incredible about the poet Siddhicharan. His eyes emanated a surreal sentiment, as if they had already left this world in search of something elusive.

The cheeks were hollow and the face as well as the nose were long. The eyeglasses were supported by big ears. He was thin and tall; his hair was uncombed -- he did not care about imitating popular culture. Highly tolerant to a fault, a straightforward speaker.

In 1940, he was convicted for writing revolutionary poems and jailed for twelve years.

He was also a chief editor of Nepal’s first daily newsletter and a founder-president of several novel initiatives in Nepal such as the All Nepali Peace Organization, Nepal Writers’ Association, Veterans’ Organization and People’s Art Center. All these facts -- including his successful leadership of a group sent abroad to represent Nepal -- is quite incredible, especially when I look at him, at poet Siddhhicharan Shrestha’s face, and listen to his odd way of speaking which is peppered with an irregular mixture of pronouns. These details provide a true essence of Siddhicharan-ji’s personality, as if these qualities -- the ability to organize people guided by a poetic sensibility, combined with an inherent desire to always serve society -- are present in every aspect of this ordinary face, hidden in this soft voice. The fact that he continues to struggle every day yet move ahead, are testament to these qualities, these qualities that radiate from his facial features and his voice.

“Kaji dai, how did you get into literature?” I asked.

“I used to listen to mother and other family members reading Bhanubhakta Ramayan and Subba Homnath’s poems.  After spending time with literary guru Hriddhi Bahadur Malla, my interest in literature gradually increased. I became a poet after witnessing the destruction caused by the 1934 earthquake. I wrote a poem titled Bhuinchalo (earthquake); the poem got published in Gorkhapatra that same year. My literary life began in this way. Eventually, some poems got published in Sharada, Udhyog, and Nebula.”

“It seems that you mostly write poems about nature.”

“No, I wrote poems about nature during the initial stages of my writing, but later started writing revolutionary poems that dealt with socio-politically relevant subject matters. Since I believe in making connections, I write poems about every topic.

My curiosity had not died yet. So I asked, “What about your writing mood and style…?”

“That’s probably why you have a habit of sleeping until late morning.” I also interrupted him.

“Ha. Ha.” The reappearance of that same old smile and then an answer, “Yes. The mood appears by itself once I hold a pen with determination and commit to write.”

“And how much encouragement have you received in this field?”

“The culture itself has encouraged my literary life. After a few of my poems came out, Shree Surya Bikram Gyawali gave favourable reviews to Devkota and me in the literary collection Sahityako Dui Tara; I will never forget that. There was encouragement from Professor Rudraraj Pandey and Basudev Bhattarai as well. Along with that, the kind of encouragement and respect I have received from the Nepali people is unforgettable.”

I glanced towards his room from the balcony -- a bed in one corner, and next to it, a mattress on the floor with a few books scattered on top. A table in another corner on top of which lay a notebook, a few books and newspapers, as if they were tired after wrestling with one another and taking a rest wherever they found a spot. Some books, unable to capture a spot on the table, had fallen on the floor. In this manner, books and newspapers were scattered all over the room -- each relaxed in its own spot, uncontrolled by anyone. In response to the state of these materials, I promptly asked a question, “It seems that you study a lot...Which writers do  you like, Kaji dai?”

“Lekhnath -- my initial work was an attempt to imitate him. When it comes to international writers - Wordsworth, Shelley, Keats, Byron, Robert Frost, Sumitranandan Pant and Mahadevi Verma.”

Out of courtesy, I requested the poet, “Kaji dai, if you don’t mind, I will ask a few more questions. Is literature for the sake of art or society? Which principle do you follow?”

“This question is getting obsolete these days.

"Since humans are social animals, any creative work should serve society. Another thing -- if the work doesn’t have artistic merit, then it will not be literary.”

“Oh by the way, what do you think about the state of Nepali literature these days?”

“The present is always ahead of the past and after browsing through creations by today’s youth, I even get a bit jealous. Considering the works of Mohan Koirala, Mohan Himanshu Thapa, Bhairav Aryal, Birendra and Bhupi Sherchan, I feel that the future of our literature is very bright.”

“What do you consider to be your best work, Kaji dai?”

“It is quite difficult to examine one’s own work; even then, I feel that I have been especially successful with only a few projects, which I was able to develop well.”

When he alluded to ‘well-developed work’, I suddenly remembered, people say that Siddhicharan’s artistry peaked with ‘Mero Pyaro Okhaldhunga’. I was concerned that the poet was getting irritated by my questions, but he responded enthusiastically, “I maintain that I have always tried to deliver something new. It’s true that Nepalis have especially liked my earlier work. And I am aware that I don’t get the same kind of response these days. But I don’t agree with the idea that this fact reflects my development as a writer.”

“Well, Kaji dai, I still feel that we haven’t received a literary work of that calibre.” I was provoking him.

“I consider literature to be a necessary factor for progress in life and for me, success is the moment I am able to create a literary work. From this perspective, my life has gone to waste. But then I devote every moment to the effort required to produce work that has literary merit. I haven’t been able to produce the kind of work that I have wanted to write or offer to society. I will offer; I am determined to offer, but I am afraid that time will sweep me away, along with my wishes and desires, just like it swept away Devkota-ji and other friends. In short, I have made up my mind to completely devote my life to literature.” I received a long answer from him, as if he was addressing everyone’s discontent.

My eyes landed on an oil painting hanging on a wall inside the room. That painting was by Bishnucharan, the author of Nepal’s first novel, Sumati. I turned my eyes toward this literary son who had followed his literary father. His face might have dissolved in the present moment, but his vigorous, meaningful answer was ringing in my ears. His response had irrepressible zeal and mixed with it was a kind of resignation but also wisdom -- byproducts of brittle, bitter experiences in life. I also noted how he hadn’t forgotten late Devkota and Pradhan, even though others had tried to.

This wasn’t the end of my questioning. I still wanted to learn about his views regarding the Nepal Academy. But I felt that this was pointless. Because this academic’s life and character had already pointed out that he didn’t have the courage to openly lie and say that the Academy is doing good work. Besides, I didn’t want to put this academic in an awkward position, compelling his co-workers to stare at him with disapproval. That’s why, keeping my curiosity inside me, I asked the poet’s permission to leave, this poet who had become a victim of circumstance. With a heavy heart, I crossed Old Bhansar’s potholed street and headed towards New Road which started from Siddhicharan-ji’s house.

Through his writings in Nepal Bhasa and Nepali, Siddhicharan Shrestha contributed to the struggle against the autocratic Rana regime. He passed away in 1992 at the age of 80. This is a translation by Niranjan Kunwar of an article from Uttam Kunwar’s anthology of interviews, Srasta ra Sahitya (Authors and Literature), published by the Uttam Kunwar Memorial Award Fund.

Uttam Kunwar  Uttam Kunwar was the publisher and editor of Ruprekha. He won the Madan Puraskar in 1966 for Srasta ra Sahitya, an anthology of literary interviews.

“Siddhicharan encouraged me to write, Rimal to become modern and Devkota to become disciplined…”

America and Nepal seen through each others’ eyes

A 1962 interview with the revolutionary poet Siddhicharan Shrestha

"Reason, incident and consequence; these are the primary bases of history" - Baburam Acharya

'I don’t have faith in this thing called God,' Conversation with Parijat from 1963

Parijat on literature, marriage and faith