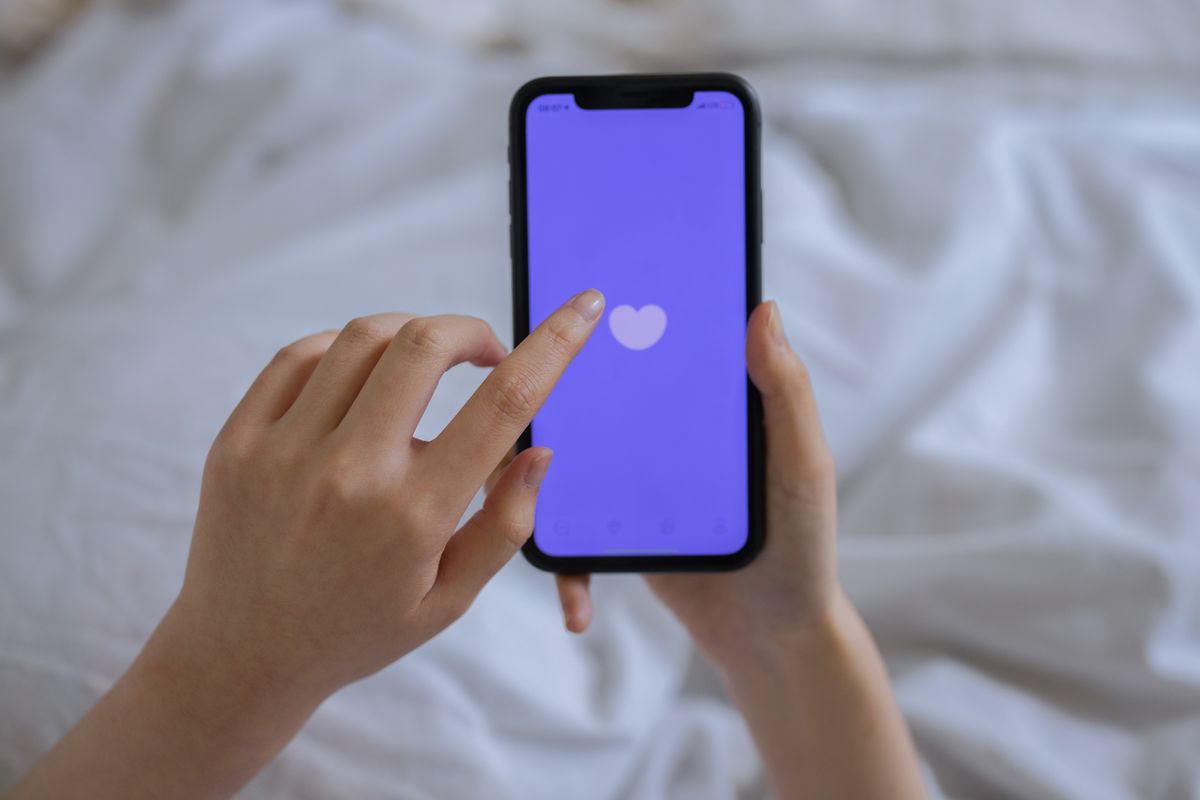 Avant Shrestha and Richa Rajbhandari met when they were just teenagers. Introduced by mutual acquaintances, the two started off as friends and then began dating after a few months. Twelve years later, the two are now happily married and also run a business together. The two have fond memories of what it was like to “date” in 2008 when social media had yet to fully take off.

“Friends would act as messengers, delivering letters back and forth between lovers,” recalled Rajbhandari, 28. She adds, “In the past, people would even exchange pictures with notes written on them. Sending things like love letters, greeting cards and roses were a big part of dating then. I don’t think people do that as much anymore.”

Shrestha and Rajbhandari were perhaps part of the last generation of young Nepalis who did not make use of social media in their courtship. The forbidden thrill of late-night phone calls over the landline while hiding from family members has been replaced by private cell phones and disappearing texts. Today, much young love takes place online, via social media networks such as Facebook, Instagram, and Twitter or via dedicated dating apps like Tinder, Grindr, and Bumble.

Often nowadays, the digital sphere seems to dictate the social partnerships one forms. Today, social partnerships, in general, are formed across much broader circles. Rather than meeting someone solely because of proximity, people tend to form acquaintances through the interests they present online. Here, Instagram selfies, LinkedIn profiles, mutual connections, are all information that people can use to link up with one another, and dating has been no exception to this new way of digital connection. And just like the rest of the world, it seems that the metropolitan hubs of Nepal have also seen their fair share of changes to their standards of courtship.

In all of this, the emergence of dating apps has been a key medium for bringing about the changes in question. Slowly but steadily, more and more Nepalis seem to be finding themselves on platforms like Tinder, Bumble, and Grindr. Unlike what was the case for Shrestha and Rajbhandari, potential partners are no longer limited to friends-of-friends or peer groups. “Back then, the only situation where I could imagine meeting someone entirely new was when you were shifting schools or jobs,” said Shrestha, 30.

Suvani Khanal, a 21-year old student, is part of the younger, DM-sliding generation. Meeting new people online comes naturally to her. In fact, Khanal believes that dating apps simplify the whole dating process, and helps one figure out what a person wants from a relationship, and filters out people that don’t match with your ideals. “You can simply put up what you are looking for on your Tinder bio, and usually only people who want similar things connect,” she said, adding, “It’s not that you’ll date everyone you come across on Tinder. But unlike in the real world where you start from zero with a person, when online you already have a certain connection that makes it easier to kickstart things.”

Khanal, who met her current boyfriend on Tinder, shares, “I don’t think I would have dated him if we had met in person, as he also happened to be friends with my brother.” She goes on to explain how preexisting social dynamics also influence who she chose to view as a potential partner. “As soon as I start calling someone ‘dai’ a lot of social boundaries would come into play,” shares Khanal.

However, a way to bypass societal technicalities is not the only development that has been brought about by dating apps to Nepal. More than just expanding the reaches of your social network, it looks like dating apps also promote a sense of self-commodification amongst their users. As a matter of fact, a 2017 research article published in the Journal of Sociology explores the subject of self-commodification and self-branding while pursuing relationships online. The findings of the paper highlight multiple accounts of users trying to create an ideal Tinder profile that is able to better market them to “buyers”. The article specifically reads, “… participants in this study had a commodified understanding of the self. They acknowledged the need to engage in self-branding activities to market themselves as desirable commodities in a crowded relationship marketplace.”

While this was an Australian study, users in Nepal share similar experiences. Khanal, who started using Tinder following the end of a long-term relationship, shares, “I felt that when online, it was quite easy to impress a person.” She further elaborates, “When I’m meeting someone physically through friends, I’m not always up to the mark. But I’m 100 percent ready on social media, and when I’m talking to someone online half of the impression is made by my profile. The rest is done by a little talking.” Khanal even admits that there were times when she had copy-pasted the same text message when talking to multiple people at the same time.

Khanal is not alone in complying with this seemingly superficial nature of online dating. Safal Lama, a 22-year old non-binary individual, believes that people do tend to fixate on physical features when they are online. Lama, who also happens to have a physical disability, recounts a Grindr date that went rather poorly. “I went out on a date with a person that I’d been talking to on a dating app for around three months. While on the app I had only used pictures from my waist up, I did tell the person I had a physical disability on numerous occasions. When we met physically for a date, they sort of blatantly questioned my appearance,” said Lama.

This vanity that circles the world of online dating might also stem from the hookup culture the dating apps seemingly propagate. In fact, even in Nepal, dating apps seem to have garnered quite a significant user base that seeks out casual hookups over serious relationships. With younger generations in urban hubs of Nepal developing a much more relaxed attitude towards relationships and sexuality, people have made use of online dating apps as a medium to explore themselves and to connect with others willing to explore. Suvam Chaudhary, a 23-year old fashion designer based in Kathmandu, who identifies as gay, shares that within the queer community more often than not, the word ‘dating’ is misused to imply ‘hooking up.’

When asked about how people could distinguish between those who wanted a fling and those who actually sought a relationship, Khanal revisits her previous claim about “finding what you are looking for” and adds, “You just know with barely half-an-hour worth of chatting, whether or not the person is worth your time. Small talk like ‘have you had dinner?’ or ‘what’s up?’ aren’t really very pervasive in these apps, and people are usually pretty upfront about what they’re expecting.”

But while Khanal’s statement might seem reassuring for those looking for something other than a one-night-stand, it also paints a stark difference between the heterosexual and queer realities of using online dating apps in Nepal. “Our community is one that is starved of love and affection,” believes Chaudhary. He goes on to add, “Perhaps it is because of this that most of us are easily swayed by kind words and grow dependent on others for affection.”

Besides standard apps like Tinder and Bumble that have become household names, the queer community too has platforms when it comes to the matter of online dating. According to both Chaudhary and Lama, apps and websites such as Grindr, Blued, Romeo, Daddyhunt, and Hornet are some of the many queer dating apps that are actively used in Nepal.

Yet, despite the abundance of dating apps catering to the queer community, Lama shares that it is still rather difficult to find people who are looking for a serious relationship. “People just tend to look at my pictures without bothering to read my captions or status for what I am looking for and directly message me asking questions like age, role, from, and fantasy,” they said.

This checks out with Chaudhary’s perception of the general online dating scene in Nepal. He shares, “A lot of the people are online just to hook up. They meet, set up a place, and consensually choose to do as they please.” However, he also adds that there are instances when this sort of relationship can enter dangerous waters too.

“Generally, in South Asian nations, the trend is that whenever you match and hook up with an older traveler, you ask for money. This is where things go to a whole new level. Things are now no longer limited to just dating and involve a form of barter. Kind of like an indirect approach to sex work,” he said.

Chaudhary too shares second-hand stories of young queer teens being exploited by older individuals and foreign travelers on these dating apps. “There are some cases where travelers that people have hooked up with have taken unconsented nude photographs and videos that have been passed around.”

The internet has certainly given the Nepali approach to romance a new look. Young love these days appears to be becoming more reliant on these apps and digital networks to function as a medium, just as how phone calls and letters dictated romance in the days before. Shrestha for one believes that these apps are just an evolution of what existed earlier. He shares, “When we were in the 9th and 10th grade, websites like Hi5 and Facebook were just starting to catch on, and even then, the need for finding new connections was always there.”

Rajbhandari adds on to this saying, “In the past, even in arranged marriages, families would ask around and try to find out details about a potential bride or groom. Now, these habits seem to have evolved to make use of spaces like Facebook and Instagram to find out more about a person.”

But despite all of the headway that has come by, many still seem to hold reservations towards the plausibility of these platforms. Shrestha even questions the ability of these apps to help users find long-term partnerships. “If it helps people, then good for them, but there are horror stories and people should be aware of them as well,” he said.

From programming the first computer able to read Devanagari to developing low-energy desktops that are used in telemedicine, Shakya’s contributions are manifold.

Shallow fakes, where videos are edited to remove context andpresent statements in a different light, are just as dangerous as deep fakes.