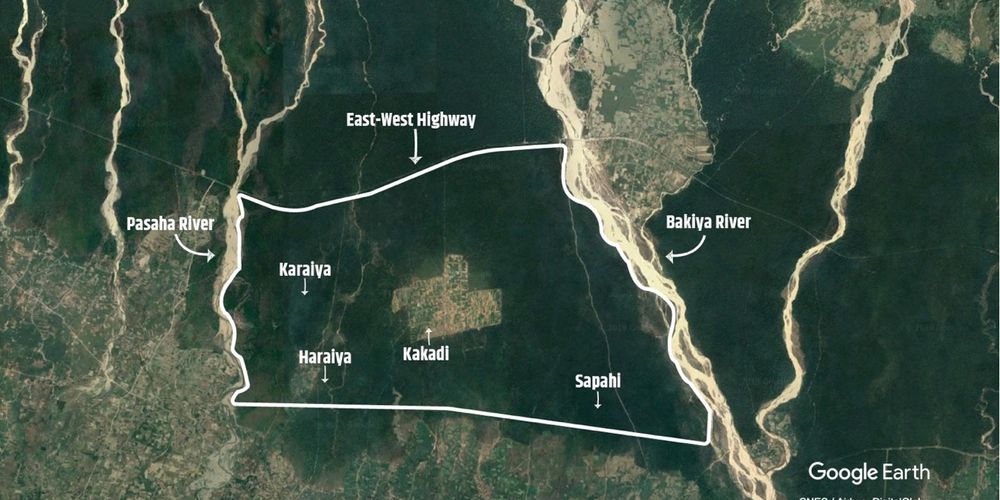 Area that the proposed airport is going to cover. Photo: Google Earth (The Record)

With an area comparable to London’s Heathrow, Nijgadh International Airport has been planned as a colossal project that would make it the fourth largest airport in the world if completed. The proposed location for the airport, however, requires massive deforestation in the eastern Tarai which would cause large-scale displacement of wildlife native to the area. A virgin forest sprawling over 8045.79 hectares in Province 2, Nijgadh is covered in Shorea Robusta (Sal) trees that are home to countless species including 33 different types of mammals, and over 300 plus different kinds of birds, all of which will be adversely impacted by the cutting of well around 2.4 million trees.

Baburam Lamichhane, an officer at National Trust for Nature Conservation said that although Nijgadh is not a reservation area for wildlife, it is a crucial corridor for migratory species. Animals including elephants,  deer, fishing cat, wild cats and tigers roam around the corridor because of the availability of water streams like Lal Bakiya. According to Lamichhane, “The East-West highway is situated near Parsa National Park, which has caused more animals to migrate through the forests in Nijgadh. If the airport construction takes place as planned, a major migratory corridor for the animals will be affected. Establishment of the airport will automatically have an adverse effect on the migratory species of the area.”

According to WWF Nepal, the ecology of Parsa National Park makes it particularly important for tigers and elephants. Dr. Prabhu Budhathoki, a former member of Nepal Planning Commission said, “Because of the water streams like Lal Bakiya that flow through Parsa National Park and Nijgadh, there is a significant population of tigers and elephants in the area. If we destroy their territory, they will not have a secure place to live. This will automatically threaten the lives of humans that live close to the area. Planning an airport in Nijgadh is not wise at all.”

Nepal has garnered praise for successfully increasing its tiger population by 100% in the last decade (from 121 in 2009 to 253 in 2018). 18 of Nepal’s 235 tigers live in Parsa, and if Nijgadh airport is built, they may not have a home for much longer. Sabita Malla, a wildlife biologist at World Wildlife Fund Nepal said, “Large species such as elephants and tigers require large amounts of space for movement. They migrate according to the availability of food. Parsa National Park has limited water resources, which means that the extension corridor-- Nijgadh forest, plays a crucial role in the survival of the animals. Especially during dry spells, species migrate to Nijgadh forest for food and water.” With the deforestation of Nijgadh, these animals will have nowhere to go.

According to a study conducted by Small Mammal Conservation and Research Foundation (SMRF), animals like jungle cats, porcupines and mongoose are widely distributed in the forests of Tarai region including Nijgadh. Other rare mammalian species such as honey badger and striped hyena have also been found in the area. Sagar Dahal, President at SMRF said, “The degradation of forests automatically changes the habitat. Small mammals can easily move to suitable habitat nearby but not the large ones.” Dahal added, “Once the primary forests/wild areas are wiped out, it will change the site forever. And the damage is irreparable. Large bird species like Giant Hornbill will eventually die due to lack of roosting trees. In the case of Nijgadh, I am specifically worried about the elephants, as they migrate through same route. The plan will first and foremost affect their movement.”

In response to criticisms about ecological damage, the Environment Management Planning (EMP) has proposed a plan to plant twenty five trees in compensation for each tree that is cut. However, it has not been specific about the technicalities of this afforestation programme. What kinds of trees will be planted and where they will be planted remain unclear.

“As a wildlife conservationist, I believe that the Nijgadh project is an absolute ecological crime. It will increase the risk of natural disasters such as floods, endanger important heritage sites, the list goes on. The government's silence on these matters makes me very suspicious.”

On the afforestation proposal, wildlife conservationist Manoj Gautam said, “Let’s suppose, even if the government is successful in planting trees at the ratio of 25:1, these trees will not be as valuable as the forest is now. Once the animals, birds and resources are gone, they are gone forever.” Gautam added “As a wildlife conservationist, I believe that the Nijgadh project is an absolute ecological crime. It will increase the risk of natural disasters such as floods, endanger important heritage sites, the list goes on. The government's silence on these matters makes me very suspicious.”

A member of (Pro) Public Interest Litigation, Sanjay Adhikari, said “The government lacks an understanding of the difference between ‘greenery’ and ‘jungle.’ The plantation of trees might bring out greenery but not the life of the jungle. The law states that even if there is a source of gold or diamonds which affects biodiversity, the source should be protected. Nijgadh international airport will have a huge impact on Nepal’s biodiversity.”

While criticisms about the impact of Nijgadh’s deforestation on animals have been coming from various quarters, many government employees have been in staunch support of the airport construction project. Budhi Sagar Lamichhane, an officer at the Ministry of Culture and Tourism said “Nijgadh is very suitable for an airport in every aspect. It will have two parallel runways, the traffic will be manageable, and we can welcome European planes too. The airport is necessary for the future generation. Laws have been created for the development of the country, so laws that prohibit us from development should be disregarded.”

Suman Subedi, Deputy Secretary of The Ministry of Forestry Nepal, echoed this “pro-development” sentiment, claiming that while other countries “are already exceptionally developed or developing, our country is not even halfway there.” Subedi said that while “there should be a balance between the environment and development, the Ministry of forestry should not be held responsible for the development plans made by the government."

The pro- and anti- Nijgadh Airport debate has come to be constructed as a disagreement between those who are in support of Nepal’s development and those who are against it. But wildlife conservationists claim that their discontent is not with development per se, but the means that the government is willing to use to get there. Conservationist Manoj Gautam said, “Wildlife conservation is not anti-development. Rather, it is about parallel goals where there is a balance between development and protection of the environment. Development plans should be sustainable and beneficial for both humans and non-humans alike.” Environmental activist Chanda Rana expressed a similar sentiment, saying “Development is necessary. In fact, Nepal needs an International Airport as soon as possible. But not at the cost of 2.4 million trees.”

Correction: The map of the proposed airport in an earlier version of this story was incorrect. The featured imaged was replaced on March 22 to show the correct map.