The former bureaucrat and 2017 Kathmandu mayoral candidate reflects on running as an independent and what independents and smaller party candidates bring to the table. 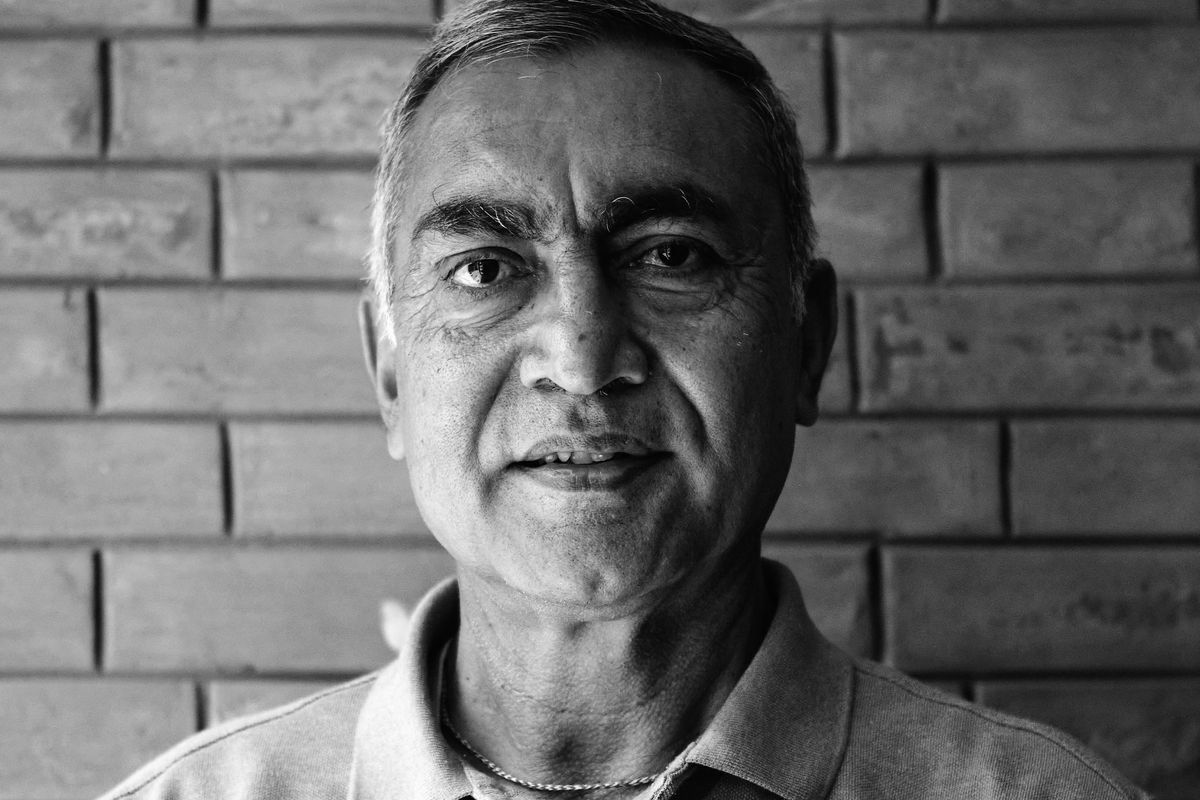 With the local election just two days away, candidates, both party faithful and independents, are out in full force, campaigning and meeting voters. In Kathmandu, rallies are being held every day in one part of the city or the other. In recent days, clear frontrunners for the Kathmandu mayoral race have emerged – the Nepali Congress’ Sirjana Singh, the CPN-UML’s Keshav Sthapit, independent Balen Shah, and Bibeksheel Sajha’s Samikshya Baskota. While the mainstream political party machines are out in full force behind their candidates, things are a little more difficult for smaller parties like Bibeksheel Sajha and independent candidates.

It is at this critical juncture that The Record decided to speak to Kishore Thapa, mayoral candidate from the Sajha party (before its merger with Bibeksheel) in 2017, to learn about his experience contesting the elections. Despite being from a small party and a relative newcomer to politics, Thapa, an urban planner and career bureaucrat, managed to garner over 18,000 votes, coming in fourth behind Ranju Darshana of the Bibeksheel Party. Thapa, who remains with the Bibeksheel Sajha party, spoke about his failed bid for mayor and his assessment of the current crop of independent candidates and those from smaller parties. Excerpts:

Let’s go back to the 2017 local elections. You ran for mayor as an independent candidate then. What prompted you to aspire for a political position?

Back when Keshav Sthapit served as a mayor, there was a project called the Kathmandu Urban Development project, which was funded by the Asian Development Bank. I was assigned as manager for the project. During my tenure, I was able to learn a lot about how Kathmandu worked as a city. I got to closely witness the bureaucracy in place, meet and work with different ward chairs, and also closely view the challenges and the responsibilities that a mayor has. I realized the potential and weaknesses that Kathmandu had as a metropolis.

Once the new constitution came to be and really empowered the capacities of local governments, I felt that there was a lot I could do to change Kathmandu. The confidence that I could drive this change was what led me to file my candidacy.

While you had worked at the municipal level, you did not really have a lot of direct political experience prior to 2017. What was the mayoral candidacy experience like for you?

There’s a general concept in society that only people who want to benefit off of fear and power get into politics. Many have accepted that politics is a dirty game. So when I announced my bid for mayorship, many people in my close circle, including my family, were very surprised. Some of my friends even asked why I would want to leave my profession as an architect and urban planner to get into politics.

I did see their point — to a degree. I was not very keen on a policy-focused role such as that of a member of parliament, but the idea of mayorship really got my attention. As a mayor I could play a development and governance-oriented role, working directly with the people at the city frontlines.

When I first announced myself as an independent candidate, I became a specimen for many people to look at and question how I might get anything done. But once I started appearing more in the media and doing more interviews, I imagine that I managed to set myself apart from other candidates. Gradually, I was better able to convince people that I was the candidate that they wanted and needed.

However, a big issue that I faced as an independent was my electoral symbol. Big parties have a fixed electoral symbol that is widely recognized by the public. On the other hand, newer parties and independent candidates can’t really benefit from such political branding. During the last election, I had to run under the 'camera' symbol, which I only received six days prior to the date of elections. People might have known me by my face and my agendas, but on the ballot paper, they had nothing to identify Kishore Thapa. Perhaps if I had additional time to campaign with my symbol, I could’ve gotten more votes.

Is there a reason you didn’t run for mayor this time around? And are you still active in politics?

Over the last four or five years, I have been quite politically active. But my actual mission in joining Sajha as a member was not to become a political figure. It was rather to work on party building. I never really had a strong passion for politics in itself; instead, I wanted to place myself more on the governance side of things. I felt that I could function more effectively as a minister, a mayor, or an organizational lead. As of now though, I do not really enjoy the political plays that we have in Nepal.

After the 2017 elections, I requested my friends at Sajha to put me to use in party-building and not just in field-level political campaigning.

As for why I did not run for mayor in the upcoming election, it is largely because of how much things have changed for Sajha as a political party. Five years back, nobody even knew what the Sajha party was. This time, while some may agree and some may not, at least people can identify Sajha and its goals. During the last local elections, there were only seven candidates from what would later on go to become Sajha. This election we have 274, spread across all seven provinces in 29 municipalities, 10 rural municipalities, and 94 candidates for ward chair.

The party-building that we’ve done over the last five years has been significant and has shifted our interest from hubs like Kathmandu to municipalities and local communities across the country.

I also believe in having younger candidates. This election for Kathmandu we have Samikshya Baskota running for mayor. And while I might not be bidding for mayorship, I am more than willing to support and offer guidance to Samikshya should she win.

Local elections mean a lot for the city and country. With so much at stake, what position do you think smaller parties and independent candidates have?

Our society still does not take the idea of an independent candidate very seriously. Society here has been so divided into parties and political factions that independent runners always have a big question mark over them.

Even during my mayoral campaign, I was constantly bombarded by questions like “What party are you from?”, “Why didn’t you run from a bigger party?” or “Wouldn’t you have a better chance of winning from an older party?” But just getting the mayor’s seat is not the end goal. The goal is to establish a new political narrative and develop a new political culture.

I still believe that if I were to run from an older party like the Nepali Congress or the CPN-UML, there’s a good chance that I could win. Some even approached me with a party ticket. Getting behind those parties would mean more individual and political success, but society and country will not see the growth that it needs.

How are independent candidates and those from smaller parties different from those legacy parties like the Nepali Congress and CPN-UML?

Old parties often have a criteria when it comes to picking candidates: family members of top politicians, big donors, and sympathetic cadres. Rarely do they choose someone because of their competency. But with an independent, at the very least, the person has the confidence and zeal that they can be a beacon of change for a city or a municipality.

Small parties and independents don’t have big campaign budgets or the muscle power that old parties have. They must rely on their work and actions to convince people that they are capable of doing good. As an independent candidate, I would not be able to make the lofty promises that big party leaders often make. As an architect, I could not in good spirit get behind promises like the monorail; instead, I could at least make small but visible changes to the day-to-day lives of people.

This time, even big parties don’t have faith in themselves. The fact that they are running political alliances is a telltale sign that even they aren’t confident of winning were they to run on their own. Leaders elected in such a way would not even be allowed to make decisions without the discretion of a larger array of political forces. Such candidates would be little more than political puppets.

Say a small party or an independent candidate were to win the mayoral election. Do you think they could work effectively?

There’s a big problem here. Old parties tend to have a strong urgency for power. If they can’t hold office then they will try to influence policy decisions in one way or the other. If an independent without party backing did actually end up in office, it’s highly likely that entire parties will work against the new face.

This does not mean that we should lose faith in small parties or independents. Rather, in such circumstances, citizens themselves must carry a certain level of awareness so that political forces cannot use fear and force as a means of control. People need to be aware of what independent mayors are trying to achieve and realize that antisocial elements that hinder development need to be communally defeated.

Aside from mayorships, what value do you put on ward elections?

Ward elections are tremendously important, perhaps more so than even the mayoral bid. These are people who directly impact and work for the community they are in. Unlike mayors and party leaders, people can actually hold ward chairs and members accountable for the work that they do.

When we are voting for ward seats, it is more important to consider the individual candidates as opposed to the actual party that they are tied with. Understanding the character, attitude, and experience of the ward candidates will tell us a lot more than what the party is.

Mayors on the other hand function on a larger scale. They are actors that need to deal with the federal and provincial governments. Ward chairs and members have a more administrative and service delivery position.

Obviously, you would want a Sajha candidate to win this election. But putting aside the notion of winners and losers, how would you want the next mayor and deputy mayor of Kathmandu to work?

Every city has its own unique issues and problems. Kathmandu’s qualms will be different from that of Birgunj. Those who get the keys to the city must take into account the problems and challenges that Kathmandu has. False notions of turning a place into Switzerland or Singapore are not the way to go. We need to find our identity and preserve it.

The many ramifications hinging on the spring elections