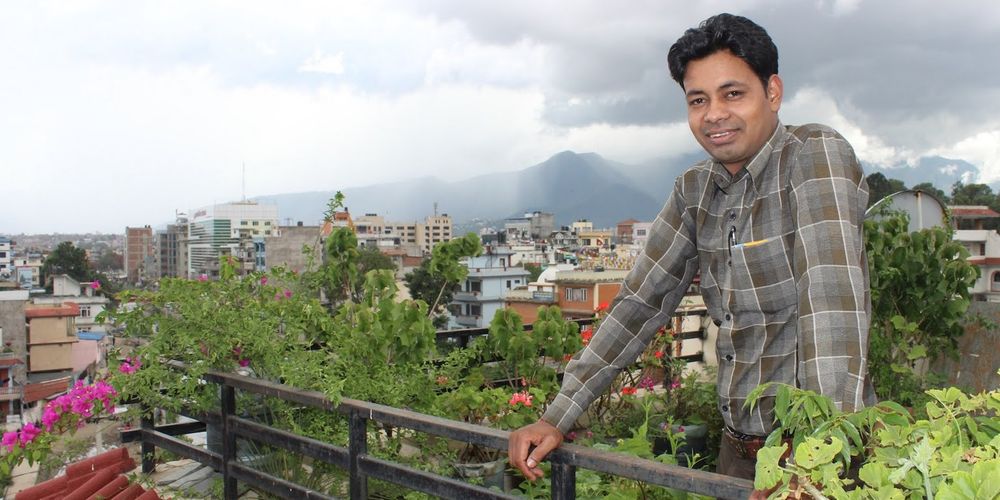 Raksha Ram Chamar, 28, is the first recipient of the International Darnal Award for Social Justice. Eldest son of Jilajit and Basmati Chamar, he overcame great obstacles to gain an education and move ahead in life. Today, the man from Sano Karma village in Kapilvastu is using his knowledge to promote justice for the downtrodden.

Chamar's grandfather used to work in a landlord’s house in exchange for rice and other things. “After he died, my father gave up his job at the brick kiln and took his place,” he said. Chamar often worked as a farm hand to pay his school fees. One day, when his father asked him to work while he was studying, he felt so helpless he burst out crying. As he grew older, his parents grew more supportive of his education.

The enormity of the caste system struck him at an early age. One day he went with his father to meet a Brahmin priest in his village. Being Dalit, his father sat on the floor. The boy, however, sat on the khat – a woven bed that is also used as a bench. His father was shocked. “How dare you sit on malik’s khat!” he told his son later. His father’s reaction angered and puzzled Chamar. He used to call the village priest bajey (grandfather) and the priest was like a friend to the family. So why couldn’t he sit on the khat like everyone else? Only after this episode did he perceive the gulf that separated him from the priest. Now he understood why he was served tea in a separate glass at Bajey’s house, why he had to wash the glass before he left.

“The priest was affectionate towards us, but he wouldn’t eat or drink what we touched,” Chamar said.

Out of the more than hundred students who took the SLC exams in his neglected public school, only two or three used to pass each year. He and a close friend of his had decided to run off to Bombay if they failed. His plans changed when he became the first Dalit in his village to finish high school. He wanted to continue his studies, but his father said he could not afford to pay his college admission fee (NPR 2,500) or his monthly fee (NPR 500). Chamar went to Uttar Pradesh in India and got admitted into Jai Kisan Inter College in Sakatpur. It was an inexpensive college; the monthly fee was NPR 60. When he completed his higher secondary education, he did not even have enough money to get the transcripts. He worked as a road construction worker in Rupandehi to earn the money.

He then enrolled in a Bachelor’s program at Birdpur College in Uttar Pradesh. For some time, he struggled to pay for his education and support his family back home. But it soon became clear he couldn’t do both. He returned to Nepal and enrolled in Kapilvastu Bahumukhi Campus in Taulihawa, and began teaching in a boarding school to pay for tuition. Around the same time, he, along with village and ward leaders, made preparations to open a community school. Once a community school was established, students like him would no longer have to leave the village in search of an affordable school. At age 19, he became the headmaster of the school.

Here, too, caste raised its ugly head. One day Chamar visited the chief of the school management board, a Tewari pundit, to resolve a matter concerning the school. He went inside the pundit’s house, sat on a khat, and they argued over the issue for an hour. Later, the pundit told another Dalit in the village, “How dare a Chamar come to my house and sit on my khat!” Their relations soured further in the following weeks. The Brahmin, who also worked as a priest, pressured the young headmaster to apologize for a concocted "misconduct". The board then removed Chamar from the headmaster’s position. Unable to endure the humiliation, he left the school. He was thus forced out of the school he had helped set up.

He continued his studies and became a facilitator for a local NGO working with village women. The NGO negotiated with brick kiln owners to raise the minimum wage from NPR 80 to 120 per day. From that point onwards, he took up a series of jobs. Working as a temporary policeman during the 2008 Constituent Assembly, he earned NPR 10,000 – enough to pay his college fee. He’d enrolled again for a Masters degree at Kapilvastu Bahumukhi Campus. He worked as a reporter for a local paper. At the time there was no newspaper with a Dalit or Madhesi editor in Kapilvastu. At that time, he also began to work as a volunteer in Mahuri Home, a human rights organization in the Madhes.

In 2012, Chamar and his friends started a weekly newspaper to establish the Dalit agenda through journalism. He edited Pradeshik Samachar. Later that year, he came to Kathmandu to work for Terai Human Rights Defenders and pursue a Bachelor’s degree in law.

For Chamar, it is very important to identify not just as a Dalit but as a Madhesi Dalit. “I’m a Madhesi Dalit,” he says. “If I call myself just a Dalit, then I’d be overlooking the fact that Madhesi Dalits are far worse off compared to hill Dalits. Take the National Dalit Commission, for example. There are 17 members, and only one is from the Madhesi community. Even the few Madhesis who have gained opportunities are Brahmins. For example, Madhesis make up 8.4 percent of the bureaucracy. Almost 5.5 percent of them are Madhesi Brahmins. You don’t even want to look into the judiciary. I don’t know a single Madhesi Dalit lawyer practising at the Supreme Court.”

Chamar has been active in the courts. In 2014 he filed a case against Public Service Commission for failing to implement provisions for reservations meant for the marginalized. The Commission was subsequently forced to change its regulations. He has sought judicial interventions against the exclusion in appointing ambassadors, judges, and commissioners for the powerful Commission for Investigation of Abuse of Authority. As a Dalit, he is viscerally alert to any form of caste-based discrimination, though he laments that most cases related to untouchability do not even reach the court.

His greatest legal victory involved the case he filed together with Rita Sah and Vijay Kant Karna in June 2015. Their complaint was against the top three parties’ agreement to bring out a constitution without drawing federal state boundaries. The Supreme Court ruled in their favor, and the parties were forced to bring out a constitution with federal boundaries, albeit one opposed by many minorities.

Chamar thinks we have gone backwards with the current constitution. The interim constitution had clear provisions for proportional inclusion and affirmative action. The first amendment did not address substantive demands of marginalized groups. The second, when it comes, might change the federal boundaries. But he doesn’t envision meaningful change in citizenship, inclusion, affirmative action, or electoral system.

But change, although slow, is visible.

“There is a long way to go, but we can’t say nothing has changed,” Chamar added. “Five years ago, the upper castes behaved like maliks, masters, while we were expected to act like their servants. They made rules and policies. They were the priests and teachers. They had wealth, brains, and education. But the dynamic has changed to some degree, at least in my village. These days, people in my community believe they are equal to so-called upper castes.”