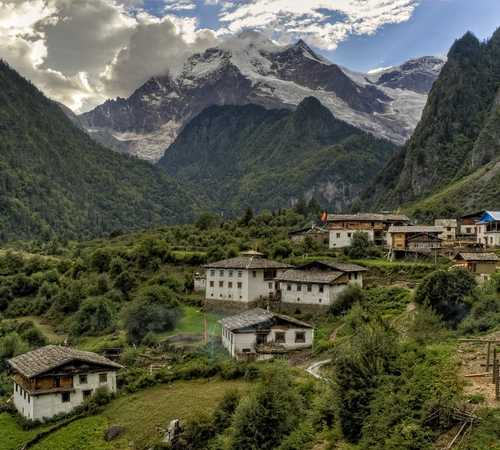 As the climate emergency unfolds all around us in the developing world, donors are increasingly sponsoring projects intended to reduce people’s suffering. In Nepal too, such projects are burgeoning. A suite of studies, however, warn that many such projects are making people's lives worse, not better.

A recent global review cautioned that climate change adaptation programs might be widening existing income disparities and pushing the marginalized further to the side lines.

The situation in Nepal is not an exception.

In Nepal, climate change is leading to a spike in disasters -- wildfires that ravage forests, monsoon floods and landslides that sweep away villages, droughts that destroy crops, springs that vanish, and glaciers that melt leaving mountains bare. The list is long but one thing is clear: people’s lives are growing harsher.

Nepal has generated international attention for foregrounding climate problems through its Local Adaptation Plan for Action, or LAPA. The government has been hailed for committing at least 80 percent of all international climate aid to the local level.

First, programs often treat climate change and its impacts as apolitical technical phenomena. They focus only on fossil fuel pollution while ignoring the economics behind it. The resultant solutions are blind to the politics that created the crisis in the first place. But top-down technocratic solutions often bring unintended consequences.

For example, solar irrigation pumps in the Tarai's water-deficient farmlands can replace pumps powered by petrol, but they are likely to over-exploit already depleted groundwater. Lowering water tables in turn limits access to irrigation for smallholder farmers who can’t afford to buy pumps.

Reliance on imported technology that disregards local realities can create additional problems. As Kristen Steele, a champion of local solutions to the climate crisis, says, “Adaptation can be radical, creative, meaningful, and place based.”

Second, adaptation programs often overlook the most important underlying vulnerabilities that expose people to climate extremes. These programs limit their analysis to vulnerabilities relating to physical and technological constraints such as hardship resulting from drought or flood, lack of irrigation, fertilizer and extension support. But they ignore the social barriers that deprive communities of access to resources and basic services -- ownership of land, representation in political networks, lack of education, and exclusion from social protection.

Flawed programs, as Sigrid Nagoda argues in her study of Humla, “run the risk of reinforcing existing vulnerability patterns and even reducing the adaptive capacity of the most vulnerable they are supposed to serve.”

We need interventions that address the conditions that create vulnerability in the first place, especially caste, gender, and class discrimination. Without addressing deep and pervasive poverty and discrimination, climate change adaptation programs will fail.

Third, in climate adaptation programs, community participation is often symbolic. Project implementers invite vulnerable people to events and conversations but don’t delegate to them actual decision-making power. Studying local perceptions of climate change and institutional responses in the Everest region in Nepal, Pasang Yangjee Sherpa found that locals actually have little say in how the programs are designed and implemented. In some cases, the participation of locals is just a natak -- it is used to show they are part of decision making whilst in reality, the institutions are still making all the real decisions.

Unless planners treat locals as equal partners with credible knowledge, Sherpa suggests, climate programs will not be effective and may even be detrimental.

Fourth, resource-poor communities are not given the financial capital required to adapt to climate impacts. The problem starts with donors.  They make attention-grabbing international pledges, but they do not actually provide sufficient funds. Instead, they cook the books to count already committed development aid as climate finance. In reality, less than 10 percent of all available funding reaches the local level.

Moreover, at the local level, funds go to a few powerful people, who spend it on activities that bring no substantial benefit to the community. We need to transform this financial architecture.

Meanwhile, with escalating climate impacts, communities face large-scale irreversible consequences. In places, flooding and landslides force people to flee their ancestral land. How do we ensure the livelihood and culture of such people? Current approaches to address climate impacts cannot deal with damages that exceed communities’ capacity to adapt.

None of these critical issues is new. Planners and policymakers know them well. They are not addressed because those in positions of power benefit from existing arrangements. Meaningful climate adaptation can’t happen without breaking existing power relations.

Climate change adaptation is not just a matter of flood-tolerant seeds and solar water pumps; it is about crushing age-old structural injustices. It is about facing history and preparing for the future.

Sunil Acharya  Sunil Acharya is an environmentalist examining the limitations of mainstream policy responses to the climate crisis.