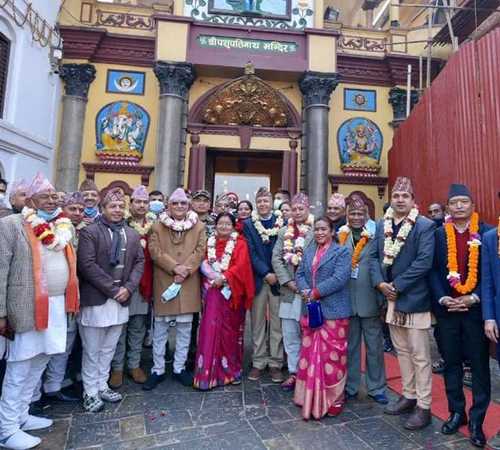 Last year, in the midst of a spat with India over border issues, Prime Minister KP Sharma Oli had fanned the flames by laying claim to what is perhaps the most sensitive of subjects for Indian Hindus -- the birthplace of Ram.

An embattled Oli -- who was then under pressure from his rivals in the party as he is now -- said that Ram had not been born in India’s Ayodhya but rather, in Thori in Nepal’s Parsa district. The reaction from the Hindu nationalist Bharatiya Janata Party was swift. A party spokesperson condemned Oli’s claims and accused him of attempting to “play with people’s faiths”.

At that time, it was widely believed that Oli’s statement was a clever ruse to divert attention away from his internal problems. But now, given his recent actions, it appears that something more sinister could be at play.

On Saturday, Oli came down hard on his party rival, Pushpa Kamal Dahal, at a political programme in Chitwan, accusing the latter of lacking the political will to pursue Nepal’s claim to Ram’s birthplace.

“Why can’t the parliamentarian who was elected from the same constituency talk about building a temple to Ram in Ayodhyapuri, the birthplace of Lord Ram. Who is he afraid of? Why can’t he utter a word, but projects himself as a true patriot?” Oli said.

Oli went on to claim that a master plan for a temple is being drawn up and that it would be installed in Ayodhyapur, a region of Chitwan that elected Dahal, on Ram Nawami next year.

Oli has stated in the past that Ram was born in the kingdom of Ayodhya that once stretched from Chitwan to Parsa, not Ayodhya in the Indian state of Uttar Pradesh.

“Sita was married to Ram of Ayodhya, not of India,” Oli had said in June, before directing the Department of Archaeology to investigate the claim and establish evidence. Nothing has emerged so far.

Days before this incendiary attack against Dahal, on January 25, Oli visited Pashupatinath Temple and offered a special worship for the “nation’s well being and global peace”, lighting 125,000 lamps. He was accompanied by Minister for Culture Bhanubhakta Dhakal, his foreign affairs adviser Rajan Bhattarai, and Chief District Officer of Kathmandu Kali Prasad Rijal.

Oli’s public visit drew widespread criticism for not just violating the secular identity of the state as a sitting head of government but also for becoming the first communist leader to offer a special puja at Pashupati Temple in the fashion of Nepal’s former kings and Indian Prime Minister Narendra Modi.

According to Shyam Shrestha, a political scholar of Nepal’s leftist movement, six communist leaders have been elected to executive head in the past 26 years but none have offered a special puja at Pashupati.

“As per my knowledge, a black he-goat was sacrificed at Baluwatar before Manmohan Adhikari moved into the prime minister’s official residence,” said Shrestha. “He was dragged into controversy after officials sacrificed a black goat without letting him know. Adhikari, on the other hand, was focused more on people-oriented policies, rather than going to Pashupatinath.”

Communist leaders elected as prime minister even take their oaths of office and secrecy “in the name of people” instead of “in the name of god”, reflecting communism’s avowed secular character. Madan Bhandari, the most celebrated leader from Oli’s former party, the CPN-UML, had long supported secularism, objecting to the 1990 constitution characterising Nepal as a “Hindu kingdom”.

None of the six communist prime ministers in recent history -- Dahal, Baburam Bhattarai, Jhalanath Khanal, Madhav Kumar Nepal, Baburam Bhattarai, and Adhikari -- visited Pashupati during their tenures. In 2010, Dahal attracted criticism for “worshipping a buffalo” in the district of Itahari for the “well-being of all humans”. He later issued an apology.

But Oli has visited Pashupati before. In 2016, during his first stint as prime minister, Oli had visited the temple on Shivaratri and “paid homage”.

Oli’s recent actions come amid a growing movement that seeks to reestablish Nepal as a Hindu state and bring back the monarchy. Many of them, including leaders of the Rastriya Prajatantra Party, a right-wing party that advocates for the revival of a constitutional monarchy and a Hindu state, are elated with Oli. There are suspicions that he could come out in favour of restoring Nepal as a Hindu state.

On Sunday, speaking at a protest movement, Surendra Pandey, a member of the Dahal-Nepal faction of the Nepal Communist Party, repeated rumours that Oli could “declare Nepal a Hindu state” on Friday during a planned show of strength. While the prime minister cannot unilaterally declare Nepal a Hindu state, Pandey’s statements echo a growing unease at Oli’s cultivation of the Hindu nationalist base.

Nepal was declared a secular country in 2007 after the king was dethroned and the monarchy was discarded. The argument then had been that the institution of the monarchy was deeply intertwined with Nepal’s official religion and hence, needed to both be excised.

But even then, Oli was against secularism. Two months ahead of constitution promulgation in 2015, Oli told the press that he opposed secularism in the constitution, and that he would instead be in favour of “religious freedom”.

“Oli was never committed to agendas like republicanism, federalism, and secularism when we as civil society members were protesting against the royal coup,” analyst Shrestha told The Record. “Now, it appears he’s following the path of Narendra Modi and establishing ties with pro-monarchists and Hindu fundamentalists in order to garner votes.”

After dissolving the House of Representatives on December 20, Oli had declared mid-term elections for April-May. His opponents in the Nepal Communist Party, the opposition Nepali Congress, and civil society have all taken to the streets in protest. While the fate of the elections still hangs in the balance at the Supreme Court, which is still deciding on whether Oli’s dissolution of parliament was constitutional, Oli is already taking to the campaign trail.

And according to political scientist Lokraj Baral, Oli’s “Hindu card” is an “opportunist political move” aimed at the elections.

“Encouraged by Indian politics, Oli is attempting to grab the sentiments of Hindu voters in Nepal,” said Baral. “But it’s not easy to reverse a constitutional provision, even though there might be blessings from India.”

There is a widespread belief that India’s Bharatiya Janata Party is in favour of reinstating Nepal as a Hindu state and has been working behind-the-scenes to cultivate Nepali politicians. There are fears of a growing “saffron wave”, especially in the Tarai, amid a new spate of pro-monarchy protests.

But Shrestha agrees with Baral, believing Oli’s recent action to be a political ploy rather than an earnest attempt to reverse the constitution.

“The prime minister didn’t work in favour of people and their well-being so he has nothing to sell,” said Shrestha. “Now he’s simply looking to use the Hindu religion card to win votes.”