A video clip with Nepali text that reads “Students in Butwal stage huge demonstration against India claiming Kalapani and Lipulekh is ours” is being widely shared on social media.

Several social media users have posted the video clip that shows a large number of students in school and college uniforms marching on the road with Nepal’s national flags and placards. In the clip, the man recording the video, describes the scene, “Students are chanting slogans Lipulekh is ours, Kalapani is ours!” The video was shot from the overhead bridge at Butwal bus park, according to him.

On May 13, many Twitter and Facebook users posted the video clip along with the aforementioned Nepali text. Bhim (Swatantra) Abis, a Twitter user, who identifies himself as a journalist, shared the text and the video clip at 12:11 pm on May 13. The tweet has been retweeted 61 times and replied to 66 times. Tweeter users have reacted to the post in several ways. Some users have reacted to it as a recent event whereas some have raised questions over the video clip’s authenticity and date. Additionally, some users have even accused him of rumor-mongering by posting an old video. The user, whose full name is Bhim Adhikari, has a bachelor’s degree in science and is a web designer, according to his website.

The tweet was also retweeted with comments by Subhash Ghimire, the editor-in-chief of Republica daily, and Kosh Raj Koirala, a journalist with the same newspaper. Ghimire and Koirala both have deleted their tweets.

According to a screenshot of Ghimire’s tweet, which was posted by Twitter user Dr Baba A’neal Che, Ghimire commented: “Huge protest in Butwal. #Kalapani and Lipulekh issue must be resolved at the earliest. Both the countries need to take steps to calm down the temp and opt for peaceful resolution.” His colleague Koirala went a step further. He retweeted the post with the following comment: “Students ignore COVID-19 & the lockdown. A large number protest against India demanding return of Kalapani & Lipulekh and withdrawal of Indian military personnel in south western town of Butwal. Despite lockdown protests continue in different parts of the country.”

Similarly, several Facebook users have also posted or shared the video clip repeating the claim (See the collage below). A Facebook page called Nepal Music Gallery has also posted the video with the same claim and has already been shared 10,000 times. Similarly, the page Umanga Bajureli’s post has generated 1,100 shares and Namaste Nepal Viral page had been shard 649 times until Friday afternoon. 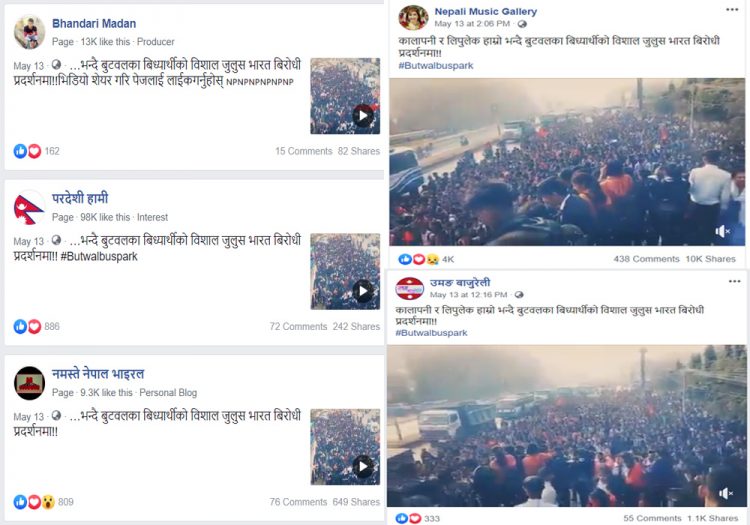 South Asia Check fact-checked the viral video. We used a web-based application called InVID. The tool turned the video clip into multiple key frames. We conducted a reverse image search of the images on Google. We found that the same video was posted on the Facebook page “Nepal E News” on November 24, 2019. This video was also shared in November last year on many Facebook pages and individual Facebook accounts.

In addition to this, we also found the same video was uploaded on YouTube on November 24, 2019, on a channel called ‘Nepali Man Dekhi’.

News website Setopati had published the news and pictures of the demonstration on November 26 under the headline “Students demonstrate in Butwal against new Indian map”.

It is true that the viral video shows a protest against India over Kalapani and Lipulekh, but it is not a recent video. We found that it is about six months old. Last November, protests erupted in Nepal after India published a new political map by including Kalapani, Lipulekh and Limpiyadhura inside Indian borders. This video was shot around that time and shows a demonstration organized in Butwal.

A few days ago, the Indian government said it inaugurated a strategic “link road” connecting India’s Dharchula with Lipulekh. This has sparked protests in Nepal. Indeed, protesters marched in a few parts of Kathmandu ignoring the ongoing COVID-19 lockdown, but the aforementioned video which is widely being circulated now is actually six months old.

Having failed at punishing rapists, the government polices sexuality

When it comes to civil liberties, KP Oli is starting to look like the tyrants he once fought

The path to war

Nepal prepares for war with the British

Classics on The Record

“I only get a fleeting sense of satisfaction from my creation.” – Ramesh Bikal

A conversation with the first recipient of the Madan Puraskar literary prize.

Chinese doctors worked urgently Monday to save critically ill Nobel Peace Prize laureate Liu Xiaobo, as the government hardened its position against growing pleas to allow China’s best-known political prisoner to leave for treatment overseas. A stark update issued by Liu’s hospital said he was suffering from poor kidney function and bleeding in the liver […]

© Copyright 2020 the Record | All Rights Reserved