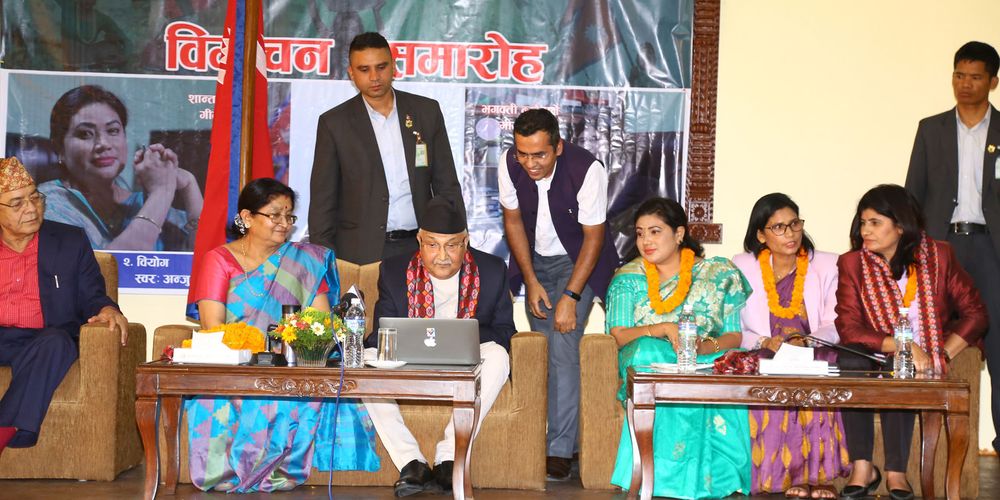 Earlier in the day, at much-hyped programs in Kathmandu, Oli had declared Nepal an open defecation free nation, the first country to attain this status in South Asia. Oli claimed that the government was steering the country towards a path of peace and prosperity, which he claimed gave detractors even more reason to dislike his government. “There won’t be any need to go to the Gulf or [elsewhere] abroad for work now,” Oli said. Last year, 400,000 Nepalis went abroad to work, and tens of thousands work seasonally or full time in India.

Gyanendra Bahadur Shahi, the anti-corruption activist who last month grabbed the spotlight for confronting Tourism Minister Yogesh Bhattarai over a flight delay, was injured after an apparently premeditated attack by cadres of the ruling Nepal Communist Party (NCP) in Chitwan on September 28, reports say.

Shahi and his friends were alighting from a van when a group of youths attacked the vehicle with bricks, stones, and rods before assaulting him outside Bharatpur’s Global Hotel. He sustained injuries to the head, legs, and torso. Shortly before the attack, Shahi had been forced to abandon a protest program against the government faced with opposition from NCP workers.

The main opposition Nepali Congress (NC) has denounced the ruling Nepal Communist Party (NCP), which it suggests was behind an assault attempt on its leader Minendra Rijal in Tanahun district on September 29. Rijal was stopped for around three hours when he was on his way to Rishing Rural Municipality. Photos and video footage show a group of people, who the NC says were NCP cadres, approaching Rijal armed with sticks and bottles. The NC has warned that it will launch a nationwide protest, if these attacks on its leaders do not stop. Earlier, NCP cadres had attacked several NC leaders in Banke district. The NC recently ended one phase of its broader anti-government protests.

The government has decided to distribute a Dasain allowance to cabinet ministers, parliamentarians of the federal parliament, and their personal assistants, reported, Lokantar, an online news portal. The website cited an , and said that Cabient had made the decisions on September 12 and September 15.

Supreme Court Chief Justice Cholendra Shumsher JBR Rana has strongly objected to what he describes as attempts being made from various quarters to [force] reviews of the court’s decisions through “unrelated individual, bodies and process”. CJ Rana said that such attempts to pressure the court were against the principle of the independent and improved judiciary that is envisioned in the constitution. Rana was speaking at a Dashain reception held in Kathmandu on September 28.

Although Rana did not refer to specific cases, his remarks were widely understood to be directed at the reported move of the Nepal Bar Council to review the Supreme Court’s certiorari order on Ncell’s tax liability.

The Supreme Court on August 27 ordered the Large Taxpayers Office to reevaluate Ncell Nepal’s tax liabilities, saying it had found discrepancies in the office’s assessment of the capital gains tax owed by the telecom service provider. The decision was criticized by many, including parliamentarians. The sale of Ncell three years ago by Norway’s TeliaSonera to the Malaysian firm Axiata has been mired in controversy over taxes and the alleged role of politicians in enabling what some describe as tax evasion.

Agitating students continued their protest against medical colleges this week, demanding the return of extra fees they had been paid over the years. Addressing a protest program in Bharatpur on September 30, students of Chitwan Medical College warned that they would  intensify their protest against the hospital administration if their demands were not met, as had been agreed by students, the medical college and the Chitwan district administration office on September 27. Medical students across the country have similar concerns and have been sporadically protesting.

The Association of Private Medical and Dental Colleges of Nepal, a coalition of private medical colleges, has refused to honor the deal and instead threatened to stall the admission process for the incoming [2076/77] batch of MBBS and MD students.

The media’s blind celebration of Gokarna Bista tells us less about him and more about our need for a success story and skewed politics.