Injured in Saudi Arabia, a worker is told: “It was your bad fate”

Injured in Saudi Arabia, a worker is told: “It was your bad fate”

Lured abroad with false promises, Mumtaz Rain returned in pain and in debt 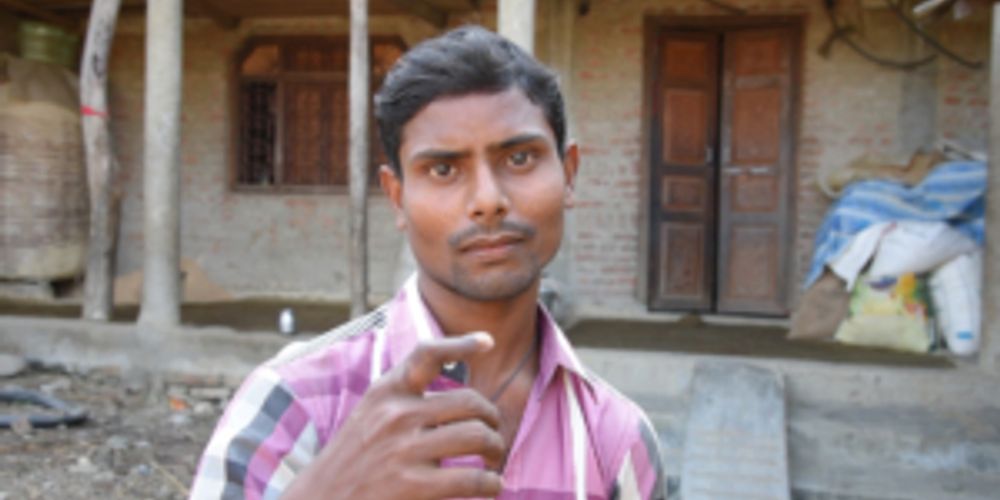 Mohammad Mumtaz Rain is a small scale farmer in Harsar village of Dhanusa district. When he had his third child, his income from farming was no longer sufficient to feed his family of five and send his two older children to school. With no employment opportunities available in his village, he decided to quit farming and seek a job abroad.

In most villages in southern Nepal, it is easy to locate a local recruiting agent who can arrange an overseas job right away.

Through a local agent, Mumtaz found a job in Saudi Arabia, the second most popular destination for Nepali migrant workers after Malaysia. Between 2008 and 2014, almost 400,000 Nepali workers migrated to Saudi Arabia, accounting for roughly 23 percent of total labor migration. To finance his trip, Mumtaz took out a loan of 90,000 rupees (900 US dollars) from a local moneylender at a yearly interest rate of more than 36 percent, the going rate in his village and elsewhere. He paid the agent a hefty fee, booked his flights, packed his bags, and left for Saudi Arabia. When he arrived, he realized his job was different than what he had been promised by the agent, a common complaint among migrant workers.

During a video interview, in his local Maithili language, Mumtaz said, “I was told that I would be working at a company, but it turned out to be a supply house. They would make us do all kinds of work. They had given me the job of making blocks, which is similar to bricks in Nepal. And one day my hand got trapped in the pressure machine used to make these blocks and my finger was severely damaged.”

This happened only three months after Mumtaz arrived in Saudi Arabia, and it was just the beginning of his problems.

“Even after my finger got severely damaged, my employer did not pay any attention to me. They did not show any sympathy and did not offer any medical support. They did not visit me even once after my injury, nor did they ask about it. They just did not care.” Mumtaz became emotional and was silent for a moment.

“I told my employer, since there is no one to take care of me, please grant me sick leave. I want to go home. But the employer refused. They demanded 6,000 riyal [1,600 dollars] as penalty for early termination of my contract. That was beyond my capacity, so I borrowed from my friends to pay them the requested sum, got my exit visa, and returned to Nepal.”

The company Mumtaz worked for, Al Jazeera Support Services Company Mehan, in the city of Dammam, did not respond to requests for comment for this article. According to its website, the company offers 15 types of service, including manufacturing (which it misspells as “manufaturing”) and proclaims: “We help businesses and individuals by providing quality, cost effective and reliable.”

Mumtaz explained, “It was a supply company and we had to do whatever type of work they asked us to do. Their policy was simple: if a worker refuses, he has to simply pay a hefty sum of 6,000 riyals and return home.”

Nepal and Saudi Arabia established diplomatic relations in 1977. A year later, Nepal opened an embassy in Riyadh. Although there are more than 500,000 Nepali migrant workers currently working in Saudi Arabia, the two countries have yet to sign a bilateral labor agreement. The lack of such agreement puts Nepali workers at risk of exploitation. In contrast, other popular destinations for Nepali workers such as Qatar, United Arab Emirates, Bahrain, South Korea, and Japan have all signed bilateral labor agreements with Nepal.

The Embassy of Nepal in Riyadh is aware of the risks involved for migrant workers and has stated on its website, “The prospect of employment in Saudi Arabia is ever growing due to ongoing development works being undertaken by the Saudi Government. However, there are also complex issues related to the proper management of the various problems faced by the Nepalese expatriates—ranging from malpractices in recruitment at home to exploitation at the destination country for lack of appropriate and swift legal protection to foreign workers.”

The Department of Foreign Employment in Nepal established a “Saudi section” in 2013 to manage an influx of workers migrating to Saudi Arabia. Despite efforts to make labor migration safer, between 2008 and 2014, 880 Nepali workers died there, and the number continued to increase each year from 27 in 2008/09 to 211 in 2013/14. Among the 880 deaths, 60 were the result of suicide. The fact that Saudi Arabia is such a popular destination despite such a high mortality rate suggests that Nepali workers do not have many other alternatives.

In addition to working in a high risk environment, Nepali migrant workers get paid very little. In an interview, Dr. Surya Nath Mishra, the former ambassador of Nepal to Qatar said, “The government of Nepal fixed the minimum salary of Nepali workers migrating for foreign employment in 2000, and did not revise it until 2008.”

For eight years the lack of wage adjustment by the Ministry of Labor and Employment and the Department of Foreign Employment affected millions of Nepalis working abroad, until Dr. Mishra raised the issue. The minimum wage has since increased slightly for workers in many countries including Qatar and Saudi Arabia—in Saudi Arabia it is currently 800 riyal (213 dollars) per month—but it is still lower for Nepalis than for workers from other South Asian countries.

Mumtaz returned to Nepal on December 25, 2015 with a damaged finger, more debt, and a heavy heart as much of the world celebrated Christmas.

When he sought help from the manpower agency that sent him to Saudi Arabia, they told him, “It was your bad fate.” They said that because he had stayed in Saudi Arabia for more than three months they were not responsible for providing him a refund or any help. Mumtaz does not remember the name of the manpower agency since he went through a local agent from his village. He says he has not received any help from the Government of Nepal.

“I am unemployed since my return. I cannot do any work. Any time I try to do something, my finger starts hurting, I can’t bear the pain,” said Mumtaz when asked about his source of income. He added, “I have not paid my friends yet. I am still in debt. If I had money, I would have but I don’t.”

In addition to his initial loan of 90,000 rupees to get to Saudi Arabia, Mumtaz borrowed 175,000 rupees (1,750 US dollars) to pay his employer so that he could return to Nepal. He continues to pay interest on both of these loans. Given that he is unable to work and that his wife is a homemaker, it is unlikely Mumtaz’s family will be able to free themselves from debt anytime soon. Mumtaz’s dream to earn a little more and send his children to school seems to have turned into a nightmare. He now lives with heavy debt and stress.

As Mumtaz was interviewed on camera outside his home, his young son looked on attentively. Perhaps the boy knew how his father’s “bad fate” would shape his future.

Puru Shah  Puru Shah writes on issues related to human rights and social justice. He has a Bachelor of Arts in International Studies. He tweets as @digitalsubway