(All photos by Deewash Shrestha)

When Laxmi Tamang was asked to travel from Kathmandu to New Delhi via bus and only then board her flight to Kuwait, she thought little of it. It was 2018 and 27-year-old Tamang believed that the route was necessary because Nepal did not have direct flights to Kuwait. She was going to Mangaf, a city on the eastern shore of Kuwait, to work as domestic help.

Tamang had two motives for wanting to leave the country for foreign employment -- to escape her abusive marriage and provide a better education for her four-year-old son, she told the Record.

“They [agents] arranged all the necessary documents for travel and recruitment,” Tamang recalled. “It felt like a lifetime opportunity to get my son out of misery so I did not give it a second thought.”

It was only after spending four months in New Delhi that she learned the reason behind her travel route. Her agent explained to her that going to Kuwait via India was the only pathway as the Nepal government had banned women from migrating to the Middle East for domestic work.

“But I was desperate and I had no choice,” she said.

She entered Kuwait on forged documents and was employed by a Kuwaiti family that knew how desperate her situation was. She was forced to work day and night and was not allowed to make any phone calls home. She was paid 70 Kuwaiti dinars a month, roughly Rs 27,000.

But things only got worse for Tamang. When the Covid-19 pandemic struck in 2020, she stopped getting paid. Whenever she complained to her employers, they threatened to send her to the police, she said. It was a fate common to many migrant workers in the Middle East, perhaps more so for domestic workers like Tamang.

One night, when her employers were asleep, Tamang escaped. Out on the roads, she got on a taxi and asked to be driven to the Nepali embassy in Kuwait City, about a half-hour drive away. As she had no money, she was afraid that she would get into trouble for being unable to pay the taxi fare, but fortunately for her, the Nepali embassy paid the fare. After almost three years in Kuwait, Tamang was finally able to return to Kathmandu. 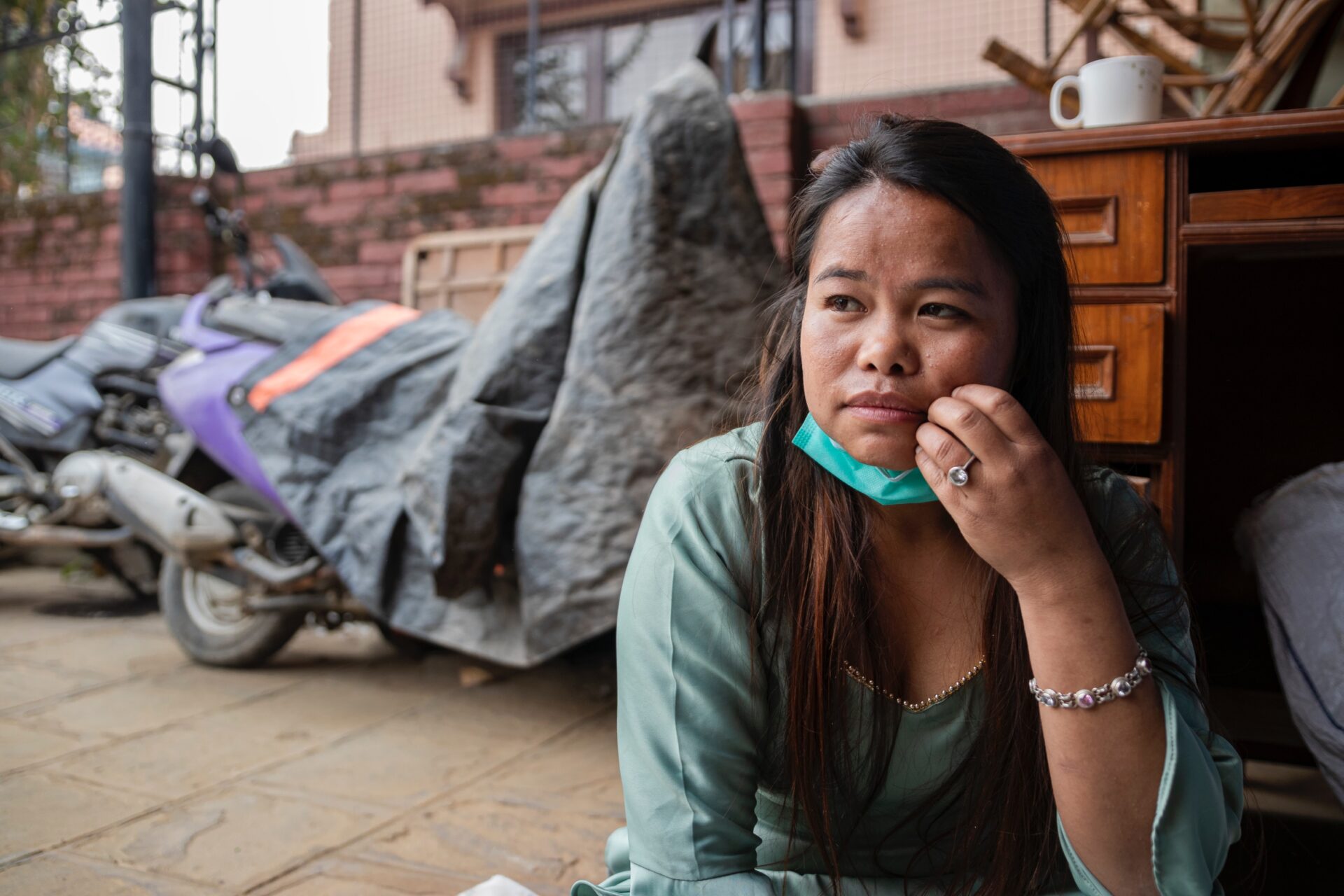 “Even though I am happy to be back, I am a little disappointed in myself for not being strong enough,” she said. “I have been unemployed for almost a year now. I have taken loans to sustain the family but I don't have any way to pay them back.”

Migrant workers suffered disproportionately during the early days of the Covid-19 pandemic. As countries across the world closed down their borders and went into lockdown, many migrant workers lost their jobs or were placed on unpaid leave. Others had their salaries slashed and even went unpaid. Thousands sought to return home and Nepali media was replete with stories of the suffering they endured on their way home and at the border.

But for one group of migrants -- domestic workers -- who were already heavily exploited and living precariously, their plights only got worse.

“A major group affected by the pandemic are women migrant workers, who are involved in domestic work, who do not have access to information or health services and have limited human interactions due to the nature of their job,” said Jeevan Baniya, assistant director of the Centre for the Study of Labour and Mobility at Social Science Baha, a think tank.

According to data from the Covid-19 Crisis Management Center (CCMC), about three million Nepali migrant workers sought repatriation from the Gulf countries; about 10,000 were women. According to the World Bank, most Nepali women migrants in the Gulf work as domestic help, even though the government has placed numerous restrictions on women migrating to the Gulf for work.

“Nepal’s restrictions on women migrants lead their employers to take advantage of their vulnerabilities. This exploitation has been on a steep rise during the pandemic,” said Manju Gurung, co-founder of Pourakhi, a migrant rights’ organization. “As a result, they are left with no choice but to return to their homeland. And even here, their struggles remain.”

Numerous studies and media reports on the Nepal government’s parochial approach to women’s safety in the Gulf have pointed out how bans are counter-productive and only push women to take up more dangerous illegal routes. Once in their destination countries, they run the risk of being exploited by employers who know that they are there illegally, as happened in Tamang’s case.

One 32-year-old migrant worker who did not wish to be identified said that she had switched jobs from domestic work to a department store in hopes of being treated better.

“They used to tell me ‘you have traveled here because you are beggars in your country’,” she said in tears. “It is still hard for me to talk about it. Even though years have passed, the pain and trauma do not go away.”

Stories like hers are disturbingly common and the Nepal government’s restrictions have not helped; in fact, they’ve made things worse.

“The law that bans domestic workers from working abroad is undoubtedly unconstitutional, as it violates the fundamental right of free movement,” said Baniya.

One 2018 study states that “Nepal still follows a restrictive migration policy for women even if it is facilitating male out-migration in the job market abroad by introducing various schemes, rules/regulations and institutions.”

The pandemic might have slashed incomes and introduced more hardship but it also provided an opportunity for migrant women like Tamang to seek legal pathways to come back home. Only, most women returned with little-to-no savings and as they’d only worked as domestic help, they had few skills that could parlay into job opportunities back home in Nepal.

All of the five women migrant workers -- who had returned to Nepal during the pandemic -- the Record spoke to said that they had no savings when they came back.

Seema Rai came home in June 2020 after working as domestic help in Kuwait for almost three years. She arrived with no money at all.

Seema“I think my children were disappointed in me,” said the 33-year-old single mother of two. “As I have been out for years, they might have thought that I would have money and gifts for them. Unfortunately, I didn't even have money to buy a sim card at the airport.”

Neither Rai nor any of the other four women have found a job yet.

With thousands of migrants returning home, the government, in April last year, had introduced a loan scheme for those who wanted to use the skills obtained to remain in the country and start a business.

“But many are unaware about this scheme and even if they are aware, they tend to get overwhelmed by the bureaucratic process,” said Baniya.

According to Pourakhi, the government’s loan scheme has largely been a failure as more than half of those who returned during the pandemic remain unemployed. Without the availability of gainful employment, many will likely choose to migrate again. But for women migrants, migrating remains risky business, especially if they choose domestic work.

In order to not have to work as domestic help, there are women trying to learn new skills in tailoring, the beauty industry, and craftwork. Manju Tamang, who also returned home during the pandemic, is learning to make wigs.

“My time was being wasted here. I want to work hard while I am young and fit. I am training to make wigs, which I shall use when and if I get to travel to Qatar,” said 26-year-old Manju.

Manju came home in July 2020 after wasting more than a year trying to get to Iraq, her destination country. She too initially traveled to New Delhi where she waited in a flat in Paharganj with 10 other Nepali women. She was then taken to Dubai where once again, she waited two-and-a-half months for a job. 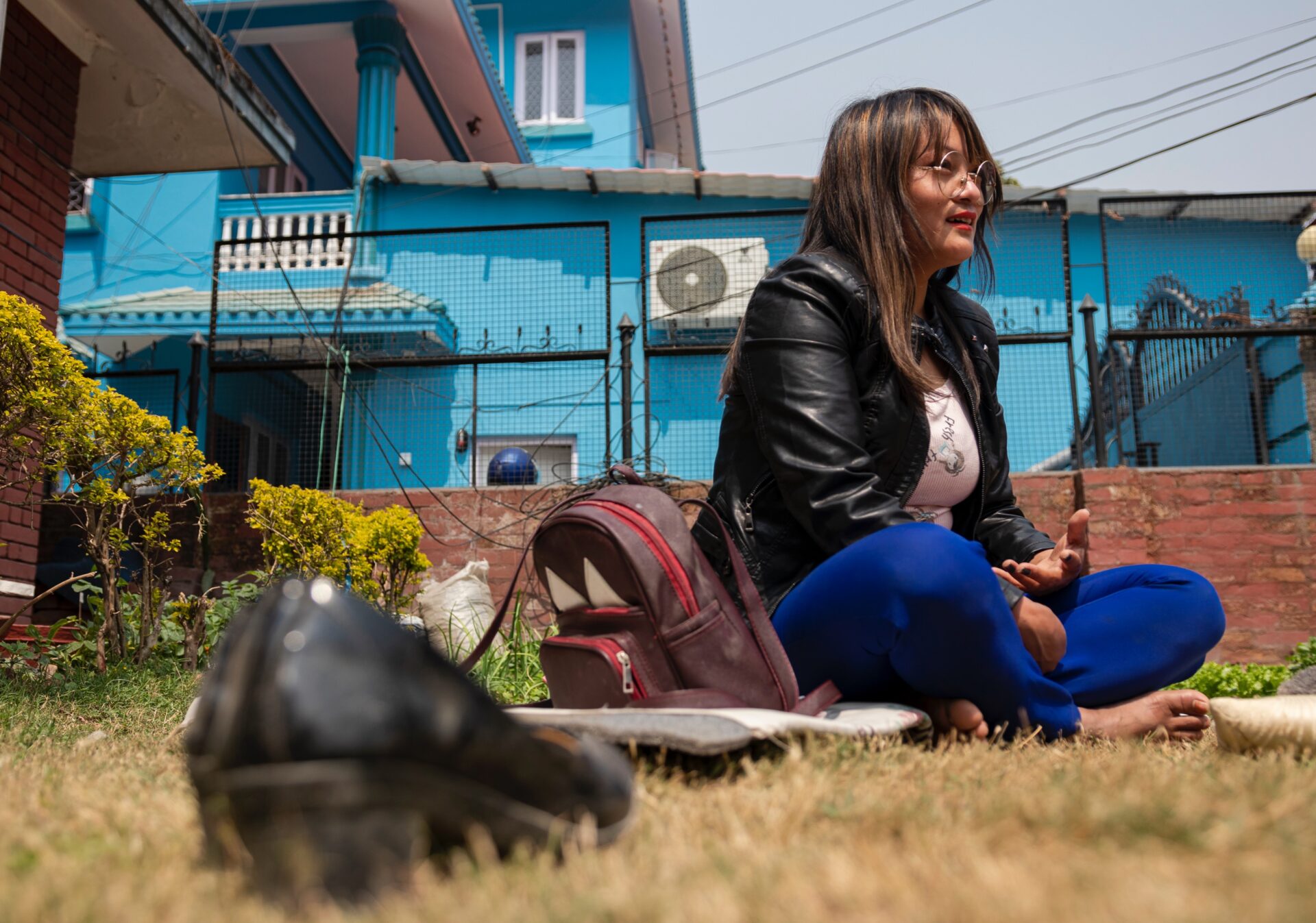 “I promised myself back then that I would never take this journey again. It is filled with risks. I wasted almost a year and I did not even earn a paisa,” said Manju.

Many women plan to go abroad again but after months of unemployment, they have no savings and will need to take out loans at exorbitant interest rates to fund their passage abroad. This could trap the women further in a vicious cycle of migration, but they say they have no choice.

According to Baniya, the migration researcher, the government has done little to help the thousands of women migrants who are back in Nepal.

“The government not only needs to provide them with financial support or employment opportunities but also proper emotional support as well as psychosocial help, including counseling,” he said. “Most importantly, their skills should be mutually recognized, both by the destination and departure countries. Only when there are institutional arrangements, those who choose to return will be able to revive their lives.”

The 32-year-old woman who did not wish to be identified is among those who plan to migrate again.

“I don’t have any skill set, that’s why I had to take that life-or-death journey,” she said. “But now that I am back, there has been no difference in the matter of my happiness. The only difference is that in foreign lands, I had a job and I was unhappy; in my country, I am unemployed and unhappy.”