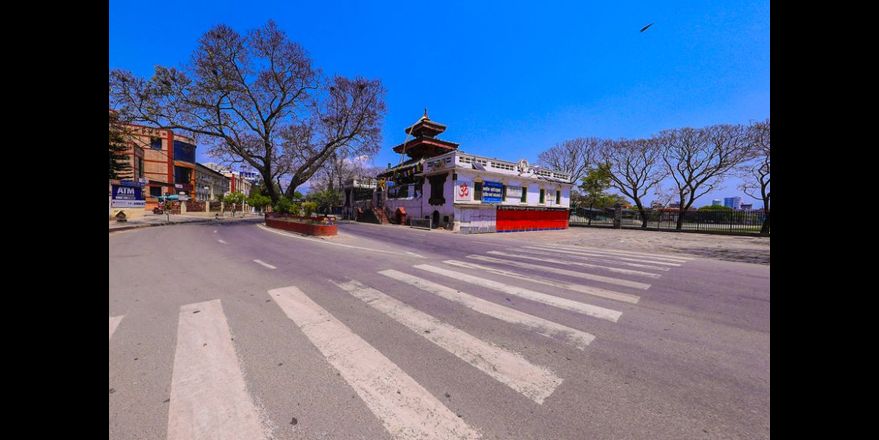 More than half of Nepal’s districts have reinforced lockdown since Covid-19 cases have continued to spike in recent days. As of Monday, 37 District Administration Offices (DAO) have even enforced curfews in a bid to control the spread of coronavirus.

Districts in Kathmandu Valley may be next in line to be shut down as confirmed cases have continued to rise on a daily basis in recent days. On Monday, Kathmandu registered 139 new cases, Lalitpur 15 and Bhaktapur 14, driving the total for the valley up to 168. Since last week, in order to curb the spread, all three districts in the valley have taken various measures, including suspension of all non-essential services. Authorities are now considering another full-fledged lockdown since the measures taken so far have not helped reduce the spread of the virus.

Given numerous outbreak clusters, several areas of Kathmandu have already been sealed off. According to the Ministry of Health and Population, Kathmandu currently has a total of 2,138 active Covid cases. Since the populous capital has witnessed over 100 new cases on a daily basis for the last five days, there is widespread concern about whether the Covid-19 pandemic is developing in a manner that could lead to a serious health crisis.

“Lockdowns are being enforced in districts with a sharp rise in Covid-19 cases, and discussions are underway about a possible lockdown in the Kathmandu Valley as well,” Prem Lal Lamichhane, information officer at the Ministry of Home Affairs, told The Record, adding that DAOs are meanwhile assessing risk levels before a decision gets made.

The total number of cases across the country reached 27,241 on Monday, with the confirmation of 581 new infections. Four new corona-related deaths were also recorded, taking the death toll to 108. Two of the deaths occurred in Morang, while one patient each died in Rautahat and Kathmandu.

Ever since the government lifted the four-month-long nationwide lockdown on July 22, Covid-19 cases have been on a sharp rise. In the weeks since, health workers, police personnel, bank employees and other professionals who have come in contact with crowds of people have been the ones to get infected. When elected representatives and the security personnel of ruling party leaders began to test positive and the leaders themselves had to go into self-isolation, the government reached a state of desperation. On Monday, deputy speaker of Province 3, Radhika Tamang, tested positive. And ruling party Nepal Communist Party (NCP) Co-chair Pushpa Kamal Dahal, NCP General Secretary Bishnu Poudel as well as leaders Amrit Bohara and Sher Bahadur Tamng are among those currently in self-quarantine. They voluntarily went into self-isolation after their bodyguards tested positive for coronavirus.

The government, however, has not taken definitive measures such as contact tracing and proper isolation of infected people in order to control the spread of the virus. Hospitals are running out of beds, the number of health workers is proving insufficient, and cases have continued to rise. In the midst of this, an increase in PCR testing has been a step in the right direction, with the government conducting over 10,000 tests daily.

Local governments are resorting to lockdowns as an ultimate measure to stop the rapid spread of Covid-19, which has flared across the nation. Saptari was the first district to enforce a second lockdown since the first one was lifted in July. Unsure of how else safety measures could be maintained, districts such as Gorkha, Sindhupalchowk, Nawalparasi (West), Dolakha, Rautahat, Bardiya, Syangja, Sarlahi, Sunsari, Mahottari, Bara, Parsa, Banke and Dhanusa have also enforced total lockdown. Meanwhile, other districts — namely Nuwakot, Jumla, Makwanpur, Dhading, Rukum (West), Dhankuta, Tanahu, Udayapur, Surkhet, Chitwan and Lamjung — have enforced partial lockdowns.

Local authorities in Jumla, Jhapa, Darchula and Rupandehi have also sealed off certain areas. Tansen municipality in Palpa and Mathaali municipality in Ramechhap have also been sealed off. According to the home ministry, the district administration in Nuwakot has halted services.

In the days to come, more districts, including the ones in the Kathmandu Valley, may go into strict lockdown yet again.