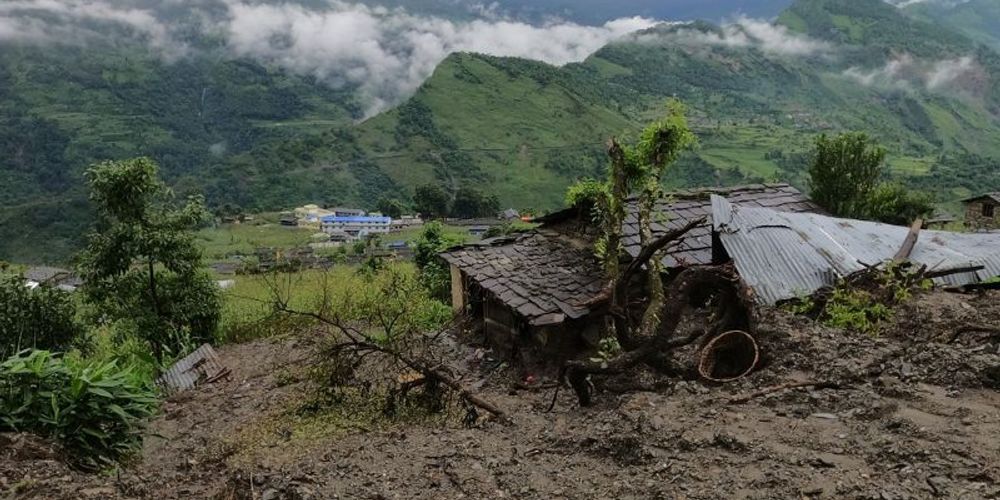 There was no warning of the approaching devastation — no sound of trees cracking or boulders knocking over each other. Premraj BK, who was still in bed on the morning of July 17, remembers only hearing the pitter-patter of rain on the tin roof before his two-storey mud house began to shake.

“For a second, I thought it was an earthquake,” recalled BK.

By the time he stepped out of the door, heavy rain had already brought down a mound of soil and debris, heaped beside a nearly two-kilometre-long road that ran just above the Dalit settlement in Kaski’s Machapuchhre rural municipality. Within seconds, BK’s three sleeping grandchildren were buried.

“There were no cries or pleas for help. They were just gone,” 67-year-old BK said. “We couldn’t do anything.”

Even now, months later, every time the skies above the winding roads rumble, BK’s heart aches for his grandkids, Rejina, Samir and Kushal. But he is also filled with fury, aimed not at the rain gods but squarely at the village’s road construction user committee that gave permission to construct the road above his settlement.

BK, who is also a member of the same committee, alleges that more powerful members and elected officials chose a route for the road that ensured direct connectivity to their own homes, disregarding the risk at which it put his home and community.

“They ignored the technician’s recommendations because they wanted the road to reach their homes,” he said. “I felt helpless when they refused to hear my pleas and imposed their decision on us.”

Some provinces have allocated large amounts of their development budget to roads.  According to media reports, almost all local bodies in Rupandehi spent close to 90 per cent of their physical infrastructure budget on roads, and a similar pattern of spending huge chunks of budget allocated for development on roads was also seen in several municipalities in Rautahat and Sarlahi.

But even as billions are being poured into building new roads, these hefty funds are being allocated without any real-time data about communities’ needs, say provincial government officials. The Ministries of Physical Infrastructure Development (MoPID) across all provinces say they don’t have comprehensive data on provincial or municipal road networks, which consists of all urban, rural and agricultural roads. Most local bodies are still in the process of drafting new transport master plans to replace those that were in place before the federal restructuring in 2017. Without proper data to assess needs, road construction has been informal, uncoordinated and unmonitored, say transportation experts and even local elected officials.

“Since there is no plan in place on how to expand and upgrade road networks, only those connected to leaders with influence end up bagging road projects for their constituencies,” said Gopal Sharma, spokesperson for the Karnali Province MoPID, “and when these roads are dug up haphazardly, it increases landslide risks.”

Take Bajhang for example. Two years ago, between April 27 and May 6, 10 people lost their lives in 10 days in multiple landslides in the district. The landslides collectively damaged nearly 320 hectares of land, turning them into river banks, destroyed property, local infrastructure, and nearly NRs 500 million worth of crops.

An investigation by the Centre for Investigative Journalism Nepal had found that roads built by rampant use of dozers in Bajhang had played a major role behind the devastation trail caused by landslides that year. In total, 165 roads were being built in a haphazard manner using 53 dozers around the time of the landslides in the district.

For Jeewan Guragain, a senior divisional engineer with the federal Department of Local Infrastructure’s ‘Rural Connectivity Improvement Project,’ the lack of data is a major problem. His team is currently working to upgrade nearly 400 kilometres of roads across 16 districts, all without any kind of robust data on the connectivity needs of the country.

“The Nepal government should know how many kilometres of roads run across the country and what state they are in, but unfortunately, that’s not the case,” said Guragain. “Data could help better direct and allocate foreign aid and internal funds to build and maintain roads.”

Lacking data but flush with funds, local and provincial governments end up constructing roads haphazardly, which often have serious consequences for the communities living alongside, as Premraj BK had to learn the hard way.

With extreme rainfall becoming more frequent, these unplanned roads, which are mostly unpaved and earthen, end up getting swept away during the rains, often leading to a loss of lives and property, say experts. This year alone, nearly 300 people perished in landslides across the country, the highest death toll in the last decade. BK’s grandchildren in Kaski were among the dozens who lost their lives because of one such stretch of neglected earthen road.

While landslides occur naturally, the trail of destruction they leave behind could be greatly minimised, according to Anil Pokharel, who leads the National Disaster Risk Reduction & Management Authority.

Pokharel, who was busy planning a week-long list of activities to mark International Disaster Risk Reduction Day beginning October 13, says not being able to design policies to minimise losses to life and property from natural disasters has been “our failure.”

Losers and winners of road politics

When Nepal held its first local elections after nearly two decades in 2017, there was already a system in place — different user committees and all-party multi-stakeholder mechanisms — which was doling out hundreds of thousands of rupees for local infrastructure development, primarily to open new tracks and expand the existing rural road network. Guragain from the Department of Local Infrastructure says that a large proportion of earthen roads across Nepal’s hills were built during this period.

Then too, Guragain says roads were built without regulatory oversight. According to him, since the members of the local bodies were not elected representatives but appointees of the political parties, they often acted in individual interests. These unelected members were only supposed to have an advisory role in these bodies, but they largely influenced how much the development budget was and where it was allocated.

In 2011, after the Commission for the Investigation of Abuse of Authority called for the dissolution of all party mechanisms for corruption and for overstepping their mandate, these bodies were dissolved. But members of political parties continued to shape local development agendas.

Many believed that local elections would help root out the malpractices engendered by these mechanisms, but when it came to casting ballots, people had no choice but to vote for individuals who were once again set to gain from the economics of rural road building. Those contesting local-level elections were often involved in the construction business itself and thus, had a vested interest in building more roads. According to a 2018 report by the Center for Investigative Journalism, a quarter of all elected representatives at the local level have ties to the construction business.

In Myagdi, where 30 people lost their lives in landslides this year, at least half a dozen elected officials have connections to construction companies, according to records from the Federation of Contractors Association of Nepal and the Department of Cottage and Small Industries in Myagdi. These officials have awarded road building contracts in places like Mangala and Raghu Ganga Rural Municipality to their own companies.

Krishna Gopal Tamang, head of the district coordination committee in Sindhupalchok who also works in disaster management, says that the work of locally elected members is only exacerbating the effects of natural disasters like landslides.

“Yes, roads are required for connectivity and are the foundation of development,” said Tamang. “But when these roads are built without assessing their environmental impact, with dozers running amok at the beck and call of user committees, we end up with mostly earthen roads that are not sustainable.”

Reports from various federal bodies, from the Auditor General’s Office to the Department of Local Infrastructure, have also repeatedly flagged poor, unplanned roads as dangerous. But Tamang says their recommendations to build better, more environmentally friendly roads, have been limited to strategic plans and policies that never get implemented.

If these roads were supplemented by safety measures such as gabion walls for slope stabilisation and tree plantation to reduce soil erosion, the damaging effects of landslides could be greatly reduced, says ICIMOD’s Neera Shrestha Pradhan, who oversees water resource management projects.

“While constructing roads in hilly areas, we also need proper planning and management of water bodies,” said Pradhan. “If we fail to do so, there will just be more incidents of landslides and loss of lives and property.”

Most unpaved rural roads often don’t have drainage or erosion protection works, which only leads to more debris sloughing off the hills when it rains heavily.

Geologists and local authorities both believe that unplanned, low-cost, bulldozer-built earthen roads have greatly contributed to the spike in natural disasters and their subsequent fatalities across Nepal’s fragile mid-hills. The latest Economic Survey points out how “dangerous” these “low quality” earthen roads are.

“There isn't a single engineering geologist involved in all those road constructions,” said geologist Shree Kamal Dwivedi. “We should stop blaming the topography and try to understand why roads in similar terrain, like Uttarakhand in India or Bhutan, aren’t being swept away as frequently as ours.”

While roads and connectivity are seen as markers of development on the path to progress, they end up having very real consequences. For Premraj BK, the last three months have felt never-ending. The stillness of the catastrophic morning, and the wailing that followed when BK’s grandchildren were pulled out from the debris, still rings in his ears.

After mourning the untimely loss of his three young grandchildren and being displaced from his home, BK, in July, lodged a legal complaint against the local authorities and the user committee for building the road above his settlement without proper homework. But he says the authorities have been doing nothing beyond shifting responsibility.

“The CDO says that the local officials from my village will look into it, but nothing has happened yet,” he said. “What do I do? Everything around me seems so bleak.”

Santosh Gautam contributed to the story from Myagdi