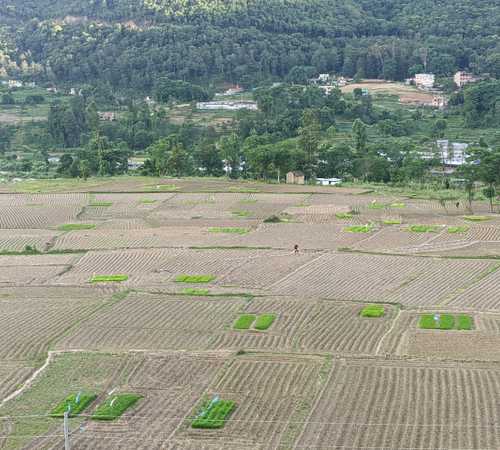 Reading the recent news about fertiliser shortage in Nepal and viewing photographs of people stranded in long, crowded lines risking Covid infections, I felt that a crisis is looming in the farming sector. Farmers spent days just to get a paltry amount of fertilisers, and worse, had to buy it at five times the price in the black market. A large number of farmers have not been able to acquire fertilisers in time to use them for paddy production, the main food crop of the nation, and face a decline in productivity. But fertilisers themselves are a complex component of Nepal’s agriculture sector. As the price of fertilisers increases, and agricultural dependence on them increases along with it, farmers will also have to bear the brunt of the destruction of soil and other elements within the ecosystem. All of these will contribute to further decline in their revenues and have far-reaching consequences in the lives of farmers as well as the food economy of the country.

Around the same time, I happened to read another heart-wrenching story about the plight of farmers in Punjab, India, which gave me an ominous feeling about what is to unfold in Nepal. Earlier in my life, I spent a good four years studying the green revolution, a model of agricultural development that Punjab exemplifies. Many Nepali students like myself were sent to Punjab as our government and donor agencies alike wanted to improve Nepal’s agriculture along the same lines. It is, therefore, not a coincidence that Nepal’s plans and policies since the late 1960s have been modeled to introduce green revolution technology in the country. The 1995-2015 Agricultural Perspective Plan (APP) carried a vision to merely replicate what was done in Punjab. And the latest 20 year plan, the Agricultural Development Strategy (ADS), is based on a similar guiding principle.

Green revolution technology achieves higher production by using High Yielding Seeds (HYV) that require heavy inputs of plant nutrients — nitrogen, phosphorus, potassium, and minerals — as well as water and other chemicals to protect crops from diseases and pests. While it helps increase production, it can also cause many problems. The harsh reality of using this technology far outweighs its perceived benefits. Past examples show that the cost of production increased because inputs, bought from global markets, became expensive. As soil quality deteriorated, more and more such inputs were required. Heavy reliance on water led to water scarcity. Farmers became heavily indebted and entirely dependent on the corporate world for seeds, fertilisers and other inputs. Every time crop production failed or prices dropped, farmers were unable to pay their debts. This debt trap compelled — and continues to compel — many farmers to commit suicide. As is widely known, farmers’ suicides have been a major issue in India’s agriculture sector. In 2019 alone, a total of 10,281 farmers and farm labourers across the country were reported to have died by suicide, although experts believe such deaths are significantly underreported. Because of the crisis in farming, the suicide rate in Punjab has soared 12 times in the last five years.

Farmers’ problems in Asia have compounded with the Covid-19 pandemic. Farmers have not been able to sell their crops or engage in other non-farm activities to generate extra income. The long and strict lockdown in India further intensified farmers’ plight and Nepal’s situation is no different. The lockdown led to a tragic wastage of farm products, especially items like milk and vegetables, which are produced exclusively for the market.

Nepali farmers have now become dependent on external inputs like fertilisers, seeds, and pesticides. In this regard, Nepal is even more vulnerable to global market changes as it does not produce these inputs. The government, however, has a vested interest in continuing an external dependency as this process involves a large amount of money and presents an opportunity for corrupt politicians to amass money from the procurement process. But this is not a new trend; corruption has been entwined with the agricultural sector ever since these inputs first began to be imported.

A question arises about why efforts haven’t been made to produce these inputs within Nepal while billions of rupees is being spent every year on importing them. This year alone, the government has allocated a budget of NRs 10 billion for the purchase of fertilisers, even as the government subsidised stock is expected to meet only about half of the total demand. Farmers are expected to buy the remaining half at much higher costs. This essentially means that at least NRs 20 billion will be spent on fertiliser import in this fiscal year  — by no means a small amount. If the amount subsidised by the government were distributed equally to all of the approximately three million farming families in the country, each family would get about NRs 3,500. This rough calculation gives some weight to the radical argument — made occasionally in the parliament by some politicians — that farmers would benefit more from money distributed to them directly than through various subsidies and programmes meant for farmers, including the money spent on the agriculture ministry and the bureaucracy.

Now is a good time to think of alternative inputs and ways of supplying these inputs. There have long been talks of establishing a fertiliser factory in Nepal, with proposals developed in the past. But, time and again, it has been revealed that fertiliser manufacturing is not a feasible option for Nepal as it needs to import all the raw materials and the manufacturing process itself consumes a large amount of energy. The costs of establishing a factory alone would be immense, with estimates indicating a whopping NRs 100 billion. Then there would be the recurrent costs of natural gas and other raw materials, both of which would have to regularly be imported.

Read also: A future in farming

The best alternative for Nepal is to produce manure with a high content of nutrients from raw materials available within the country. There is a great deal of biomass in the form of manure, leaves and other plant-based materials, wasted organic matters, and more. Production of bio-char is also a possibility. But research into these areas is urgently needed to pursue them as viable alternatives.

It is highly ironic that the political party currently running the government, which promised in its election manifesto to make Nepal chemical free in 10 years, has not taken a single step towards making this happen. Instead, it has assumed fertiliser purchase as one of its primary tasks. Producing alternative fertilisers, especially organic fertilisers, would also create massive employment opportunities at the local level but the government seems largely uninterested in looking into these alternatives.

Apart from fertilisers, dependency on other inputs also adds to this future crisis. Currently, Nepal imports seeds worth NRs 3 billion and poultry feed worth NRs 36 billion on a yearly basis. This dependency may create a situation where inputs may not be available when required. Inputs like fertilisers need to be used at the right stage of crop development, otherwise they do not contribute to yield. The delayed availability of fertilisers that we have witnessed this year during various stages of the paddy season signals that there will be low overall production this year.

The success of the green revolution in Punjab was also largely due to the creation of employment opportunities that supported farmers through production of inputs, manufacture and repair of farm machinery, marketing of products, and more. An agricultural system that depends on the export of inputs is unable to create such employment opportunities and a great deal of hard-earned money leaves the country. Earlier this year, many migrant workers returned to their villages with the thought of engaging in farming, but could not do so as there was no employment for them there. They have now started to return to India for work while their future looks more uncertain than ever before.

It is important not just to keep producing more, but to be self-reliant. A self-reliant farming system, where essential inputs are also produced locally, creates local employment opportunities while making inputs easily accessible to farmers. This helps protect farmers from the monopoly of the corporate sector and frees them from debt and bankruptcy.