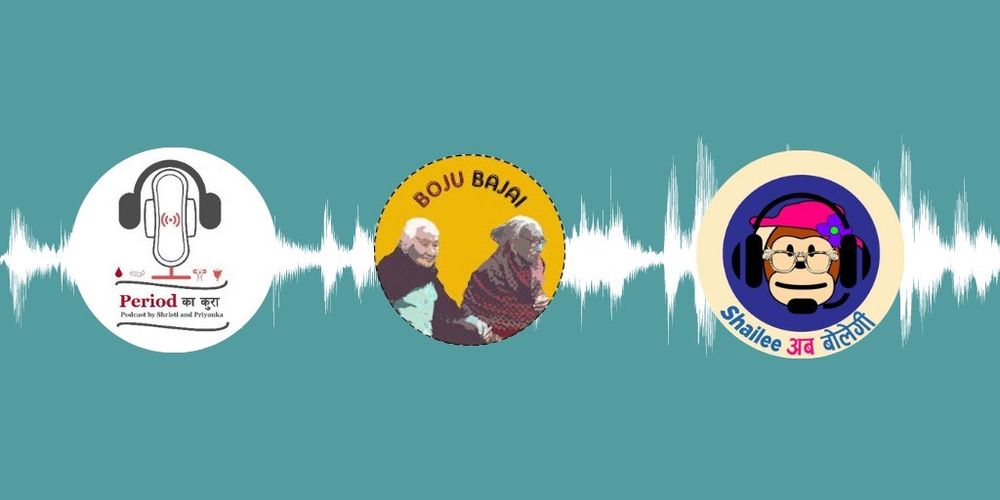 At the beginning of each episode of her podcast, Shailee Chaudhary’s voice rings out a catchy rap track:

Har kisiko jhel rahi thi (Was putting up with everyone)

Duniya say lad rahi thi (Was fighting against the world)

Kanun no se dar rahi thi (Was afraid of the laws)

Lekin ab mey bolungi (But now I will speak)

This casual rap sums up the ethos behind 27-year-old Chaudhary’s podcast, Shailee Ab Bolegi. Chaudhary, a queer Madhesi girl from Birgunj, is tired of listening and it is now her time to speak.

“The story of the rap is simply that I have listened to Brahmical and male supremacy for too long. I refuse to listen anymore and now it is my time to speak,” said Chaudhary, who has been running her podcast, Shailee Ab Bolegi, since September 2020.

Chaudhary heralds a new wave of women podcasters who are taking the Nepali soundscape by storm, fearlessly broaching subjects that are often deemed ‘taboo’ by mainstream society. In doing so, these women are carving out a virtual space for themselves and are looking at issues that the mainstream media often neglects through a feminist lens.

Bhrikuti Rai and Itisha Giri, who run the popular BojuBajai podcast, are relative pioneers in Nepali feminist podcasting, having started their podcast in 2016. They recently reached a major milestone of 100,000 plays on Soundcloud.

“We are just looking at the world and everything around us but our primary focus is the media, the way it writes about the world, and shapes values and attitudes towards people and certain topics of conversation,” said Rai. “Our podcast revolves around gender, media, politics, and in these times, we also cannot disregard technology.”

Rai met Giri for the first-time during a staging of the Vagina Monologues in 2016. The two began talking and bonded over conversations about the Nepali media and politics, which neither of them were big fans of. They decided to turn their guff-gaff, or chit-chat, into a recorded discussion on topics often overlooked by traditional media.

Giri soon moved back to her home in Spain but the duo continued their conversations online, collaborating over the internet. BojuBajai has 51 episodes to date and has branched out into video podcasting and in-person discussions.

Like the BojuBajai podcast, which began with two friends talking, Period kaa Kura also started with two women sharing their personal experiences regarding menstruation, another topic that remains socially taboo in Nepal.

“In our conversations, we used to often talk about the problems I encountered when on my period, and that is why our episodes mostly revolve around that subject,” said Priyanka Budhathoki, who hosts the podcast with journalist Shristi Kafle.

Budhathoki and Kafle started their podcast in September 2020, when Nepal was still in the middle of the coronavirus pandemic.

“We first listed topics for at least 30 episodes and after a month, we decided to create a podcast,” said Budhathoki, who was a radio journalist for three years with Mero FM and  the Antenna Foundation. “When we recorded our first episode, it was so good and we were so satisfied with it that we published  it 15 days earlier than we originally planned to.”

What is common to all three podcasts is their feminist take on various socio-political issues, whether it be societal taboos on menstruation or the representation of women and minorities in the media.

The primary theme of Chaudhary’s podcast too revolves around the struggles of women and queer groups in the Madhes.

“I look at how patriarchy affects women in day-to-day chores and how domestic violence and abuse take a toll on mental health, how coming out of the closet and even accepting the truth that you might not fall in the binary spectrum can be really tiring,” said Chaudhary.

Although the Constitution of Nepal ensures protections for minority gender and sexual identities, Chaudhary said that those laws ring hollow within the bounds of the Nepali social fabric. Her podcast is testimony to the struggle that women and queer individuals face every day while navigating the norms of family, home, and country.

In addition to women and queer issues, Chaudhary has also been a vocal critic of the citizenship bill that was introduced on June 22, 2020, which fails to grant Nepali women the same right as their male counterparts.

“The bill is derogatory on its own but it has an added layer for women in the Madhes. Men and women in the Madhes have cultural relations with India but the Nepal government seems to be afraid of this relationship,” said Chaudhary. “Debates around this issue combine national security, sovereignty, and nationalism with citizenship, which violates the fact that they are approving of unequal citizenship.”

These are issues that BojuBajai too have been raising over the years.

“There are debates on migration, the economy, and exploitation, which are all important, but the issue of women in families where all the males are migrating and how that’s changing society and communities is not talked about as often. So, we’ve tried to shift the lens,” Rai said.

As largely urban women, Rai and Giri both realize that their perspectives are limited and hence, often invite women from different backgrounds to speak on their podcast. Rai and Giri start off their conversations with personal experiences that link to larger, structural conversations about intersectionality.

“If you listen to our episodes, you can see that we have voices from different women, like in the last episodes where we talked about literature, disability, and migration,” said Rai.

Period Kaa Kura also takes an intersectional approach to exploring the multifaceted narratives around menstruation. Budhathoki and Kafle were astounded to find that people around them had a very narrow understanding of menstruation and the issues surrounding it.

“Most people in my circle suggested that we cover women’s issues or human rights but what people didn’t understand is that menstruation is not just about women bleeding; it has societal and traditional aspects that have impacts on women’s issues, social structure, and the economy,” Budhathoki said.

This led the pair to attempt to counter these simplistic views and shed light on the social stigma and cultural taboos that surround menstruating women, such as untouchability in festivities to the unaffordability of sanitary pads.

According to a 2017 review conducted by Population Services International, only 15 percent of women in Nepal use sanitary pads while 85 percent still rely on cloth.

“Buying sanitary pads can be expensive; girls often cannot go to school during their periods; and there are issues of water and sanitation. Women have been going through all these problems for years now, so we thought this is something that we need to talk about,” said Budhathoki.

Their podcast invites a range of guests, from doctors researching women’s health to dharmic gurus, to present their beliefs and values while also attempting to demystify the taboos and stigma surrounding menstruation.

“We brought on Manisha Naath, a guest from Accham, on International Women’s Day. We wanted to learn about chhaupadi but we also found out that she teaches how to use a menstrual cup. We usually think that in remote areas, sanitary pads are unavailable and unused, but her story was different from what we usually hear,” said Budhathoki.

Their bi-monthly podcast has so far covered a variety of menstruation-related issues, including one about a menstruating trans man.

“Generally, periods are associated with women but most people don’t know, honestly even we didn’t know, that non-binary people, especially trans men, are also menstruating. So we teamed up with Mitini Nepal and brought out the story,” said Budhathoki.

All of the three podcasts are independent but BojuBajai has received some funding from non-governmental organizations, including the Open Society Foundations. The women behind these podcasts started out with little to no funds, recording episodes in their bedrooms under heavy blankets to drown out the ambient noise.

BojuBajai, the most popular of these podcasts with 1,000 followers on Soundcloud and around 1,000-1,500 plays per episode, started out with just a handful of supporters but now has 30 supporters on Patreon, a platform that allows individuals to support artists. It is through these funds that they have been able to do live podcasts.

“Instead of numbers, we are looking at the impact,” said Rai. “When we did the Guff- gaff series, we reached out to speakers and they said they had heard about our work and wanted to be part of our podcast. These responses are a reminder and acknowledgement of the work that we are doing.”

For Budhathoki, it is still too early to be tracking their audiences but she said that she is happy if even just one person is listening.“

At least someone somewhere is listening to what we have to say and learning from it,” she said.

The Supreme Court’s recent decision to hold virtual hearings is a step towards ensuring equitable access to justice for all Nepali citizens, regardless of where they live.