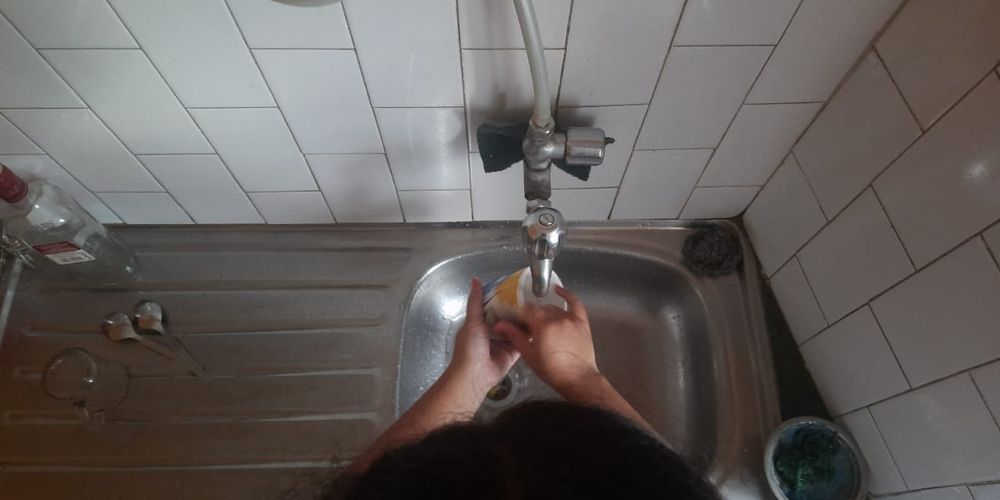 The Covid-19 pandemic has impacted domestic workers on multiple levels, with one of the primary consequences being a significant reduction in employment. Reduced working hours and, in some cases, loss of jobs resulting from fear of the disease and restricted mobility associated with confinement measures have deeply affected many domestic workers. According to Sangita Baniya, president of the Domestic Workers wing of All Nepal Trade Union Federation (ANTUF), hundreds of domestic workers have lost their jobs due to Covid-19 and more are increasingly leaving this sector.

With the lack of regular incomes and inadequate savings, domestic workers are on the verge of starving. Several of them are facing financial hardships to pay their rent and are unable to provide sufficient nutritious food to children and other basic medical supplies.

Gyanu KC, executive member of the International Domestic Workers Federation (IDWF) and general secretary of the Home Workers Union of the General Federation of Nepalese Trade Unions (GEFONT), shared that some domestic workers are even being forced to work in households with Covid-19 positive persons without any precautionary measures. Some domestic workers have also lost their lives while working for their Covid-19 positive employers.

What makes a domestic worker?

Even though the definition of a domestic worker is clear, many consider it as work that does not need any specific skills or knowledge. It is also largely considered work for women, something that is inherent and comes naturally to them. These existing beliefs regarding domestic work make it harder for domestic workers to get recognized for their skilled work and the contributions they are making, and most importantly, to be considered a worker.

It is estimated that there are three million women in Nepal’s labor market, with 90.5 percent working informally. There are 250,000 domestic workers in Nepal, though this figure does not account for the many Nepali migrant domestic workers working in other countries. A survey conducted by WIEGO and GEFONT shows that more than 80 percent of domestic workers in Nepal do not have a written contract. Most of them are employed in live-out arrangements with multiple employers. Nepal’s minimum wage provision does not apply to live-in domestic workers. Domestic work is thus often undervalued, informal, and invisible, mainly carried out by women and children, mostly adolescent girls.

As domestic work is typically undertaken by workers in private workplaces based on informal terms, generally with no employment or work contracts, the workers get paid very low wages and have to work excessively long hours. The informal nature of work relations also makes them particularly difficult to regulate and manage. A significant number of domestic workers are not recognized as workers and do not have access to different rights and entitlements, including social security provided by different national and international labor laws. This sector is not viewed as a dignified sector of work. Domestic workers are not  considered as employees or rights holders who should be treated humanely. These pre-existing vulnerabilities due to their invisibility, employment and wage insecurity, and lack of access to benefits have been further exacerbated by the Covid-19 pandemic.

Article 5 of the ILO Convention on Domestic Workers (C189) states that “each member shall take measures to ensure that domestic workers enjoy effective protection against all forms of abuse, harassment and violence.”

When issues of domestic workers in the world of work were first raised in the International Labour Conference, it was met with pushback. However, the lived experiences of domestic workers were able to influence the delegates present in the conference to take on the issues seriously at the Convention on Violence and Harassment (C190). The standards set by the convention apply to all sectors, including private and public, the formal and informal economy, and irrespective of urban or rural areas. It includes the evolving nature of employment and expands its scope to not only the traditional physical workplace, but also commuting to and from work, work-related social events, public spaces for informal workers, such as street vendors, and the home, in particular for homeworkers, domestic workers, and teleworkers.

With a high level of dependence on their employer, domestic workers are more likely to tolerate violence and harassment, with no voice to fight back. Lack of access to complaint mechanisms, lack of clarity in legislation regarding their access to justice and opportunities to organize and exercise freedom of association also increase their vulnerabilities. In addition to this, poor understanding of what constitutes violence and harassment, low awareness of rights, and a lack of training in occupational safety and health standards contribute to the vulnerability of domestic workers.

There are different kinds of domestic work, which involves different intensities of working hours, such as live-in, live-out, part time, full time, several employers, etc. Having the same uniform pay scale for all these kinds of work is not just. Taking this into consideration, different options can be examined. Since live-in domestic workers tend to work some of the longest hours, separate minimum wages for live-in and live-out domestic workers can be considered, taking into account their respective average working hours.

Another major challenge for domestic work is the informal nature of work with an absence of formal contracts. To cope with this challenge, timesheets, work schedules, and payslips can be important tools to help domestic workers and employers reach an agreement on work schedules, time worked, and wages paid. These can also serve as an important tool for the enforcement of compliance, as they provide a written record.

Labor inspection mechanisms are crucial for ensuring compliance with labour and social security laws. In the case of domestic work, to be effective, laws need to be adapted to allow for inspections of private households as the workplaces of domestic workers.

The two ILO conventions are among the most crucial documents in setting international standards to ensure decent work. Any kind of violence and harassment is a threat to the dignity, health, and well-being of those who experience it, and for their families, enterprises, and for the society. Every domestic worker should be able to freely work without the fear of violence and harassment in the workplace.

Nepal should take this opportunity to ratify both the ILO conventions and show its commitment to translating them into concrete and practical actions. Signing the convention would pave the way for Nepal to push for other destination countries to adhere to its principles to receive women migrant domestic workers from Nepal. Essentially, domestic work needs to be considered as work and domestic workers need to be recognized as workers. That is the only first step that can be taken to ensure they are able to lead a life of dignity.

Kripa Basnyat  Kripa Basnyat is the national consultant for the Violence and Harassment Project at the International Labour Organisation.

Kathmandu Valley goes into lockdown from Thursday, buying some precious time to prepare

As most Covid-designated beds are already occupied, the authorities will have to ensure that the health care system is prepared to deal with the second wave.