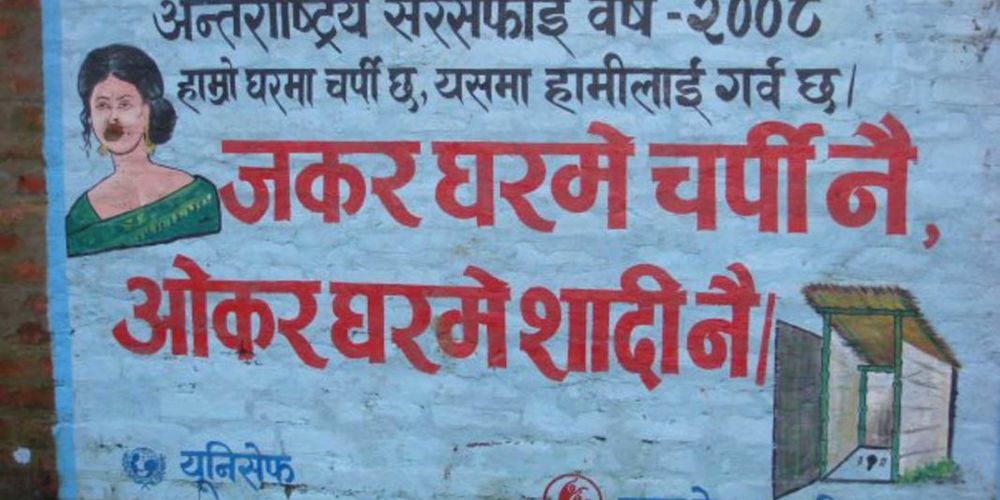 Sita Devi Mahara Chamar of Ward 12, Janakpur was turned away from the ward office when she went to collect her single senior citizen allowance earlier this year. She was told that she would only be entitled to the benefit once she presented a toilet card— proof that her home had a government-approved toilet. So, two months later, after building a toilet, Sita Devi got her card, and was allowed to collect the NRs 4,000 allowance.

The problem is, nobody in her family uses the new toilet. Sita Devi is poor and 14 people live in the two rooms and kitchen that are her house. In order to obtain the toilet card, she constructed a barely functional pit latrine in the limited space that she has. The toilet could only be built right next to the kitchen, which means no one in the family wants to use it. Everyone defecates in a nearby field called Donra.

According to the National Sanitation and Hygiene Coordination Committee (NSHCC), 99.3 percent of Nepalis have  access to toilets. This is a whopping 49.5 percent increase from 2010, when toilet access was at 46 per cent. Nine districts — Bara, Parsa, Dhanusa, Mahottari, Sarlahi, Sindhupalchowk, Kapilvastu, Morang and Kathmandu— have still not met the criteria for being declared Open Defecation Free (ODF). In early July this year, the Ministry of Federal Affairs and General Administration issued a circular to all local level authorities  directing  them to hasten progress to becoming an open defecation free country by September 2019. From a development-oriented Kathmandu perspective, the story of ending open defecation in Nepal looks like a fight about to be won. But go to one of the areas where the push for toilets is on, and the government’s methods start to look coercive, penalizing the poorest for their inability to meet targets set by the government and donor agencies.

A controversial element is a requirement that citizens need to possess a “sanitation card” -- Sita Devi’s toilet card -- for access to social security schemes, birth and death certificates, citizenship certificates, school and land registration. In other words, the rights and entitlements of Nepalis have become contingent on their possessing a non-statutory document.

Shankar Limbu of the Lawyers' Association for Human Rights of Nepalese Indigenous Peoples says that this is unconstitutional.

“The constitution guarantees individuals the right to a dignified existence and citizenship certificate for all who are eligible, and denying people citizenship based on the sanitation document should not be legal under any circumstances.”

Ever since the Sanitation and Hygiene Master Plan of 2011, declared “ODF [Open Defecation Free] as the bottom line,” the government’s priority has been to get one toilet per household (‘ek ghar, ek charpi’ is the campaign slogan). But there are no steps to address the reasons why building a useable toilet is so difficult for some: landlessness, homelessness, and extreme poverty.

“Building a toilet needs to be a household’s responsibility, just as having a chulo (stove) is,” says Devendra Jha, member secretary at NSHCC. He believes their model, which is to offer no subsidies, has helped Nepal’s progress towards ending open defecation. “Until 2011, in the Tarai, people would get NRs 1,000 to build toilets; NRs 1,200 in the hills, NRs 1,500 in the mountains. This created dependence and didn’t yield results. Now we work with communities, not for communities, and that helps build ownership.”

The withdrawal of subsidies, which had been in place till 2011, has been the single biggest change in how donor agencies and the government have pursued ODF status. The Community-Led Total Sanitation (CLTS) approach adopted in 2011 explicitly argued against toilet subsidies, and Nepal’s 2011 Plan declared: “there should be no subsidy for household level toilets except for the ultra poor.” This policy had the strong support of donor agencies, UNICEF in particular.

Journalist Mithilesh Yadav, who has been following the ODF issue for a number of years, reported in 2015 that some families in Siraha were taking out loans at up to 60 per cent annual interest rates in order to finance construction of their compulsory toilets.

UNICEF WASH (Water Sanitation and Hygiene) specialist, Siddhi Shrestha, says that the organization’s anti-subsidy stance is based on research. “Subsidy is not in our dictionary. Reward and recognition is the modality of CLTS.”

“Before the Master Plan of 2011, lots of pans were distributed, but people weren’t using them for toilets, and even people who could afford to build toilets were waiting for the government handouts. The situation now is much more sustainable,” he told me.

For the government, it is a win. Not so for those forced into building toilets they cannot afford, or bear the state’s anger. Journalist Mithilesh Yadav, who has been following the ODF issue for a number of years, reported in 2015 that some families in Siraha were taking out loans at up to 60 per cent annual interest rates in order to finance construction of their compulsory toilets. The District Development Committee (DDC) had a budget for “program implementation” that did not involve financial help for toilet construction for poor families.

“The ODF campaign has been particularly disastrous for Madhesi Dalits,” Yadav told me. “Imagine you are a sukumbasi living in a small shack on land you don’t own. What sense does it make to take loans out to construct a toilet just so you can get a citizenship certificate?”

UNICEF’s Shrestha says that making sanitation cards a prerequisite for getting citizenship certificates is an “effective tool.”

“The card serves as a trigger. If you need it to access government services, it becomes about pride, ‘oh this person has a toilet, I should too.’ There have been questions raised about the bad implications of tying social services to toilets, but it is one tool of many to trigger people.”

Devendra Jha is similarly unequivocal about the necessity of sanitation cards for citizenship certificates.

“Human rights organizations protested the sanitation card. We let the civil society and politicians decide on the implementation of this, and the results have been great. Making sure that people can’t get the documents they need until they build toilets means that the toilets are built, and public spaces are cleaner as a result,” Jha says.

Public spaces may be cleaner, but the current heavy-handed implementation of the ODF objective means that people— many of whom might prefer to not have to defecate in fields if they had the choice—  are routinely harassed.

Samni Devi Mandal of Ward 12, Janakpur, told me that her son-in-law was beaten by the police and taken into custody for two days for public defecation in late April. He was let go after he paid a fine of NRs 1,000 rupees, a significant amount of money for her family.

Samni Devi says that various NGOs have promised to help her build a toilet for many years now, but none have followed through. Every morning at around 5 am, she goes with her mother and her daughter, a lota of water in hand, to a nearby field to defecate. Sometimes, police officers stand in the field and chase the women with sticks, berating them for being uncivilized and a public nuisance.

Rameshwar Karki, Deputy Superintendent of Police of Dhanusha, says he is sympathetic to the fact that many people don’t have places to defecate besides open fields, but that it is the police’s duty to make sure public places are clean, and deploying officers to “address the issue” is part of that.

“ODF has been a big priority for local government, and they are the ones who tell us to catch people. We don’t arrest them, only take them into custody for a couple of hours. I understand the plight of the poor, but public health and sanitation is important.”

Members of local government in Janakpur claim that they are under pressure from the federal government. According to Mithilesh Kumar Karn, a Ward Chair in Janakpur, it is “difficult” for him to recommend people for citizenship certificates when he knows they don’t have a toilet, as per federal directives.

“The government is desperate to declare every district ODF before Visit Nepal 2020.Taking every measure possible to make sure people have toilets is a big part of that, even if it sometimes involves force,” Karn says.

The ODF goal aims to improve the quality of life of people by addressing the root causes of ill-health, and the health risks associated with open defecation are undeniable. Public health interventions across the world say that safe and clean toilets are essential to tackling diarrheal diseases, illnesses that cause malnutrition and stunt growth in children, and a whole host of concerns.

But the ODF program as it is currently being implemented, targeting the poor in Tarai districts as deficient citizens, has become yet another tool of state repression and control. The move against subsidies and towards “individual responsibility” -- strikingly neoliberal in its ethos -- puts the onus of public health on families who struggle to make ends meet, and the efficacy of the campaign depends on sanctioning systematic humiliation and punitive measures. Even if every district in the country does manage to declare itself ODF by September this year, it will have come at a significant human cost. What is needed are not just individual actions, but structural solutions. That would be a win to boast about.