A history of the residence of Nepal's former royals. 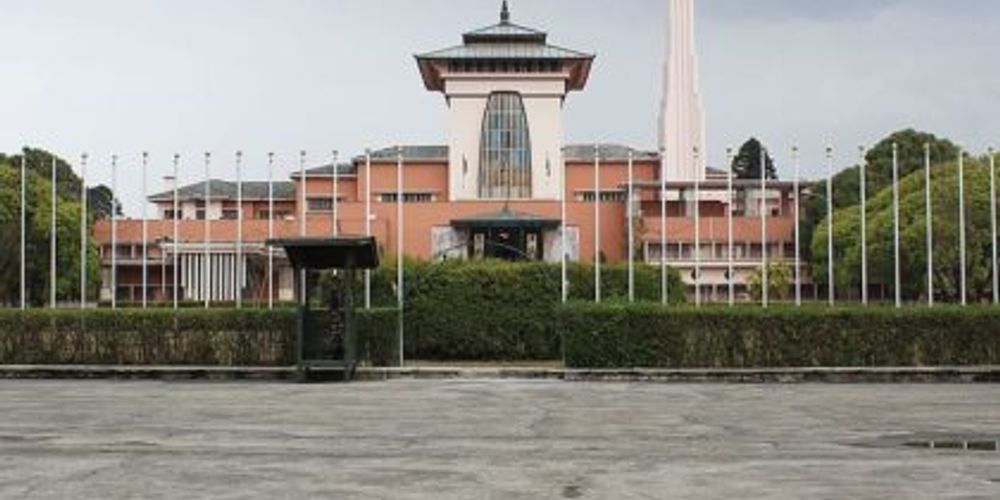 Bryony Whitmarsh is an Associate Dean of Global Engagement at the University of Portsmouth in the UK. She completed a PhD in South Asian Studies at SOAS, University of London on Narayanhiti Palace Museum in Kathmandu.

Bryony has published three articles on her research. She was in Kathmandu over the summer and The Record caught up with her to discuss her research on Narayanhiti, the Palace Museum, and the Republic Memorial. Below are edited excerpts from the conversation:

How did you first become interested in studying Narayanhiti Palace Museum for your PhD?

I studied Ancient History and Archaeology for my bachelors degree, so material culture studies have informed how I see the world. I got to know Nepal a bit when I was a volunteer in a village in Dolakha district in 1998-1999 and became really committed to museum studies after visiting the Patan Museum. Following a ten-year career in museums, I then joined the University of Portsmouth in the UK, where I taught in the University’s School of Architecture. My teaching focused on the historiography of architecture and interior design, material culture, and museology.

After 1999, the next time that I could afford to return to Nepal was in 2010. I came and tried to understand the impact of what seemed like an unending series of significant and violent political and social events on all my Nepali friends, why many of them had chosen to leave the country, and what this thing called the Maoist conflict was. Because I come from a museum background, when I visit a place I often visit a museum to try and understand that place. I visited Narayanhiti Palace Museum to try and understand this recent past but I got no answers whatsoever! It left me with more questions than answers! By 2010, my interest in architecture also meant that I was very much interested in viewing the world from a spatial lens. It was immediately obvious that these empty rooms in Narayanhiti Palace focused on ceremonial aspects of the monarchy and did not reveal much about Nepal’s recent history.

Because it was my first time back in Nepal after a long gap, I started reading Manjushree Thapa’s book Forget Kathmandu. Manjushree Thapa also wrote a short article in one of her edited collections about her experience of walking through the Museum (the essay “In Our House” in The Lives We Have Lost) and what the Palace Museum does not show. Sanjeev Uprety also wrote an article on the Museum in Nepali and Abhi Subedi did the same in English and Nepali. Taken together these three reflections were a really useful set to start to understand the way in which visitors navigate the displays. Whilst the Palace Museum was intended to become a depoliticized space of culture and tradition, these visitors noticed what was not on display and questioned why.

What was your PhD about?

One of my research themes is the way that political confusion, instability, and uncertainty have impacted on collective memory and are reflected in the way that Narayanhiti palace museum and the Republic Memorial (Ganatantra Smarak) have been conceived. My work offers an account, based on ethnographic fieldwork at the Narayanhiti Palace Museum that uncovers a broad social and political arena in which the past is made and unmade by numerous social agents including politicians, civil servants, museum professionals, and ex-palace employees, all of whom had something different to say.

How did you get access to the museum and staff?

I started off from the outside by meeting high-level government bureaucrats. Things did not really progress until I got to meet some of the museum staff by chance. The staff were somewhat marginalized (see below) and they saw an opportunity to raise their voice through my research. I was someone who was interested in them and their experience of the transition and asked questions about the museum and what was being put on display. It helped a lot that I showed no interest in the royal massacre and that I did not ask any questions about it.

Why and when was Narayanhiti Palace originally built?

Following Jang Bahadur Rana’s coup in 1847 the Shah kings were reduced to playing the role of figureheads. The Rana family built 41 palace buildings that shifted the centre of control outside of the ritually defined borders of Kathmandu. The original palace at Narayanhiti was one of these and was built for Jang Bahadur Kunwar’s fourth brother, Ranodip Singh Kunwar Rana (1825-1885) in 1847. King Privthvi Bir Bikram Shah (1875-1911) was moved to the Narayanhiti Palace in the 1880s by Ranodip Singh, then the Rana Prime Minister, deliberately disassociating the King from the palaces from within which the King drew his authority (especially the ritually significant Hanuman Dhoka Palace).

Its name is made up of two words ‘narayan’ (a name of the Hindu god Vishnu, whose temple is located to the south east of the main palace building and of whom the Shah kings presented themselves as an embodiment), and the Newari ‘hiti’ (meaning ‘water spout,’ located opposite the Narayan temple).

Narayanhiti palace looks visually very different from other former royal or Rana places. People have strong opinions about how it looks from the outside. Can you explain why that is and what message the Shahs hoped to achieve?

There appears to have been a specific instruction to potential architects from Mahendra for a new palace that combined traditional and modern forms. We can see this in the sketches proposed by Robert Weise and Benjamin Polk. So the eventual architect, Benjamin Polk from the USA, did not decide to combine the traditional and modern but was following a brief. Narayanhiti was also intended to be a clear break from the Ranas. Mahendra turned to Nepali (specifically Newari) architectural forms, in direct contrast to the foreign neoclassical buildings of the Ranas, in order to emphasize the internally generated authenticity of Nepal and to legitimize his rule and the Panchayat system.

So, the official narrative played up the traditional elements of the Narayanhiti palace design—restoring what the Ranas were portrayed as having ‘taken away’. The traditional elements were seen in the hipped pagoda roof with the pinnacle modeled on the Shah palace at Nuwakot, the temple tower, the vast doors decorated in bronze plate (designed by Nepali artist Balkrishna Sama), and the use of brick as a facing material. Design decisions were also taken in order to enable the Palace to be brought into service as an effective symbol of office, rather than a luxurious royal home.

Architecture in Nepal is often articulated through the rhetoric of modern and traditional, ‘traditional’ referring to the Newar architecture of the Kathmandu Valley. Contemporary writers viewed the introduction of concrete, steel frame buildings as foreign and a challenge to the country’s unique architectural heritage. Therefore, outside of the public narrative, the commissioning of a large, reinforced concrete building with a steel frame in the late 1960s, certainly attracted criticism within the design community.

The new Narayanhiti Palace was also both representative and constitutive of Mahendra’s role in constructing the Panchayat system. Mahendra’s reinvention of the monarchy required the royal institution to appeal both to tradition and modernity: He was simultaneously a Hindu king who protected and guided his country and a modern political leader concerned with the development and progress of a nation state. The new palace was cultivated as a symbol to highlight his appeal to both tradition and modernity. The palace physically arranged the city-space around it, through its dominant position at the head of a new axis, now known as Durbar Marg.

Can you talk a bit about who designed Narayanhiti Palace?

The palace building was designed by Californian architect Benjamin Polk, with the interiors by British luxury firm Asprey & Company. Building work was carried out by Nepali government engineer Shanker Nath Rimal. Polk and his wife Emily returned home to the USA in 1964, leaving Rimal to manage construction. The construction was overseen by a committee chaired by Prince Gyanendra.

Interestingly, whilst Benjamin Polk entered Nepal for business meetings only, it was his wife, Emily Polk, who stayed in Kathmandu (in the Hotel Royal) and proposed several interior designs herself for the palace. These were more traditional designs that were intended to bring the monarchy back to their roots. They were, I anticipate, not at all what Mahendra wanted.

I found Emily Polk’s sketches of these designs in a library in New York, alongside an oral history interview that Emily Polk gave to the Society of Women Geographers in Washington, D.C. in which she discusses her time in Nepal.

Was there any public criticism of the Palace design, construction, and cost?

There was definitely some criticism of the Palace while it was being built. It was a huge and highly visible demolition and building project taking place in the middle of Kathmandu for several years (from 1964 to 1970). This involved demolishing much of the original Narayanhiti Palace and demolishing other Rana palaces to create Durbar Marg. Some architects remember discussions about the Palace being compared, negatively, to a railway station. However, due to the restrictions on what could be said in the Panchayat era, hardly any of the criticism was public.

There is some evidence—as reported by a relative of the London-based interior designers—that Mahendra lost interest in the project, too. Possibly due to some muted criticism, significant design changes were made during construction. This included not having marble on the outside of the Palace, as planned, but using Nepal-made ‘Chinese’ bricks instead. There was also no separate inauguration ceremony of the Palace. The new Palace was only officially launched as part of Birendra’s wedding celebrations in early 1970.

When did the Palace become a Museum?

The Palace became a Museum as a result of the May 28, 2008 Constituent Assembly decision to end the 239-year-old Shah monarchy. However, it was not until February 26, 2009 that the main Palace doors swung open to admit ordinary citizens into Narayanhiti Palace, marking its transformation from a royal residence to a Palace Museum.

The Palace had been open to the public earlier on, during the early 1990s. This was linked to the post-1990 end of the Panchayat regime and attempts to be open by the monarchy.

In Part 2 of this interview, Bryony Whitmarsh explains how the Palace became a Museum, how its contents can be “read”, and the unique connection the staff have to the Palace and the Museum

The downfall of Bhimsen Thapa

Who will rule the country now?