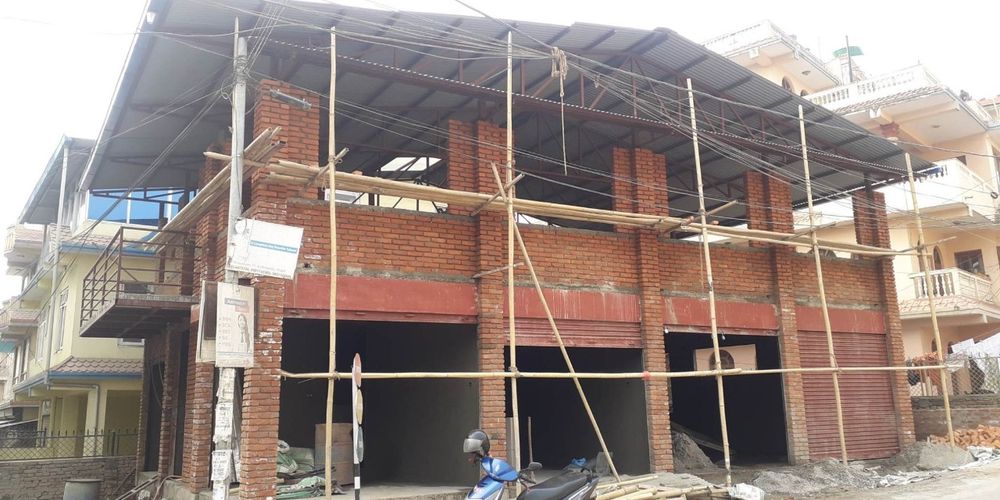 All around the sleek new Ring Road are buildings made primarily with steel, most of them having sprung up in the span of just a few years. While some of the buildings are residential homes, most others have been built to house restaurants and party venues.

Built mostly after the 2015 earthquakes, these prefabricated buildings have been built entirely with steel parts, with their appeal lying in the fact that they are much cheaper to build in comparison to those made with reinforced concrete. They also take less time to build and 60 to 70 percent of their parts are reusable, which is why they are easy options for those setting up businesses on leased land.

An investigation led by the Center for Investigative Journalism-Nepal (CIJ), however, shows that many of these buildings have been built without taking safe building protocols, including design approval from local governments, into account.

“People are building three or four-story buildings on four-inch poles. The pillars are weak, but the slabs are sturdy. In case these pillars collapse, the buildings will just turn into sandwiches,” said Pravin Laghu, an architectural engineer.

What is worrying is that such buildings are no different from the ones in the Gongabu area that were flattened by the 2015 earthquakes, according to Rajan Suwal, a structural engineer.

During the 2015 earthquake, over 160 people lost their lives in the small, concentrated area of Gongabu, which suffered the most damage in the Kathmandu valley. Among new settlements in the valley, Gongabu was the worst hit by the earthquake as it took almost a week for rescuers to recover dead bodies. Most of the buildings housed hotels and guest houses; some of them were as tall as nine stories, even though they were only two-and-a-half stories on paper.

Given the weak geological structure of the Gongabu area, which is located on the banks of a river, such buildings should never have been allowed to be built in the first place. It is alarming that the same mistakes that were made in the Gongabu area before the earthquake are being repeated at several locations across the valley.

A dearth of human resource

Despite the popularity of these steel structures in the Kathmandu Valley, there is a severe lack of a skilled workforce.

Although some government and private institutions provide training in steel metal and grillwork, most of the trainees go abroad after completing their training.

“The welders we train earn Rs 8,000-10,000 here in Nepal but they can make Rs 30,000 to 40,000 if they go to the Gulf countries after completing their training,” said Ishwar Lal Shrestha, who has been teaching welding at the Balaju School of Engineering and Technology for the past two decades.

“Welding does not just mean joining two parts together. One has to also consider if the iron or steel is thick enough, if the weld is deep and melted enough, and if the finishing is done well,” said Shrestha.

For instance, the ampere of electricity for the welding machine is determined by the thickness of the iron or steel being welded and the welding electrode. Untrained welders are not aware of this fact, according to Shrestha, but they are often asked to work on steel buildings.

While constructing steel buildings, it is necessary to first put in place ‘elephant feet’, which are concrete blocks with enlarged bases that help absorb shocks from any earthquakes, said Santosh Kumar Adhikari, engineer and chief of the Design Department at Madhyapur Thimi Municipality.

“That is not how steel buildings should be designed,” said Suwal.

Pillars should be erected by tying them with nuts and bolts above the ground level where groundwater cannot reach. If the pillars are plunged into the earth directly, they will rust and the structure will become weak, said Bir Bahadur Khadka, a structural engineer at Kathmandu Metropolitan City.

Engineers say that many steel buildings constructed without getting the design approved are weak because they do not take into account the amount of load those buildings are expected to bear.

Bhattarai initially claimed an engineer had overseen the construction of the building, but eventually conceded that he had constructed the building as per his own design. He said he had gotten Amar Shrestha, a local technician working at the Manakamana Engineering Workshop, to do the grillwork. Amar meanwhile said that while he had never undertaken fabricator training, he was well experienced as he had been providing fabrication and welding services to six to eight steel buildings every year.

Bhattarai further said that he had got the design for the building approved by the Madhyapur Thimi municipality, but he refused to show CIJ the design and the building completion certificate.

After looking at the photos of Bhattarai’s building, engineer Suwal concluded that the building does not appear to have been designed at all.

“A well-designed building does not have such weak connections. The columns and beams of this building look pretty small, and it is not earthquake resistant,” he said.

Such careless construction was taking place long before the earthquakes. On October 20, 2005, the roof over the waiting hall at the Manipal Teaching Hospital in Pokhara collapsed, killing 11 people. The roof had been built with steel.

According to engineer Narayan Gurung, who has studied the incident, the design dictated that corrugated sheets be used for roofing over steel trusses. But concrete had been laid over the tin roof in order to reduce the noise made by the rain, and a layer of slate had been put up for aesthetic purposes. The steel truss could not bear the additional load.

“If floors are being added with getting the design passed, the Manipal case can repeat in many places,” said Gurung. “We don’t need to wait for another earthquake.”

According to engineers, in a steel structure, iron sheets should also be placed on second-floor beams and welded together; a three-inch layer of RCC-type concrete should be placed on top of that. But these days, people are simply putting thick layers of concrete over corrugated iron sheets.

“In buildings where the corrugated sheets are not joined with frames, the concrete slips towards one side and the pillars and beams to the other. If the upper floor load is too much, the whole building can collapse,” said Suwal.

Similarly, Pradeep Paudel, a structural engineer at Lalitpur Metropolitan City, said that the city does not classify steel buildings separately and does not have specific data about such buildings.

Santosh Kumar Adhikari, head of the design division at Madhyapur Thimi Municipality, too said most steel structures in the city were built without getting the design passed and even those that had gotten their design passed for one floor ended up building several floors.

Clause 39 of the Local Government Operation Act mandates that the local government can issue fines of up to Rs 500,000 and even demolish the building if they are found to have been built without getting the design approved. In case an approved design has been altered, a fine of up to Rs 200,000 can be issued and the building demolished. These legal provisions are rarely implemented.

Madan Sundar Shrestha, mayor of Madhyapur Thimi Municipality, said the municipality would soon order demolition of buildings that do not comply with regulations. The municipality, he said, has plans to set up a 20-personnel city police force, which will inspect buildings, among other duties.

But not all steel buildings are flimsy; they can be quite sturdy if constructed properly. In fact, since 2015, many multi-storied buildings in Kathmandu have been constructed primarily of steel. The Air Cargo office at Tribhuvan International Airport, several showrooms of vehicle retailers including Tata and Hyundai, and almost all buildings where the distance between two pillars is high, are made of steel.

“Steel structures are stronger than concrete ones, but only if proper building protocols are followed,” said Suwal.