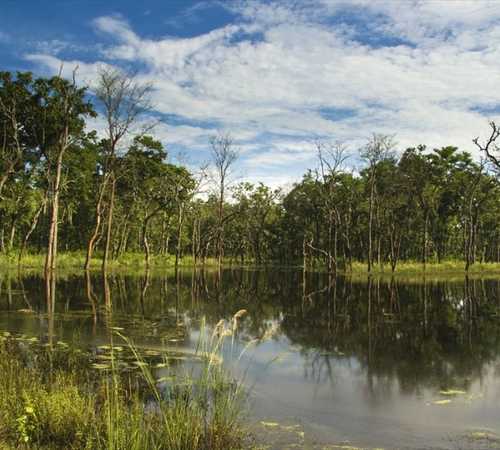 Many people feel a sense of joy and triumph knowing that Nepal has made progress in its conservation efforts. Over the last 50 years, the country has had a great story to share: nearly extinct and endangered animals have been preserved and protected. There are now approximately 700 rhinoceros, 230 Bengal tigers, 170 elephants, and 460 Asiatic buffaloes. These and other endangered animals live in 20 different protected areas (PAs) in Nepal, which cover over 23 percent of the country's total landmass.

But behind this joyous accomplishment, there is another side to the story. Conflicts between humans and wild animals annually cause around 20 deaths, some 30 individuals sustain permanent disabilities, and many families lose their livelihoods as the animals that come out from the PAs eat and destroy their crops, vegetables, and even fish farms.

The persistent frequency of the incidents demonstrates that the government’s existing approach to addressing the issue is not working. Letting already impoverished and dis empowered local people continue to shed more tears and spill more blood is not just unjust but also morally wrong.

Two fundamental questions are useful to begin the conversation to address this problem: Conservation for whom? How can we, in good conscience, continue to justify the providing of mere monetary compensation to those who endure repeated sufferings in the name of 'conservation’?

In Nepal, state-led conservation didn’t appear until 1973, the year King Mahendra established the Royal Chitwan National Park. Until the 1960s, there was an opposite tradition among the Nepali rulers: hunting endangered animals. For them, hunting was also a way to cement their diplomatic ties with the British Raj. In stark contrast, the local communities depended on the forests and grasslands that hosted wild animals and offered other resources for their livelihoods and coexistence.

It is worth noting that Nepal’s first national park was established right after the first world environmental conference held in Stockholm, Sweden, through which Nepal gained global recognition for establishing PAs. However, the local communities’ sufferings that the PAs’ establishment triggered, did not receive much attention. Stan Stevens (1997) and Joanne McLean and Steffen Straede (2003) have noted in their studies that thousands of people were displaced when Chitwan National Park was established. This example of displacing and dispossessing the local communities from their land, which irreversibly altered their lives and livelihoods, is just one amongst many.

To its credit, in 1995 and 1999, the government amended the laws and the policies to introduce community-oriented resource management, especially for people living in the buffer zone areas. Yet, in practice, even in the federal structure, the community-oriented approach remains top-down, as the local officers in charge of the PAs hardly decide anything without the approval of their regional and federal bosses. Consequently, the well-intended laws and policies fall short of addressing the everyday challenges that the communities face.

Read also : The dark side of Nepal’s national parks

Covering over 170 sq. km and established in 1976, KTWR is one of the first Ramsar sites, a bird sanctuary that is also well-known for preserving the Asiatic buffalo, or arna.

But this PA has a very sad story as well: over the last two years, wild elephants killed 12 people who live around the KTWR buffer zone. In 2019, of the 30 people killed in Nepal’s 20 PAs, eight of them were in KTWR.

During the rice-harvesting season, the villagers, particularly in Saptari’s Kanchanpur Municipality, and Udayapur’s Belaka Municipality, stay awake at night to protect their rice fields from the elephants. When things don’t go right, some people often get injured and even lose their lives. Almost all the villagers have stopped farming corn; the elephants like the crop so much that despite all the scare tactics, they keep ravaging the fields.

What makes the issue so urgent is that the ‘park-people’, whose livelihoods are based on the natural resources, face imminent threats not just from wild animals but also from the security forces or the ‘men in green’ who are in charge of protecting the PAs. A fisherman in Saptari District who fishes in the Koshi River, which is part of the KWTR, complains that he and many others are routinely kicked, slapped, and poked with sticks by the security forces when they do not give the security personnel their catch, particularly the big ones. People like him depend on fishing to feed their families.

Some might think that the compensation that the government distributes should offset the local communities’ suffering.

The compensation amount varies, depending on the incident. A family who loses a member gets NRs 10,0000, an injured person NRs 20,000, and a seriously injured person NRs 200,000. For the loss of livelihood, the amount ranges from NRs 10,000 to 30,000. Of the total compensation the government distributed nationwide during the last fiscal year, the KTWR accounts for more than 45 percent (NRs 2,58,77,520).

The logic behind allocating the amounts for compensating the survivors is hard to fathom. But most importantly, the compensatory process rarely proceeds smoothly. Nor does it happen quickly. On average, it takes 3-6 months or up to a year plus.

The evidence shows that each year, people die, get injured, or face further financial hardships. Yet, the government and conservation organizations continue practising the existing conservation model in which someone’s life can be exchanged for as little as USD 10,000. Under their watch, every year, people get disabled and become orphans and many families get pushed further into poverty.

Read also : Nijgadh Airport to be Catastrophic for Nepal’s Tiger and Elephant Populations

One villager asked: “Are wild animal lives pricier than humans or is it simply because we are poor?” Such questions speak to not just the state’s inability to address the local people’s grievances, but also the fact that politically connected individuals have blatantly turned the KTWR into a grazing area. Some villagers estimate that at least 50,000 cattle freely roam inside the PA. And while the government turns a blind eye to such practices, the villagers can only whisper the cattle owners’ names, as they fear for their own safety and security.

The impact that grazing has had on the PA is anyone’s guess; but it has certainly exacerbated the local communities’ sufferings, as the wild animals come out of the PA to forage, since inside the park there is not much left for them. The outcome: increase in human-animal conflicts are more likely.

The impoverished and politically disenfranchised ‘park-people’ are unjustly paying the price of the existing conservation model--with their lives. The government’s merely providing monetary compensation to these families cannot be justified anymore. These are not incidents that occur once in a lifetime. They happen every year. These human-wildlife conflicts can and must be stopped.

Time to rethink our conservation model

Throughout human history, we humans have realized that sustaining our existence relies on the well being of the natural environment. Protecting nature and its species has moral, ethical, and aesthetic implications. And we want to pass on rare species to the next generation.

Nepal’s PAs also help us fight against climate change, and they generate economic opportunity for local communities. The increased number of homestays and small-scale businesses that serve tourists shows that PAs do help the local economy. However, those who depend on forest resources remain marginalized and underserved. They still experience hardship, poverty, injuries, deaths from wild animal attacks, and harassment by the security forces.

The government is aware of these dynamics. However, it has yet to take decisive steps to address the communities’ grievances.

Five decades of experience demonstrates that Nepal’s conservation practice benefits the state, tourists (domestic and foreigners alike), and those who have businesses in the tourism economy. But it does nothing for the local communities, who perennially suffer from deaths, injuries, and livelihood loss as they face off with wild animals and security forces. And these problems occur not just in KTWR; people are losing their lives in other PAs as well. It is time to begin thinking about a radically different conservation practice that serves not just the few, but everyone, especially local communities, who remain economically marginalized and politically disempowered.

For the people living besides the Bagmati in Teku, every year the monsoon brings much devastation. And as local authorities do little to help, residents have no one to turn to but themselves.