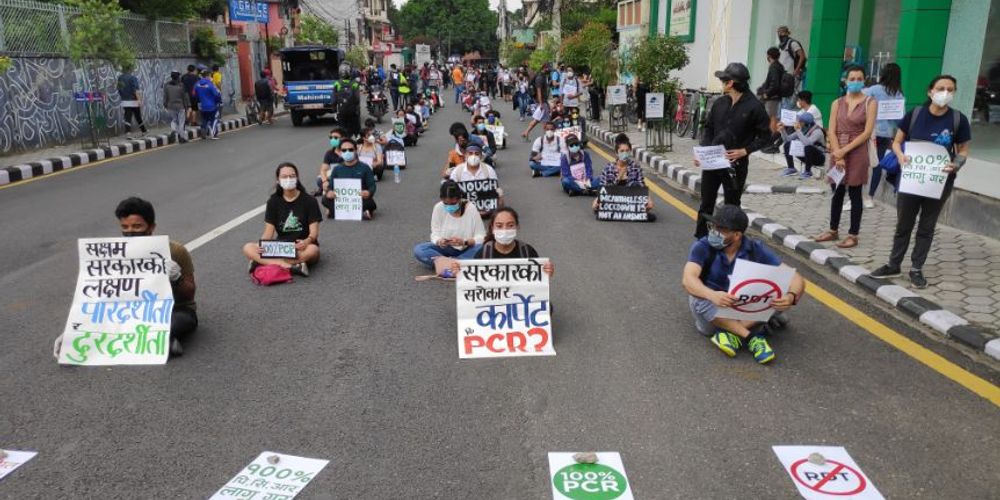 Since our last article on how two different realities existed during the initial period of lockdown, many things have happened, and evolved, in Nepal. From those early days until now, we have both experienced the varied impacts of the Covid-19 crisis. Here, we attempt to look at how Covid-19 has not just wreaked havoc on our lives but also brought to light the existing inequalities among Nepalis and how the government’s approach to dealing with the pandemic has created chaos. We also examine how people are starting to hold the government accountable and whether the protests that are taking place on the streets speak on behalf of all Nepalis.

Around two months ago, my grandfather fainted and hit his head on a stone spout in a fairly remote part of Dolakha. We got him to the district hospital within two hours of the incident. The hospital knew that they could not treat him there and asked us to take him to Kathmandu. But bureaucratic red tape got in the way when we tried to get an ambulance and obtain a travel pass. It took us almost another 5-6 hours to get the pass. When he was finally admitted at Chauni Hospital, it was already 1am the next day. After the initial examination, the doctor told us that my grandfather would have been fine if we had brought him in 4-5 hours earlier. Because of the prolonged period between injury and hospital admittance, my grandfather had completely lost the ability to control his bodily functions and could hardly speak a word. Today, owing to the care he’s been provided, he has regained some control over his body and can talk properly.

Four days ago, I got a call from my mother. She was distressed and barely able to speak. The news she shared was horrifying. In a voice filled with dread, my mother told me that a distant cousin had committed suicide. My father had called her to say that they had performed the last rites, and that he couldn’t talk much more about the matter. My mom categorically told me not to ask dad for more details. I had met this cousin just once, but I knew his family pretty well. The faces of his mother, wife, and children continue to haunt me.

These days, I try to deal with distressing news by distracting myself. But then I find myself thinking about how we all are coping. Back home, my family members are relying on the money I send them, as I am the only one earning now. The only other economic activity, if you can call it that, is my mom’s subsistence farming. The cousin who died was living through a similar plight. He had just bought a jeep on loan, constructed a house, and wished to pay off his interests with the earnings he would be making from his vehicle.

Both the cases mentioned above are representative of and provide us a glimpse of the shadow pandemic occurring throughout the country. We (the writers) recognize that we are among the few who still don’t have to worry about food and who enjoy some privilege. We cannot fathom what is going on in the millions of households throughout Nepal. Recently, one of our friends asked us, “If anything happens at home and you need to rush to the hospital, what will you do? I am asking because I do not have any vehicle, and I do not have any rich uncles. What have you planned?” The prompt answer we provided was, we’d call an ambulance. But the question bugged us, and we realized that we’d assumed that the government would take care of us and our family. In such a situation, other Nepalis, just like us, too hope the government will help, because every other option seems far-fetched. And in the context of the larger shadow pandemic, we can’t help but be bewildered by the government’s priorities, and even by some of those calling the government out.

Knowing Nepal’s capability for dealing with crises, most Nepalis are not making impossible demands of the government. Most of us know the dire state of our health system and about the dismal health-professional to patient ratio. We also know that medical professionals are clustered in a few cities in Nepal. The only thing Nepalis have asked for is empathy, which has been completely missing in any address made by any official in power. Even the opposition was not vocal about the government’s handling of the crisis until very recently.

But everything started to change after PM Oli’s address to parliament on June 10. Besides sounding absolutely autocratic and making some preposterous claims, he revealed his lack of grasp of the problems Nepalis face. He made strange suggestions, such as asking people to opt for traditional foods over pizza, so as to build immunity to the coronavirus.

As we’d mentioned in our previous article, we believe that the government operates with a middle-class mindset. The PM’s assuming that every Nepali actually has a choice about what they want to eat betrays a mind that is out of touch with the real Nepal. The PM’s address further validates our claim that the upper-echelon leaders are indeed middle-class centric. Further, those representatives who responded to the PM by banging on the table and clapping are also informed by the same outlook.

The closed Facebook group ‘COVID-19 Nepal: Enough is Enough’ was largely responsible for bringing together voices of discontent on June 9. The first protest, initiated by 50-60 young people who had connected over social media, was a much-needed act of civil disobedience for voicing concerns about government mismanagement. The group had a clear vision about what their demands were and what they were speaking out against. They were also clear about how they felt the government should tackle the ongoing pandemic.

As soon as the group congregated on the streets to protest, the protest became a public event. Thus managing and steering the protest towards an initial goal and objective was not an easy task for the group. Such “spontaneous” and “self-organized” protests,  “without any party affiliation”, have sprung up all over the country. Since the group is self-organized, the initial group no longer has a strong voice and the same command they did on June 9, nor does the larger group have a shared identity or shared values.

Thus, some group members have started questioning how things are playing out, even as they try to prevent the overall aims from getting diluted. What has followed shows how the movement is getting affected by the middle-class ethos of those who are protesting on behalf of lower-class people or people without resources. The group’s statement on solidarity uses the term “organizer”, but the group is no longer an organizer. By now, it is mostly just a facilitator.

During this short period, we have seen how a middle-class identity seems to be largely determining the protests’ agenda. We believe everyone who is taking part in these protests first needs to realize that they got preferential treatment just because they are the ‘sukilo mukilo’ from Kathmandu, especially considering how Nepal’s police handled the protests.

Some of the people involved with the protests committed gaffes right out of the gate. One social influencer, for example, dismissed all the social and civil movements that have happened till date. The influencer labeled the current movement the “real uprising”, and even went so far as to say the People’s Movement of 2006 was fueled by “daru-chicken”. We are not saying whatever happened in 2006 and after was faultless, but you cannot disregard the fact that those movements were crucial in establishing many rights and freedoms that Nepalis enjoy today. Either that person does not know Nepal’s history or is simply ignorant. Nobody can deny that the People’s Movement of 2006 was largely led by independent people, rather than by purely party-based organizers.

Before the current movement gathered momentum, Nepal had seen a few, sporadic, protests throughout the lockdown. Some were responding to the tragedy of six Dalits in Rukum losing their lives to caste-based violence. The killings have already spurred protests in Rukum and other parts of Nepal, including Kathmandu.

But by distancing themselves from these and other other social issues, which are equally important, the ‘COVID-19: Enough is Enough’ movement is already alienating a lot of Nepalis. Thus, to bring more people into the fold, we also need to protest social injustices in our society. We need to incorporate all these issues.

The group called for another protest on Saturday, in which their role as an organizer was more pronounced. The group has done well to strategize and plan protests in order to gather a sizable crowd so that their voice will be heard. They do seem to be trying to create a shared vision that will bring together people from across the spectrum, which is essential for disrupting the status quo. However, they first need to realize that people participating in such movements have their own vision of why they are participating and what they hope to achieve. The challenge is to create an overriding narrative that speaks on behalf of all Nepalis suffering through the shadow pandemic.

A 2012 Swedish study of various social movements across Europe shows there’s been a shift in who participates in political movements--from those primarily associated with workers’ movements and the mobilization of the working class to participation by those from mostly well-educated middle-class backgrounds. This has been termed “middle-class radicalism”. The current protests in Nepal resonate with those findings. Meaning, we cannot let this movement become merely a  “Sukilo Mukilo Andolan”--an expression of only the middle class.

Let us be inclusive of all the demands that are vitally important for creating a more equitable society.We also know that despite all our efforts, the educational levels and social attributes of the participants in civil disobedience will roughly mirror their social class. But by including issues of social injustice, and not just those related to Covid-19, we will be able to integrate the causes of all classes, castes, and status groups. The majority of youths in Kathmandu, who were too young to get involved in earlier andolans, now have the opportunity to become agents of and intervene in another historical movement. It all hinges on whom they choose to protest on behalf of.

Puspa Poudel  Pupsa Poudel is a student of anthropology.