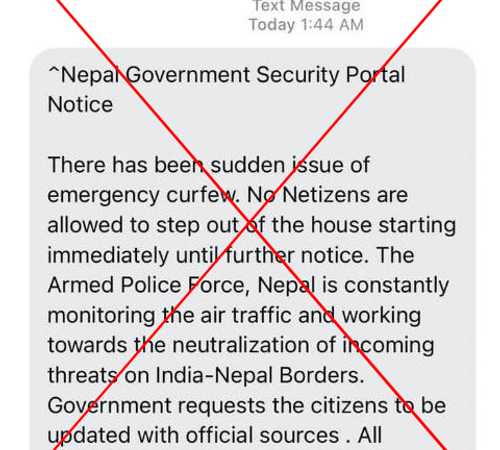 In the wee hours of October 19, the cell phones of many people in Nepal beeped with WhatsApp and SMS text messages about a curfew notice. The text message titled ‘Nepal Government Security Portal Notice’ and purportedly sent by “PSC” using Nepal Telecom’s bulk SMS service caused confusion among the receivers. Many users took screenshots of the notice and shared it on Facebook and Twitter. The screenshots shared on social media show that the notice had started circulating from around 1 am on October 19. The message’s purported sender was the PSC, which is commonly understood as the acronym of the Public Service Commission, the human resource agency of the government. However, no such notice was found on the commission’s website.

The text message in broken English read:  “There has been sudden issue of emergency curfew. No Netizens are allowed to step out of the house starting immediately until further notice. The Armed Police Force is constantly monitoring air traffic and working towards the neutralization of incoming threats on India-Nepal Borders. Government requests the citizens to be updated with official sources. All services except for Hospitals are shut down until further notice.”

Ramesh Thapa, a resident of Manmaiju in Kathmandu, told South Asia Check that he initially got nervous after reading the message on his mobile phone on Monday morning. “At first I thought they might have imposed a curfew amid growing cases of COVID-19. But after pondering over the message, I concluded that the Public Service Commission would not issue a message related to national security. Also the language of the message was a bit unusual so I thought it must be a hoax,” Thapa said.

Some social media users have speculated that the government’s bulk SMS system could have been hacked, while others tagged Nepal Police and telecommunications service providers on Twitter, calling for an investigation into the matter.

South Asia Check contacted the spokespersons of the Nepal Police and the Armed Police Force to inquire about the notice. Nepal Police spokesperson Kuber Kadayat said the notice was false. “This information is incorrect. We have asked our cyber bureau to investigate it,” he said. Similarly, spokesperson of the Armed Police Force Raju Aryal said no such [curfew] decision had been taken and they were looking into how such notice was circulated.” On October 19, the Ministry of Home Affairs also issued a press statement stating that the SMS was misleading, baseless and wrong. The ministry said an investigation was ongoing.

Covid19 Roundup, 6 May: Cases reach 99 and lockdown extended till 18 May