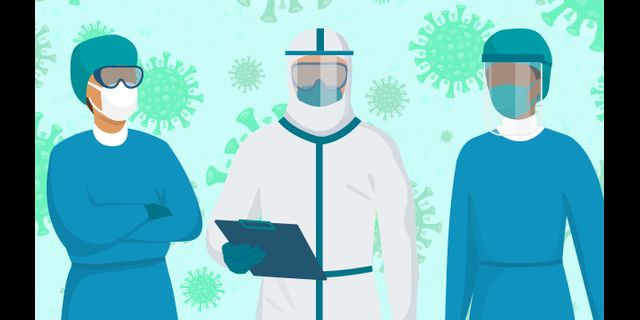 Twelve days into lockdown, Nepal reported its first native case of the new coronavirus disease. Now it’s a matter of time before the virus is found to have spread from an infected family member to the community, and from one community member to the next. Epidemiologists call this the beginning of an outbreak.

As the country braces to deal with the inevitable, Nepal’s fragile healthcare system, already lacking in equipment, infrastructure, and human resources, looks to be completely overrun. On the frontline, health workers want protective gear to ensure safety of staff as well as patients.

“We need PPEs but I haven’t seen one yet,” says Grishma Shrestha, a doctor in the emergency room at the BP Koirala Institute of Health Sciences, referring to the set of gowns, gloves, glasses, masks, visors, etc., that must be worn by health workers operating in and around patient care during a pandemic.

Lacking proper Personal Protection Equipments (PPE) as recommended by the World Health Organisation, Shrestha and her colleagues have taken to wearing scrubs, covered tightly by gowns, and eye protection. For now they have gloves but the hospital is running out of masks.

In addition to emergency room duties, Shrestha also advises patients who need regular care and attention. One of her recent patients was a woman, pregnant with twins, who had returned home to Nepal from Patna to escape the Indian lockdown and sought medical counselling. Around patients like her, doctors have to be especially vigilant of their own hygiene.

“We get anxious if one of us has a cough, we bathe after every shift, we wash all our safety gear every night,” says Shrestha. “Without proper PPEs, what else can we do?”

Ever since the lockdown started, hospitals have closed all outpatient departments and now only take patients into emergency. The flow of patients has decreased but the danger of infection still remains high. Hospital procedures have also been changed.

Outside emergency rooms, patients are first screened for fever. Those without fever are let in and those with high temperatures are screened for more symptoms and sent to a clearly demarcated area according to need.

But not all hospitals have enough room or equipment to deal with an onslaught of testing requirements. The wide media coverage and panic over the coronavirus has taken the spotlight away from people with chronic illnesses and treatment requirements.

In fact, those who are co-morbid - when someone has more than one serious health condition - and immuno-compromised need greater protection from the coronavirus. Without protective gear, it is impossible for doctors to know if they themselves are vectors.

“The decision to make each hospital screen, test, care, and cure coronavirus patients has got to be scrutinised, even revised,” says Sandeep Chandra Shrestha, a consultant physician at Birta City Hospital in Birtamod. “The lockdown did great in reducing spread, but without protective gear what is to stop hospitals from becoming the new epicentres?"

Lacking protective gear, some hospitals have turned patients away for fear of infection. In reaction, authorities have taken hardline and populistic measures, threatening to cancel their registrations. Besides all this, health workers have also had to deal with the mental stress of being isolated from their families, and some have been evicted by landlords who are misinformed and paranoid about getting infected.

It’s not only doctors and nurses involved in care and treatment who need protective gear. Hospital and administrative staff involved in consultation and transfer also must be protected. This is yet to happen in practice. 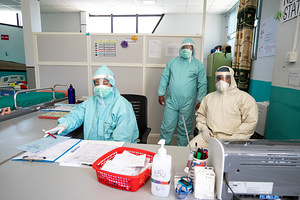 A week ago in Baglung district an elderly woman, who had tested positive and had a history of asthma, was to be transported for isolation and care. Officials at Dhaulagiri Zonal Hospital did not have an ambulance on standby and borrowed one from a local organisation. Their driver delivered the vehicle, left the keys inside, and ran away.

With no vehicle arriving even after dinnertime, her family was worried about her chances of survival and wondered if they too were infected. Her neighbours were nervous about community spread. Later, a district public health officer risked infection upon himself and brought the woman to hospital. Nobody else tested positive.

The lack of PPEs is a major deterrent in Nepal’s response to the pandemic and one that directly threatens the lives of health workers. Besides the possible cost in human lives, infections to health workers would also strain the already threadbare workforce. A notice published on 2 April by the Ministry of Health and Population shows how badly the health system needs trained personnel:

“URGENT: The Department of Health Services issued a circular instructing hospitals to excuse pregnant women, new mothers, and employees with long-term illnesses from serving coronavirus patients. Whatever the circular says, the Ministry wants to make it clear that, in order to deal with the pandemic, all health services must be resumed without delay; hospitals may not give leave to employees and must ensure complete attendance of all staff.”

The government has been continuously calling for ENT specialists, anaesthetists, staff nurses, pathologists, etc., to sign up. When the last deadline passed for applications on 28 March, only a single specialist had applied.

“They offer 90-day contracts on very little pay and without protective gear. Who will take care of my 80-plus parents if something happens to me?” a Kathmandu-based anaesthetist told the Record, requesting anonymity for fear of reprisal.

The other gap is the lack of testing kits. Until now, Nepal has only done 1,688 tests since the evacuees were brought home from Wuhan on 16 February. Countries hit by the pandemic have combined lockdown with mass testing to various degrees of containment.

The Government of Nepal tried to address this shortcoming by buying rapid test kits from China. This resulted in a scandal with allegations of corruption in billing and the whole public tender process. Testing kit acquisition was then placed in the army’s procurement process.

The efficacy of the test kits themselves were also called into question and critics say Spain rejected the very same kits citing a lack of reliability. Currently, the 75,000 rapid testing kits await verification.

When a swab sample is taken from a patient, it is stored in a Viral Transport Medium (VTM) tube, a tiny plastic container that is then sealed and sent to a lab that has a real time Polyamerase Chain Reaction (PCR) machine installed.

A pathologist manually extracts the sample, exposes the RNA to a reactive chemical, and constructs a synthetic DNA out of the sample. Next, these are multiplied in a PCR machine, and later tested against a known sample.

Sometimes the test may show a negative result if only tested against a wider genetic family category, or it may test positive for flu. For absolute certainty, a further test then has to be done against a known Covid19 sample, like the Wuhan strain. It can take up to ten hours from extraction to a reliable result.

For a machine to run at full capacity, the auxiliary equipment also needs to match the PCR machine’s specifications. Contaminations, to both machinery and pathologists, must be avoided at all costs.

As in all stages of caring for and handling of patients at hospitals, protective gear is also required for testing. Close contact with a sample suspected to carry the coronavirus, whether inside a patient’s throat or at the lab, warrants full protection.

The complexity and delicacy of this process means it has to be done at hospitals in a fail-safe environment, not inside triage tents and temporary facilities. The largest facility in Nepal, at the National Public Health Laboratory (NPHL) in Kathmandu, can test 900 samples per day.

“Getting the samples to Kathmandu is a bigger challenge because hospitals across the country don’t have enough VTM tubes,” says Prakash Aryal, a biomedical engineer at the NPHL. “So, we have been testing as many samples as we receive.”

The government received a lot of flak for buying rapid testing kits, but everywhere such rapid tests are primarily used as a screening method, as part of a layered diagnostic strategy against this pandemic. Patients who test positive in this stage are then kept away from everyone else until the results of rapid tests are confirmed or negated by real time PCR machines.

Not all designated testing labs can run as many tests as centres in Kathmandu. Only late last week, the government delivered portable PCR machines to four hospitals it sees as centres for testing and patient care.

“We are grateful to have this equipment, but it can only test five samples per day,” said Jagadish Joshi, doctor and spokesperson at the Seti Zonal Hospital, a designated hub hospital and testing centre, in Kailali.

It was in Kailali where the first family transmission was confirmed on 4 April, signalling the pandemic could soon get out of control. The same evening, the government decided to begin mass testing thousands of migrants and their contacts in Kailali and Kanchanpur districts of Sudurpaschim Province.

With only 870 ‘PPE gowns’ in stock in Sudurpaschim as of 6 April, health workers there nervously head into their next shift and wait for additional government support before mass testing begins.

“Test kits, safety gear, we are waiting for all of that to arrive,” says Joshi. “In the meantime, we make do and carry on.”

The article was revised on 8 April to include a step in the testing process. The sample test is manually extracted by the pathologist, whereas the earlier version mentioned that the test was extracted directly by the PCR machine.