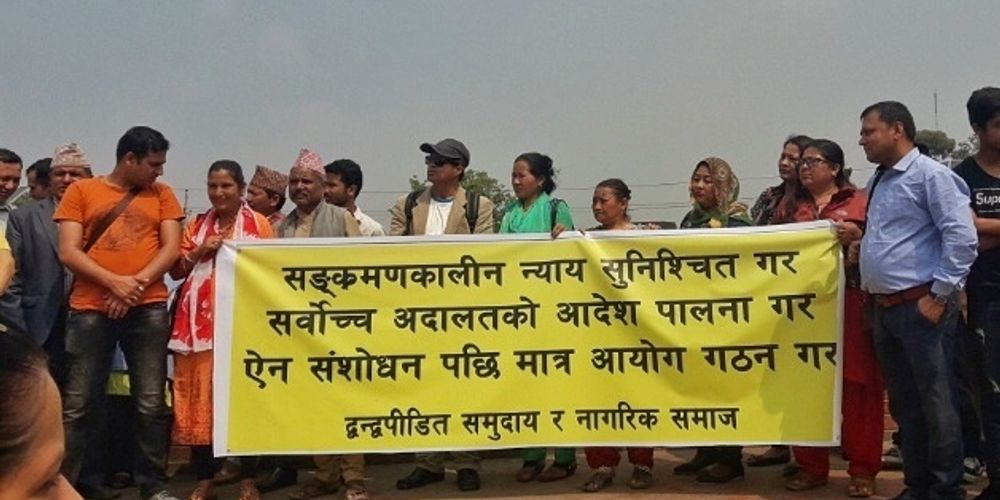 Nepal’s peace deal, which ended the decade-long armed conflict between Maoist insurgents and the government in 2006, had given families of conflict victims hopes for justice. But 14 years on, justice has become a mirage for them.

“To get justice, we did everything there is to do, from the district level to the UN’s highest rights body. They failed us,” says Gita Rasaili. Her sister Reena Rasaili was raped and shot by army officers during a security operation at her house, in Kavre, on February 12, 2004.

The first information report (FIR) was registered two years after the incident. Police arrested one of the accused, Kaji Bahadur Karki, a junior noncommissioned officer, in 2010, while another accused, Lieutenant Saroj Basnet, was never arrested, let alone brought to justice. In addition, the Kavre District Court acquitted Karki in December 2013 on the grounds that he needed to be tried at the Army court.

As promised in the Comprehensive Peace Agreement, the country became a federal democratic republic, and a new constitution has been adopted. But the government still has not addressed the pleas for justice by thousands of conflict-affected families. The accord had promised their cases would be examined. “The leaders secured their desired political posts and power, but that does not change the truth about what happened. Our struggle for justice continues,” says Gita.

Hundreds of thousands of Nepal’s conflict-affected families face a plight similar to Gita’s. As per the Nepal Conflict Report 2012, during Nepal’s conflict years, over 13,000 people were killed, and over 1,300 were subjected to enforced disappearance. Conflict victims claim that over 70,000 people were displaced, at least 20,000 were tortured, and thousands of women were raped during the 10-year-long armed conflict.

It should be noted here that not a single person involved in rights violation during the conflict period has been prosecuted so far. This is because the state itself is involved in most of the rights violations. The National Human Rights Commission, in a recently released report, has stated that among the cases of violation investigated by the commission, 779 (65.16 %) were committed by the state, 287 (24.03 %) by the Maoists, and 38 (3.19 %) by both the aforementioned parties.

On Friday, on the date the peace agreement was reached, Human Rights Watch and Advocacy Forum jointly released a report titled No Law, No Justice, No State for Victims: The Culture of Impunity detailing the post-conflict situation in the country. “The authorities in Nepal are preventing police and prosecutors from pursuing conflict-era cases of human rights violations, undermining the rule of law and efforts for security sector reform,” read a joint statement by the organisations.

The 94-page report tracks 62 cases of extrajudicial killings during the conflict period as well as the post-conflict period, detailing the progress of the cases over the period. The report says that over a decade later, “there has been little progress toward prosecutions, despite court orders requiring investigations to proceed, with the police and prosecutors saying that the government has told them these cases will be handled by transitional justice mechanisms. This inaction is helping to sustain an ongoing pattern of serious violations, including extrajudicial killings and torture by security forces.”

Read also: The NHRC finally lists rights abusers publicly, but will the perpetrators ever be brought to book?

“The government of Nepal has maintained a robust commitment to impunity, protecting alleged abusers at the expense of victims’ rights, and undermining the rule of law,” says Meenakshi Ganguly, South Asia director at Human Rights Watch. “Rather than providing truth and reconciliation, the weak transitional justice structures have been used to create delays and make excuses to avoid criminal investigations or essential reforms.”

Despite the poor rights record of the country, Nepal got re-elected as a member of the UN Human Rights Council last month--largely on the basis of the separate reports on the rights situation in the country that were presented to the council by national and international rights groups. Nepal also got a free pass by claiming that it had initiated the transitional justice process and promulgated a new constitution. Essentially, Nepal got re-elected because the international community--relying mostly on claims made on paper--grossly ignored the country’s actual rights situation.

Nepal’s transitional justice process, the last remaining task of the peace process, has been virtually in a coma for the past two years. The government had in 2015 set up two commissions--the Truth and Reconciliation Commission and the Commission of Investigation on the Enforced Disappeared Persons—to look into conflict-era cases. The commissions did collect over 60,000 complaints from conflict-affected families. But the terms of the commissions ended without their investigating and resolving a single complaint over their tenure. The government appointed new commissioners this January, but they could not take on the cases because they were new to the field. Most importantly, the government has not amended the Transitional Justice Act--as it had been instructed to by the Supreme Court--to address the concerns of conflict victims in the past five years. The conflict-affected families are thus beyond frustrated.

In the statement, they have urged foreign donor governments and the UN to pressure the Nepal government to stop impeding justice and to amend the transitional justice legislation to comply with the Supreme Court rulings and obligations under international human rights law. Most affected families feel they’ve been let down by everyone--although international communities advocate for rights and justice, in practice, they willfully ignore the government’s continuing to act with impunity.

The Supreme Court in 2015 struck down a dozen provisions of the Transitional Justice Act and ordered the government to amend the laws, in particular to remove provisions providing amnesty for grave violations. Instead, the government filed a review petition against that verdict. The court denied the appeal in April 2020. But the Nepal government still appears unwilling to amend the laws, which would allow justice to be delivered to conflict victims.

This is also true of more recent cases of rights violation. In Bardiya District, the current public prosecutor told Advocacy Forum that he could not even locate the records of any of the cases in which court orders directed the police to investigate rights violations. Human Rights Watch and Advocacy Forum found a similar situation in cases registered with the police and prosecutors throughout the country.

“The routine defiance of court orders by police and prosecutors in these cases is not only weakening the judiciary, but also the rule of law," says Om Prakash Sen Thakuri, director of Advocacy Forum. “Victims feel insecure and vulnerable, as the state continues to protect alleged perpetrators, while victims are shunned and pressured.”

The continuing impunity regarding human rights violations is undermining donors’ efforts to support accountable governance and the rule of law, say the rights organisations. Nepal’s international donors, including the UK and the US, which support programmes to strengthen policing and rule of law in Nepal, should press for concrete action to end impunity for abuses committed during the conflict period as well as ongoing abuses. In the absence of prosecutions in Nepal, prosecutors in other countries should investigate universal jurisdiction cases against Nepali suspects in international crimes.

“Nepali officials like to use the rhetoric of human rights and the rule of law to please international audiences, but successive governments’ actions and inactions tell the true story,” says Ganguly. “Never-ending impunity is causing great suffering to victims and their families, making ongoing abuses more likely, and preventing the country from moving forward to a better future with accountability and the rule of law.”