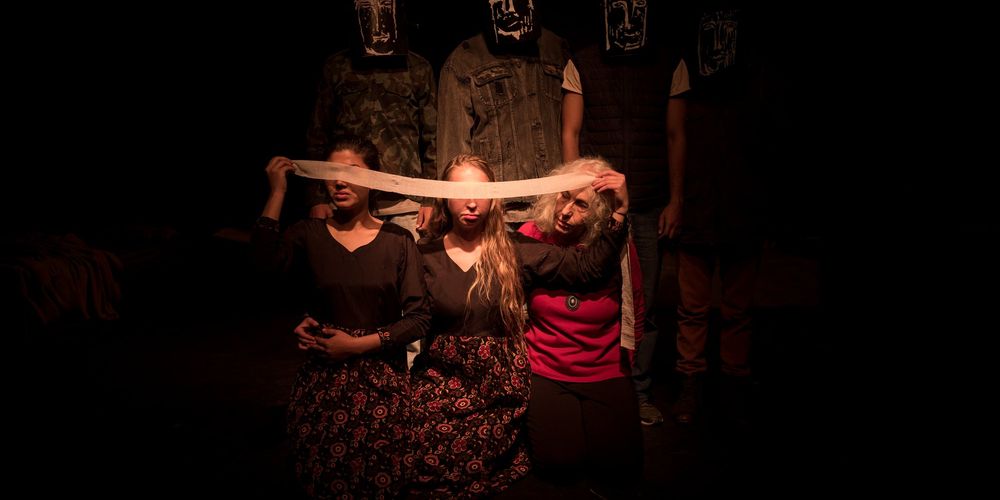 Alicia Partnoy was arbitrarily detained and tortured by the Argentinian military in 1977. She could have been among the ranks of the permanently ‘disappeared,’ her fate forever unknown. Yet she stands today on the stage of Kausi Theatre in Teku and declares with fierce defiance that “I, Alicia Partnoy, am still alive.”

She is appearing in a One World Theatre production based on her 1986 memoir The Little School, adapted and directed by Deborah Merola. For much of the play, she sits at a desk, stage left, playing herself as the memoirist who narrates the action that unfolds. Her presence is the production’s master-stroke, but it also tantalizes us with what this play does not show, of her life after her release. Instead, this is a play about Alicia’s memories of the concentration camp where she was imprisoned. It is a play about the proximity of life to death.

The young activist Alicia, incarcerated and blindfolded, is played by an American actress, Jenae Lien, while Alicia Partnoy’s daughter Eva plays a third Alicia, who is present within the scenes of imprisonment and yet free to roam. This character is perhaps intended as a personification of the idea that our minds cannot be imprisoned, or that the past and present intermingle in memory. However, this tripartition of function is not rigidly maintained, and all three performers share the burden of narration.

Are we witnessing a process of healing or justice in action? Are we participating? Does our knowing about the Little School and the detainees’ defiant humanity deepen Alicia’s triumph against her captors?

The play divides into twenty non-chronological scenes, each presenting a particular vignette or meditation. In one scene, the imprisoned Alicia experiments with telepathy. In another, we learn how her imprisonment reconciled her to her nose. There is a large supporting cast playing guards and detainees, but Alicia and her daughter are inevitably the focus of audience attention and reflection. Are we witnessing a process of healing or justice in action? Are we participating? Does our knowing about the Little School and the detainees’ defiant humanity deepen Alicia’s triumph against her captors?

It’s an interesting play that does several things well. It is in and of itself an extraordinary event: an international premiere of a new play based on a seminal memoir, with the memoirist herself on stage. It is also an instantiation of the humanity of victims and the value of testimony. It has an obvious relevance for Nepal. It shows us the Kafkaesque disorientation of arbitrary imprisonment, and it indicts the guards. Alicia is afforded the opportunity of challenging one of them in person. Rising to her feet she says with a scathing incisiveness, “Deep down he must have a memory of justice.” Merola’s adaptation contains some effective conceits, like the Figure of Death who moves among the prisoners, played with poise and precision of movement by Rose Bettina Schweitz.

It is also flawed. With a running time of nearly three hours, the play is too long. A friend charitably interpreted this as deliberate: in detaining us for longer than advertised, the director gives us a salutary taste of endurance. But it is more likely a consequence of the director’s reluctance to be selective among the memoir’s anecdotes and insights. This may well stem from respect for Alicia’s work, but she is in dereliction of duty as an adapter. The result is too many scenes, which vary in quality and become repetitive.

The second failure of adaptation is that the play is too wordy. It does not matter that the words are well-chosen and haunting. There are too many of them. This is an especially odd choice for a production in a city where English-language theatre already struggles to draw audiences. Worse, it’s unnecessary. The visceral experience of arbitrary incarceration does not need much narration, and theatre has techniques that a memoir or novel does not. Worst of all, it’s counter-productive. Words that would be moving on the page suffocate the play, doing a disservice to both the cast and the audience. Line after line informs us of what a skillful cast could convey through action and expression, withholding from us in turn the satisfaction of unmediated observation and interpretation. While showering, the young Alicia tells us that “water makes me come back to life.” After she is tortured, we’re told that “she dressed very fast as if she’d suddenly become aware of her nakedness.” These are not isolated examples but representative of what the script does.

Again and again, we are over explained to. During a downpour the young Alicia seizes an opportunity to hold an ecstatic whispered conversation with her friend, while telling the audience, “the sound of water helps to conceal our voices.” Indeed. In an earlier scene, we learn how Alicia’s over large nose proves to be a surprising boon under a blindfold. Initially this is fascinating. But for what seems like several minutes after we have fully understood the reason why, the three Alicias are required by the script to keep on explaining it.

The detainees regularly engage in a relay narration of their activities. The question this prompts is: why dramatize the detention scenes at all, only to narrate every breath? Lost to this approach is also our being able to gain a clear understanding of the condition of incarceration. For instance: how much can the detainees communicate with one another? How is it that they coordinate an intervention to save one of their number from further torture? It’s unclear.

Alicia’s thoughts are often put into the mouths of the other detainees, which is a curious statement of solipsism. It’s difficult to see how this could align with the real Alicia’s intentions in publishing her book. As well as surviving to tell her own story to the world, she also bore witness to the suffering and tenacity of Vasca, Maria Elena, Hugo, Patichoti, and others, all of whom are individuals in their own right and surely ought to be imagined or remembered as such. Yet in this play Alicia’s personality and perspective subsume theirs such that they even speak her words.

Alicia Partnoy herself is a compelling stage presence. She speaks with clarity and conviction, her voice only occasionally wavering. As the young Alicia, Jenae Lien gives an overwrought performance that lacks emotional content. The mis-calibration is most jarring and costly in the scenes that ought to be most agonizing, such as when Alicia realizes that she cannot recall her daughter’s face. Completing the triad is Eva Victoria Leiva Partnoy who gives an introspective performance that, though underpowered, rewards close attention with moments of moving beauty.

Among a predominantly Nepali supporting cast, the stand-out performers include Loonibha Tuladhar, who demonstrates mastery of pace and modulation in one of two major monologues; Bijay Tamrakar, who conveys both menace and ambivalence as one of the guards; and Saroj Aryal, nicely consistent in his chosen idiosyncrasies of character. The second major monologue is delivered by Rajkumar Pudasaini. Regular theatre-goers know him to be a committed actor who deploys his body interestingly, but the text is chewed up in his delivery here. Sandeep Shrestha steals his scene out from under him with an impassioned coda that echoes much longer in the mind.

That some of the other actors fail to leave a mark is partly because the script does not leave them much room for performance. Even the strongest among the cast can also struggle with the rhythms of English, defaulting to a delivery style that stresses every word equally. There are some indications too of a lack of precision to the direction, such as in the cast’s collective inconsistency in how they imagine and convey the specifications of the Little School. The iron gate that leads to the detainees’ cells shifts its location with every actor.

This is a hugely interesting project that is worth sitting through and engaging with. It is of unquestionable value, not least to the extent that it may be cathartic for the Partnoys and facilitate a process of listening across continents. Perhaps it may even inspire new writing in Nepal. In this early iteration, however, The Little School is a deeply imperfect play.

Rachel Moles  Rachel is working as a script reader while learning to write, translate and act. She’s based in Kathmandu.