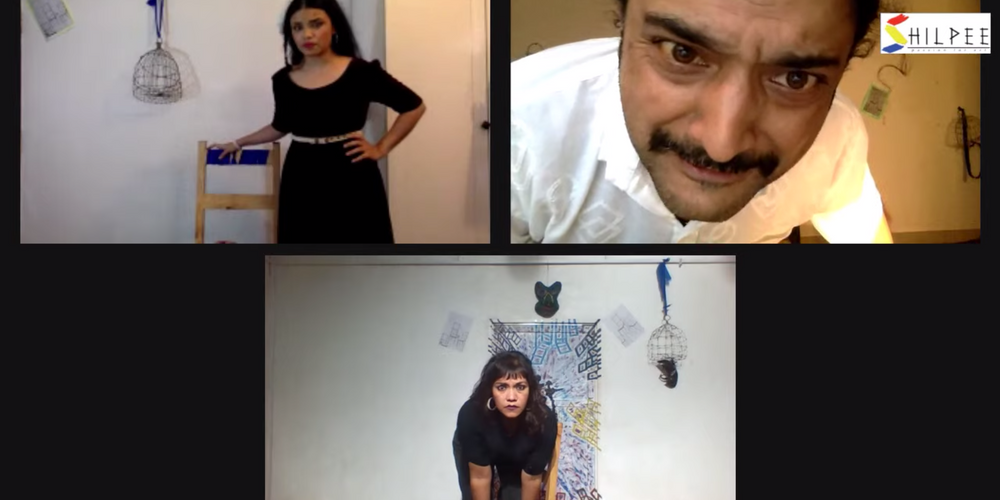 Even as I readied myself to watch Nepal’s first virtual theater performance, I was apprehensive about the whole configuration. The idea of orchestrating a play in real time over the internet gave me the jitters. I had a bunch of skeptical questions that any theater practitioner would have had: how is this even possible? How will they manage the lag if there's a bandwidth issue? Will they be able to deliver emotions via a screen?  What will happen if the internet goes down? Will they pause everything, as they do in the proscenium? Furthermore, this was not a virtual broadcast of a staged play; it was a remotely executed play, in which all the thespians were located remotely and would perform simultaneously. For anyone who frequents the black box, the technicalities behind this setup would feel strange and daunting. And the risk, too high.

However, regardless of any potential hiccups, Shilpee Theatre took up the difficult task of performing a Nepali rendition of Jean-Paul Sartre's No Exit. The play, translated into Nepali by Awatar Pathak and directed by Ghimire Yubaraj, was screened live through Shilpee’s Facebook page and YouTube channel on June 2. Approximately 300 viewers watched the performance live.

No Exit, or Anupasthit Teen in Nepali, begins in an unusual style. Two split screens depict adjacent sides of a single stage. Aajad (Salil Subedi Kanika ), one of the protagonists, is ushered into the cell through a backdoor, escorted by a guard. The cell, however, is not a normal one. It is a place where the dead are kept while their sins are being assessed. The interior is peculiar. It is not drab, ghastly, or infernal. Rather, it is a clean, white space with minimal objects — three chairs, a paper scale, a few masks, and sketches hanging on the wall.

Aajad is shortly joined by Abhilasha (Pabitra Khadka) and Ichcha (Usha Rajak). Like Aajad, these two fresh recruits from Earth wonder about the place and worry about the punishment awaiting them. But the air in the cell remains calm. There’s no pot of boiling oil or sharp spears to inflict torture. This puzzles them, but at the same time, it gives them enough time to settle and open up to each other.

The play gains momentum once these strangers begin to engage with each other. The tales they tell are priggish, yet they reveal a lot. Ajaad, a revolutionary poet, is pompous about the poetic contributions he made while he was alive. Likewise, Abhilasha, a hotel receptionist, brandishes the selfless love and sacrifices she made for her unrequited love. And Ichchha gloats about her beauty and her elitist life on Earth. But one can easily sense dark secrets within them. At moments, they appear to be on the verge of spilling their sins, but they refrain. These multiple stop-go plots in the play propel the story forward. And as the story unfolds, the conversations between the characters turn grave. Vile attacks take over sarcastic jabs. Attraction and affection are replaced by apathy and resentment. They hurl accusations and insults at each other. In doing so, their insecurities, lies, and pretense are all exposed. The ambiance becomes chaotic.

In all this cacophony, a fine thread connects them all. Their singular struggle to come to terms with their absence from Earth haunts them. They miss their mortal being, their surroundings, and the people attached to them. They can no longer decide and control things on Earth. They are left with no choice but to see life move on without them, perhaps the most painful part of being dead. In the end, the play comes full circle. The absence of infernal elements in the cell makes perfect sense; it alludes to a notion that hell doesn’t lie in the diabolical imagination, but within and around us instead. It is deeply embedded in our hypocrisies, toxic demeanors, and the pain we inflict on others. That was the ultimate punishment reserved for the three captives.

Running just over 90 minutes, Anupasthit Teen succeeds in converging three story arcs into one, mostly through a presentation laden with text. Ghimire, as the director, must have abridged and readjusted many chunks to fit it into the virtual format. With so little in his control, Ghimire, however,  does an appreciable job in choreographing his actors — limiting their blocking and stage movement to a bare minimum. The lightweight stagecraft does another trick: it appears frugal and consistent and helps everything remain static and uncluttered. The costumes, too, help to mitigate any possible distractions. Against the backdrop of white walls, characters clad in black are prominent throughout the play. It also remains a trope — black symbolizing death.

Ghimire’s breaking of the fourth wall also serves as another allegory. When characters get up close and look directly into their camera lenses, and through it stare at their audiences, they are witnessing life back on Earth. This nuanced tactic counters the monotony of a static presentation. Conversely, the alignment of the split screens does create a directional glitch when characters talk to each other, something that the audience needs to compromise on throughout the play.

Surprisingly, the actors live up to the mark. Barring a few technical niggles, their delivery and timing are spot on. Salil Subedi as Aajad, Pabitra Khadka as Abhilasha, and Usha Rajak as Ichcha all do a commendable job performing in front of a screen. To synchronize their respective solo performances with the entire narrative, that too over a virtual network, was a Herculean task, but they do it with so much ease and grace. The histrionics they exhibit emphasize their character’s mental, physical, and emotional being.

The emotional proposition of the play, however, surrenders to the medium. No emotions can reach you through mediocre sound and display quality. The network delays jar the sentiments, especially in scenes filled with emotional crescendos. A blend of enigmatic and eerie ambient music tries to amplify the emotions but it, too, suffers from the virtual conduct. The background score often eats into the dialogue, straining the audience’s ears. Amidst all this, the technical coordinator, Dev Neupane, deserves a shout-out. He handled the technical infrastructure with promptness during the transitions and network glitches.

Anupasthit Teen is a theatrical experiment with form itself. The challenges that it faces are paramount. It demands a lot from both the audience and the performers. Besides, it also opens up an altogether different discussion: is virtual theater a form of theater at all? It might be too early to put a finger on this but as crisis and uncertainty perpetuate, theater practitioners are in a pursuit to figure out alternatives. Perhaps Anupasthit Teen will just be the beginning.

Deepesh Paudel  is a theater practitioner currently based in Nepal.