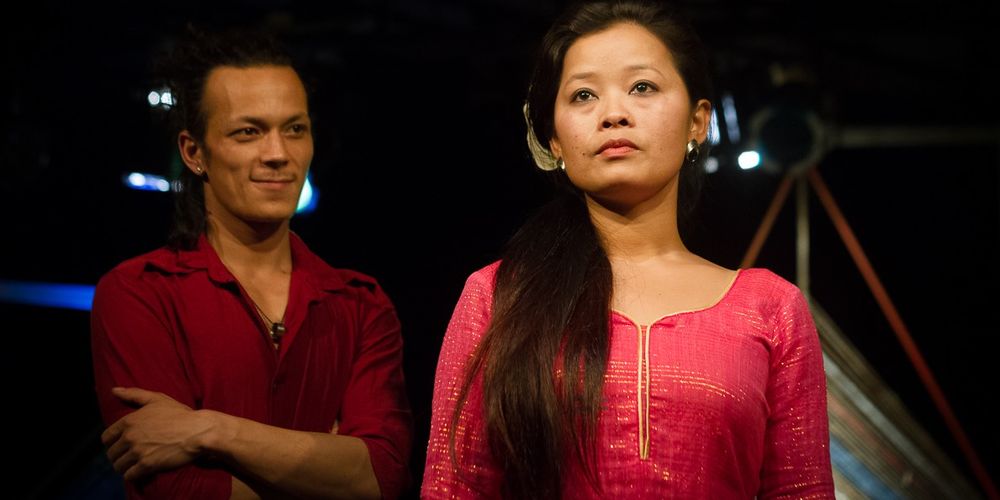 In the years since the political convulsions of the mid-2000s, women’s questions have emerged as a prominent site of political activism in republican Nepal. What began with a call for greater inclusion and representation of women in all structures of power, has at present been unceremoniously stalled by the discriminatory provisions in the country’s new Constitution that – among other things – curtails women’s ability to pass citizenship to their children. Naturally, such politics have in part shaped the artistic agenda too, as is evident in Kathmandu’s theatre scene. Every other month there is at least one production that in some way carries the impress of Nepali feminist movements, trying to address its different strands, even as it might do so awkwardly. The most recent and powerful example of that is Yuma (written by Yug Pathak; conceptualized and directed by Srijana Subba at Mandala Theatre), which, more than any other recent play, has managed to follow through the logic of its political imaginations.

Writer Pathak announced his political-literary intentions with Urgenko Ghoda (2008), his widely acclaimed debut novel. Set during the decade-long civil war, the novel came out when the reverberations of the war could still be felt. Urgenko Ghoda was an exercise in giving the people and places of the rebelling side and a long-marginalized indigenous group their literary due. It marked a compensatory aesthetics of sorts, where through its protagonist – a woman from the Tamang community who is also a Maoist combatant – the novel put on the Nepali cultural map people who had rarely been the objects of serious literary attention. While that representation was a necessary counterpoint in a scene dominated by male Bahuns, Chettris and high-caste Newars (one critic commended Pathak for his “revolutionary aesthetics”), the novel still seemed limited in its creative scope, perhaps by the need to address the tragedies of the past and revolutionary energies of the present. With Yuma, however, Pathak appears less shackled. As a result, the feminist logic that underpins the politics of this play finds a release that in my mind is far more radical than the “revolutionary aesthetics” of his earlier work.

The play is written around Yuma (also played by the director Subba), its eponymous character, and the possibilities of her – as well as other women characters’ – liberation. In keeping with Pathak’s interest in the histories of indigenous communities, the name ‘Yuma’ derives from a powerful female deity of the Kirat scripture Mundhum. However, this fact is limited to symbolism, as the play is distinctly a story of the modern Nepali life. Yuma and a few other women run Ladies Corner, a kind of women’s club, although it would be more accurate to think of it as a female parallel of the chiya pasal, those ubiquitous tea stalls which are largely the preserve of men. Here the women come to meet friends, read books, or spend part of what remains after spending their day’s necessary labor hours. This setting creates two distinct effects. First, it is a clear departure from the present state of the observed ‘normal’, where loitering in public space by men goes unnoticed, but the same by women becomes conspicuous to the point of it being recipient of abuse and violence. Second, the loitering in the Ladies Corner alerts one to the skewed nature of our division of labor, where men often get to spend their leisure hours relaxing in public spaces while women remain burdened with domestic duties. The distribution of these duties plays a decisive role in women’s true liberation from the many layers of economic, political and sexual control. It is the quality if that liberation that is consistently the locus of the play.

Yuma’s dramatic tension comes in the form of the protagonist’s relationship with people around her. Physically separated by great distance from a husband who is a migrant worker overseas, Yuma is also beginning to rethink what appears to be an increasingly tense and abusive relationship. A husband who was, we are told, once a tolerant, free-thinking presence, now not only disapproves of her decision to run the Ladies Corner, but seems aggressively opposed to any act of her volition. For Yuma, these are nothing but efforts to regulate her free will and her desires from a distance. In this context comes Rangeen Rag, an archetypal seducer who becomes one of the new male regulars of Lady’s Corner and takes a fancy to Yuma. Rangeen (played by Ankit Khadka) is an interesting inversion of the ‘manic pixie dream girl’ character one sees so frequently in works of dramatic fiction: the stock female character whose primary role is to push the character arc of, and provide an object lesson to, the male protagonist. In this play, he marks Yuma’s reassertion of her own desires, her freedom from the constraints of patriarchy; in time their relationship takes a romantic form.

Yuma’s psychological conflicts find ample play in the physical arena of the Lady’s Corner. They make up some of the most substantive and well-directed scenes of the play where Yuma is in dialogue with another regular of the Corner, Manji, a communist party activist. Manji speaks enthusiastically of her newfound lease on life after divorce, and is suspicious of the stifling dangers of romantic attachments. But for Yuma, the choice is not that easy yet, and Srijana Subba performs the ensuing dilemma with remarkable deftness. From her loveless marriage to her husband, Yuma knows of the oppressive nature of the institution. But she also realizes that it was her relationship with Rangeen – a romantic affair after all – that played some part in her coming to that conclusion. In that sense, Yuma’s arguments with Manji are also her arguments with herself, representing her gradual recognition of and claim to complete autonomy.

Yuma answers this question of choice by making a radical break from our commonly held notions of companionship. In a decisive show of remorseless optimist, she gives her newly returned husband the papers for divorce. And when Rangeen comes with the proposal of marriage, she refuses him too, although not without acknowledging the value of his companionship. These decisions are more than just expressions of fleeting attachments, but a declaration that she is not defined by these relationships alone. That true liberation is precisely the freedom to engage or disengage from traditional, or for that matter modern, social formations.

Ever since the evolution of the institution of marriage, it has functioned as the building block of both economic and social life in almost all societies in the world. Family is where labor is reproduced, literally, through childbirth and child rearing. On the other hand, familial bonds are presented as the fount of moral and emotional energy, where we find community and safety. But that ideal of the heterosexual monogamy – and its natural corollary, family – might not be a “haven in a heartless world,” as one historian grandly put it. Instead, one is confronted with the possibility that it is just a more humane site of exploitation, where the extractions that occurs in the market or the town hall are merely domesticated.

Now if the question is where do we go from here, the only reasonable option seems that of greater openness. As the writer Mark Greif argued in his wide-ranging essay ‘On Repressive Sentimentalism’, “modernity has given us a chance at something much better—affiliation by manifold currents of love, interest, and likeness which overﬂow the monogamous male-female dyad.” And, at any rate, the old functions of the family are more than ever undermined or outsourced. “We now resist atomization and anomie” – once argued to be countered by closed couples and family – “with the wide range of unusually warm, non-exclusive and simultaneous friendships, often verging on erotism but not compelled to it, both across and within the sexes, and among straights and gays,” Greif says.

Curiously, Yuma’s writer Pathak doesn’t think this is a feminist drama, but a play about women’s liberation. Usually, one needn’t be too pedantic on such distinctions, but in this case there is an interesting implication. In fact, the play channels a similar distinction with Manji’s character, who identifies herself not as a feminist but a socialist, and denunciates the varieties of liberal, developmental and pop feminism. In a time where many get their political education from ironic world of memes and GIFs, the irritation with such brand of consumerist feminism is understandable. But that should give even more reason to reclaim the word and its radical roots.

One way to argue for such a socialist reclamation of feminism is by contrasting Yuma with a production of The Vagina Monologues at Shilpee Theatre from early March this year to mark the the International Women’s Day. Eve Ensler’s modern classic of liberal feminism, which is now a global franchise, is an unabashed celebration of women’s sexuality. And much is to be gained by dismantling a system that depends on controlling the desires of one half of the population. But the extent of the play’s liberating qualities are not very clear, especially with its essentialization of the female psyche, the occasional lapse into new-age spiritualism, and the embarrassing infantalization of some characters (the infamous case of the vagina that smells of ‘snowflakes’ comes to mind). Also, the production was only accessible to speakers of the English language, which greatly limited its potential audience. In the end, it seemed like yet another work that begins and ends with the educated middle class’s celebration of their self-styled liberalism, an admirable but limited enterprise.

(Without any loss of irony, it must also be mentioned that the production at Shilpee was organized by Hamri Bahini, a ‘social enterprise’ that “has taken a business approach to solving the problem of mass migration/trafficking/exploitation of young and vulnerable girls out of Nepal.” One such approach involves ‘Find A Maid’ – an online service that offers a “pool of more than 1000 registered didis [colloquialism for women domestic helps]” to those who can afford to hire one. The organization’s website clinically adds: “Replacement facility for up to 3 months.”

Certain literary works are important not because they carry in them some higher, revolutionary impulse, but because they seek to marry those impulses with the brutal facts of life. This is what Yuma does: first, by representing those millions of Nepali women and men who find themselves in similar predicaments as Yuma and those around her do; then, by offering a far-reaching, even scandalous, solution. And the solution is as risky as it is shocking. The shahi baaz (royal eagle) – a mythical element in the play that Yuma is drawn towards – is a recurring motif of possible independence; but it makes no claims about happiness. It is false economy to mistake the promise of liberation with the promise of happiness or comfort, or even love, as is tirelessly reimagined in our books and in our screens. Literature, like life, often proceeds from from one necessary scandal to another. It will be a shame if this scandalous nature of Yuma goes unnoticed.

Shubhanga Pandey  Shubhanga Pandey is a Kathmandu-based journalist who writes on politics and culture. His work has appeared in Himal Southasian, Jacobin, The Caravan, among others. He tweets at @shubhangap.