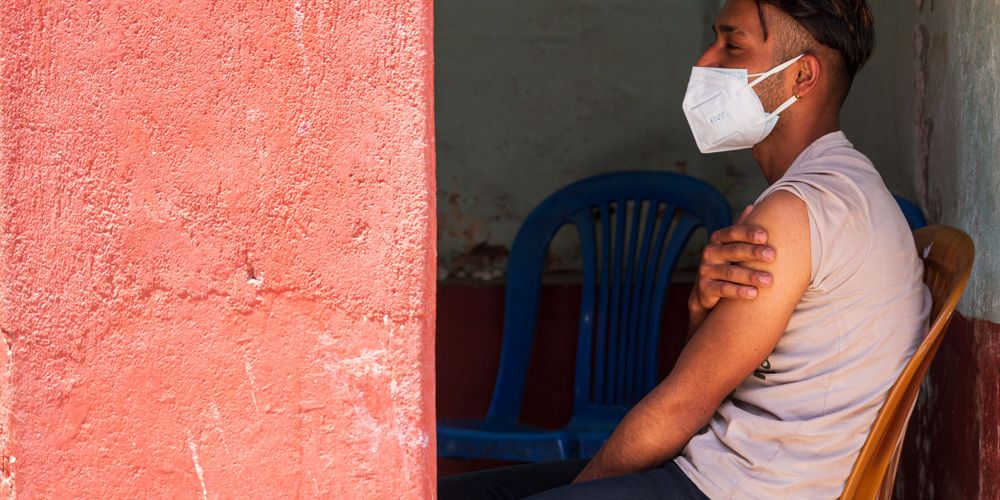 Dawa had already reached the vaccination center in Mahankal, Boudha at 4 am. It was July 19, the first day of the Johnson & Johnson vaccination drive that had started in the Kathmandu Valley, and he had gotten up exceptionally early so as to not miss his chance at finally getting inoculated.

But after waiting for almost four hours, at around 8am, there was an air of confusion. Health officials started saying that they had not received any order from the government to administer the vaccine to refugees. They also said everyone was mandated to fill up an online vaccine form. They turned away Dawa, and many other Tibetan refugees like him.

But a day earlier, the Health Ministry had issued a notice clearly stating those within the age group of 50-54, people with disabilities, refugees, and front line workers who had missed getting the jabs would be eligible to get the Johnson & Johnson vaccine.

“I had filled up the online registration form as well, the one that the ministry asked everyone to fill many months ago, but officials said they were talking about some other form. The officials then told us to go to the IOM [International Organization for Migration] in Baluwatar. With no other choice, we immediately went there,” said Tenzin, 49, who is choosing to go with his first name only. “Even there, we waited for hours in the parking lot. They gave us tokens and told us they could vaccinate around 120 people. Then, at around 11am, they said they had run out of vaccines. It was very frustrating.”

Dejected, he had just returned home to Boudha when he found out through friends that a vaccination center in Jorpati vaccinating refugees. There, he, his wife, and daughter, were finally able to get their jabs. “I was very worried that my family would not get vaccinated, considering my refugee status,” said Dawa. “I am just glad that we finally got our vaccines.”

Dawa’s case is one example of how in the midst of bureaucratic chaos, lack of adequate information and plain mismanagement, many are having a difficult time accessing vaccines. After the botched first and second vaccination drives in January and March, the government had eased the process in the third round by involving local governments and allowing them to coordinate the drive. This time around, only a handful of vaccination centers have been authorized, and often, there is conflicting information about who is eligible when the vaccines will be given, and how many doses will be given out in a day.

To add to the confusion, the vaccination campaign was abruptly halted on July 21, Wednesday, citing vaccine shortage.

“People were coming in on Thursday morning looking to get vaccinated but we did not receive any vaccines. The ministry says they have run out,” said Ram Bikram Adhikari, spokesperson for Bir Hospital. “We only received around 5oo doses for three days. Where did the rest of the 1.5 million doses go?”

“The ministry has said they have run out of doses. Talks were ongoing about inoculating other age groups with the Johnson & Johnson vaccine but we had to cut short our vaccination drive,” said Gyan Bahadur Oli, a member of the vaccine administration committee of the Kathmandu District Health Office. “As far as I know, only Nepal Police Hospital is administering vaccines right now.”

The Health Ministry says it has handed over all the doses it had to local authorities.

“We do not have any vaccines at the central and provincial storage. There may be shortages in certain areas due to population density,” said Samir Kumar Adhikari, joint spokesperson at the ministry.

Such mismanagement is leaving Nepalis frustrated.

“The information the government puts up on their websites and social media handles is not enough to keep the people informed,” said 33-year-old Sagar Chitrakar, who has not managed to get vaccinated despite trying many times these past few months.

Chitrakar went to get vaccinated the first time the vaccination drive started, back in March when the second wave was just starting. But the crowds, which were a much-maligned feature of the first drive, scared him and then the drive too ended in a few days.

“Last week, I went to get the J&J jab at a few hospitals but the lines were intense and I returned. I then heard rumours that the military hospital in Chhauni was giving out doses. But there too, I couldn’t get a jab.”

When Kathmandu restarted its Verocell vaccination drive from July 14-22, Rajan Shrestha too went to get his first jab at the Nepal Police Hospital in Maharajgunj -- twice.

“The first time, I stayed in line for not more than 20 minutes because it was late afternoon and they announced that the vaccines for the day were finished,” said 39-year-old Shrestha, who lives in Swayambhu. “The next day I went early in the morning and stood in line for more than three hours. Then they announced that they ran out of vaccines again.”

That five-day campaign too was cut down to just three days because of a shortage of vaccines.

“Now, I am just waiting for more vaccines to arrive,” said Shrestha.

On that front, there is good news. On Saturday, The Kathmandu Post reported that Nepal is closing in on a deal to purchase an additional 6 million doses from China’s Sinopharm. Besides vaccines coming from China, Japan has declared it will provide 1.6 million doses of AstraZeneca vaccine through COVAX facility and these too are expected to arrive soon. According to the same report, Nepal will also be receiving over 3 million shots from Beijing over the next few days.

As cases in Nepal still hover in the thousands, and with a third wave looming, it is imperative that as many people as possible get inoculated in socially distanced well-managed drives. Saturday reported 2,309 new coronavirus cases in the last 24 hours, taking the nationwide infection tally to 679,017.

While the number of vaccines coming is welcome news, if the vaccination drives are not carried out carefully in a systematic manner, then they could become spreader events in themselves.

“Right now, there’s a lot of mismanagement. I feel like there are more chances of catching the virus at the vaccination centers than by not taking the jab,” said Chitrakar.