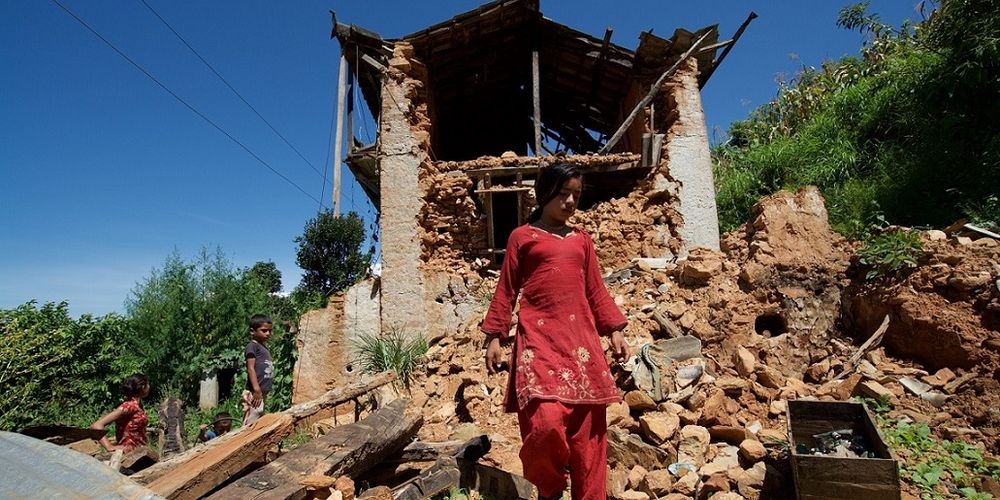 International aid agencies are paying the Government of Nepal hundreds of thousands of dollars in fees, and stipends to bureaucrats, to get their projects approved and monitored. They accuse the government of hampering their work, citing year-long delays and repeated demands for bribes before aid projects are green-lighted.

This comes as the country is still struggling to recover from the 2015 earthquake, which killed almost 9,000 people. Two years after the disaster, tens of thousands of earthquake victims are still living in temporary shelters and only a small minority have received more than the first tranche of $475 in reconstruction grants from the government.

Fees, required to secure project approval and cover monitoring and evaluation, range from $6,000 to $15,000 per project – the equivalent of 6% of the total budget of some development projects.

“Governments all over the world charge service fees but it’s very clear and everyone is charged the same amount. Here it’s a bit more opaque,” said one INGO director, speaking on condition of anonymity. “When you have an environment that is opaque, it’s a lot easier for people who want to abuse that system to do so.”

Aid organizations in Nepal must convene multiple meetings with central and district level bureaucrats and up to 11 government ministries to get their aid projects approved. According to a government directive, these meetings should take place out of office hours, which allows government employees to demand stipends to attend.

Government bureaucrats can earn $2500 a year just for attending the meetings, INGOs say.

The director of one organization said some agencies are pressured to host the meetings in upmarket hotels, with dinner and drinks. “I feel so strongly that our resources have to get to people in need… and to see this money leaking out the edges is so unethical,” said the director.

Dilli Prasad Bhatta, the head of the Social Welfare Council (SWC), the government body that oversees the work of local and international NGOs, insisted aid groups are not required to pay. “It’s not necessary... [but] if someone offers you something, you can’t reject it,” he said.

However, INGOs say they have little choice but to pay up. “Not only do I have to pay each of them a stipend, but I also have to pay their drivers. One of them couldn’t attend the meeting so he asked me to bring him the meeting minutes to sign, along with the stipend,” said one INGO director. "If they turn around and refuse to come, you’re non-compliant, so what do you do?”

Aid workers also say they are repeatedly asked for bribes, and face demands for “donations” from political parties and pressure to partner with local NGOs favored by bureaucrats and politicians.

The director of one INGO said, “We had a politician call us and tell us we have to hire his organization. He threatened us.” Another said, “We were told we had to pay bribes and exactly how to pay those bribes.”

INGOs say the approvals system - which affects the whole development sector, not just earthquake reconstruction - has existed for decades, but became more difficult to negotiate following the earthquake, when almost a hundred new INGOs entered Nepal.

“There was a massive influx of money and boots on the ground, and when this happens [the question for bureaucrats] is not, ‘How do we direct this to the people who need it?’ It’s ‘How do we influence and control it?’” explained the director of one INGO.

Prabin Manandhar, the chairman of the Association of International NGOs, which represents 145 INGOs in Nepal, says the project approvals process is designed to both exercise control over civil society organizations and create opportunities for political patronage. “Nepal has had 22 governments in past 26 years... Creating many layers [of bureaucracy] gives space to all the different political parties and creates loopholes for the possible misuse of resources,” said Manandhar.

The bureaucratic culture, INGOs say, is to be deliberately obstructive. Project approval can take up to a year, and INGOs are not officially allowed to start work until their projects are approved.

“They are brilliant at keeping you in state of limbo and non-compliance, so at any moment they can turn around and say you’re not compliant," said one director. “They always have you by the neck, so that incentivizes you to give in more and more."

Bhatta, the head of the SWC, denied his organization was to blame for delays in project approvals. “We do the approval much faster than before but for a few organizations we may need some justification [for their projects],” he said.

However, a consultant for a donor agency said in some cases local bureaucrats are right to question INGOs’ activities. “Why do we get to complain about lengthy approval processes? They can’t just let us run amok,” said the consultant. “You’ll find the district government officials often have quite good instincts around fairness… The co-ordination of this is a nightmare for them.”

INGOs say the difficulty and cost of getting approvals is compounded by donor agencies who have unrealistic expectations or a very limited understanding of what goes into acquiring approvals.

“There’s pressure to launch projects very, very quickly,” explained the consultant. “Organizations that can guarantee that they will be able to get approvals are seen as more competent [by donors], so there’s then pressure just to sort it out any way you can.”

Caught between bureaucratic hurdles, critical local media and impatient donors, INGOs find themselves competing against each other.

“We’re all incentivized to stab each other in the back. There has to be a larger institutional response,” said one director. "There has to be donors saying, ‘if you don’t change this you’re going to lose money.’”

INGOs admit that is unlikely to happen. “Stopping your projects has an impact on a huge number of beneficiaries…We can’t just walk away,” said one country director.

Aid groups are calling for a more collaborative approach with the government. “My dream would be to work with the government for a development agenda,” said the same director. "Nepal is still a very poor country and it doesn’t need to be.”

“We should be working together with the SWC for the same objectvies,” said another, “but it’s a very controlling relationship.”

Kumar Khadka, the minister for women, children and social welfare, acknowledged there are problems with the SWC, but warned that some INGOs are also at fault. "I have found that what some INGOs are doing in the field is very different to what was in their [agreements]. That is worrisome,” said Khadka. "I want to make it easy for INGOs to work in Nepal, but they have to respect the law.”

Pete Pattisson  Pete Pattisson is a journalist specializing in documenting issues of social justice and human rights, in particular labor rights and modern forms of slavery. He contributes to The Guardian newspaper. In 2013 his reports on the treatment of Nepali migrant workers in Qatar, host of the 2022 World Cup, brought international attention to the issue. He has won a number of journalism awards, including the Amnesty Media Award, Anti-Slavery Media Award, and a Webby Award.