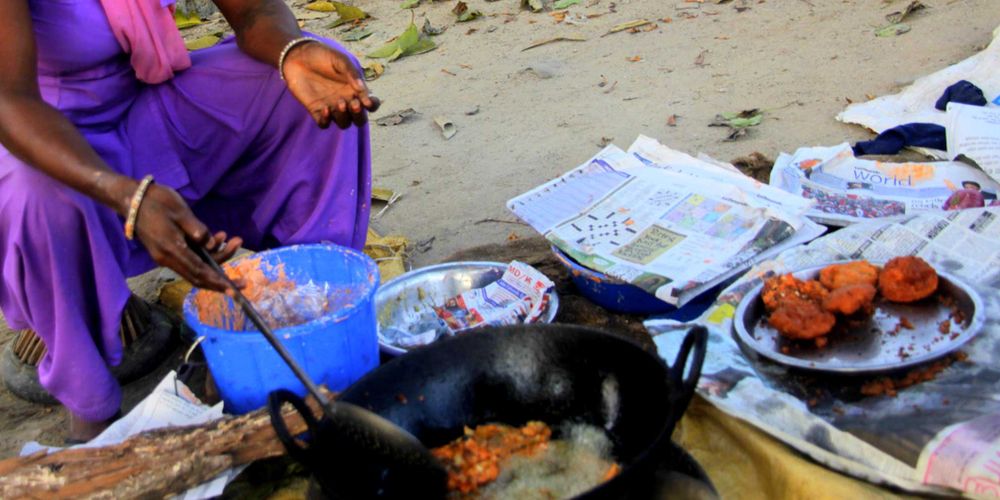 On a sunny day last spring, Rina Sah was sitting below a peepal tree moving a ladle over a pot of hot oil in the heart of Lalbazar market in Udaypur, selling alu chop to passers-by. Rina, 21, was the topic of discussion in Lalbazar. She had left her husband’s house more than three years ago, an act that elicited different reactions. In the long queue of people waiting for her alu chop, some praised her move, but most considered it shameful.

Rina was too busy to care about what others said. If she wasn’t cooking alu chop, she was gathering firewood from the nearby Belaka jungle.

“It’s good to be busy,” she said, “your head doesn’t get crowded with too many things.”

Rina was married off at 16 to a migrant worker who worked in a factory in Malaysia. She wanted to open a tailor shop but her husband did not support her. He told her that she might elope if he allowed her to work.

As a child bride, Rina was too young to understand what marriage meant for her.  Although the legal age of marriage for both men and women is 20 (18 with parents’ permission), Tribhuwan University's Nepal Social Inclusion survey (NSIS) shows that 50 percentage of girls are married off below 18, at an age when they are too young to understand its meaning.

Another constraint women in Nepal face with regards to marriage is in the very choice of who they marry. The freedom to choose one’s life partner varies widely by ethnicity. The Nepal Social Inclusion survey states that more than 75 percent of Hill Dalit and Janajati women were consulted about their marriage partner, while among the Hill Brahmin and Chhetris, the number was close to 70 percent. However, a different picture emerges for Madhesi women; among them, the statistics show that less than 35 percent are consulted. For the Madhesi caste group to which Rina belongs, the number is 21 percent.

The freedom enjoyed by women decreases dramatically after marriage. In the NSIS survey, only 64 percent of women surveyed said that they could go to the market without seeking their family’s consent, and only 47 percent said they could visit their parent’s house or relatives without seeking permission.

At her in-laws, Rina was forced to hide her face in front of her elders with ghunghat, a veil. She ate leftovers, and her in-laws did not allow her basic necessities like soap, so she had to use detergent to bathe. Her parents had given her husband a bed, chairs and NPR 25,000 in dowry. But her husband used to taunt her constantly because her family did not give him the bicycle he had demanded. Once, her father-in-law struck her with a stone during an argument. After her son was old enough to go to school, she decided to run away and live with her parents.

Her parents realized their mistake in marrying her early. They even offered to raise her child so that she could marry again. With her tea shop business, she earned NPR 500 per day, enough to send her son to an English medium school.

Her in-laws threatened to take her son away, even going as far as trying to kidnap him. Rina’s mother prevented them from doing so by hiding the child. Rina was eager to divorce her husband but was waiting to have a final talk upon his return. It had been more than 4 years since he had left.

On 13 March 2018,  Lalbazar was missing the alu chop girl. Rina’s neighbors talked about how Rina’s absence had drained the life out of Lalbazar.

With a weary expression, Rina’s mother Manju Sah said, “Ley ghyalo ( she has been taken) ... Ki karbai ladki jhyat  kataik din rakhbai gharma (How could I keep a daughter for her whole life in my house)”.

In early March, Rina’s husband had returned to Nepal. Seeing that Rina was not interested in coming back, he and his two relatives visited Lalbazar to get her.

After discussing with parents, relatives and neighbours they took her back forcibly.

Over the phone, Rina said, “My brother, who hadn’t even been supporting my parents, told me that I would shame the family by not returning to my husband. Even the neighbors pressured me to go back. I want to run away again.”

Rina is back to wearing ghunghat and spending all her time on housework. Her husband went back to Malaysia, while her son is in a hostel now. Rina wanted a divorce, but nobody supported her. According to Rina, her parents told her, “Just stay over there even if you have to die because society will shame us if you return again”. She feels tortured living with her in-laws. “My life is wasted, what can I do, whom would I share there is fault in my stars itself."

Even though Rina escaped an abusive home and became financially independent enough to support her child's education and make her own life decisions, the society she lived in forced her to go back. Such stories of women trapped in oppressive circumstances are not examples of individual failure, but of a systemic problem in Nepali society. Rina is but one among women who are headstrong and yet compelled into a life of subjugation by social and cultural obligations.

Poonam Rauniyar  Poonam Rauniyar is a graduate of English and Political Science. A story teller, actor and writer, she enjoys photography and poetry.