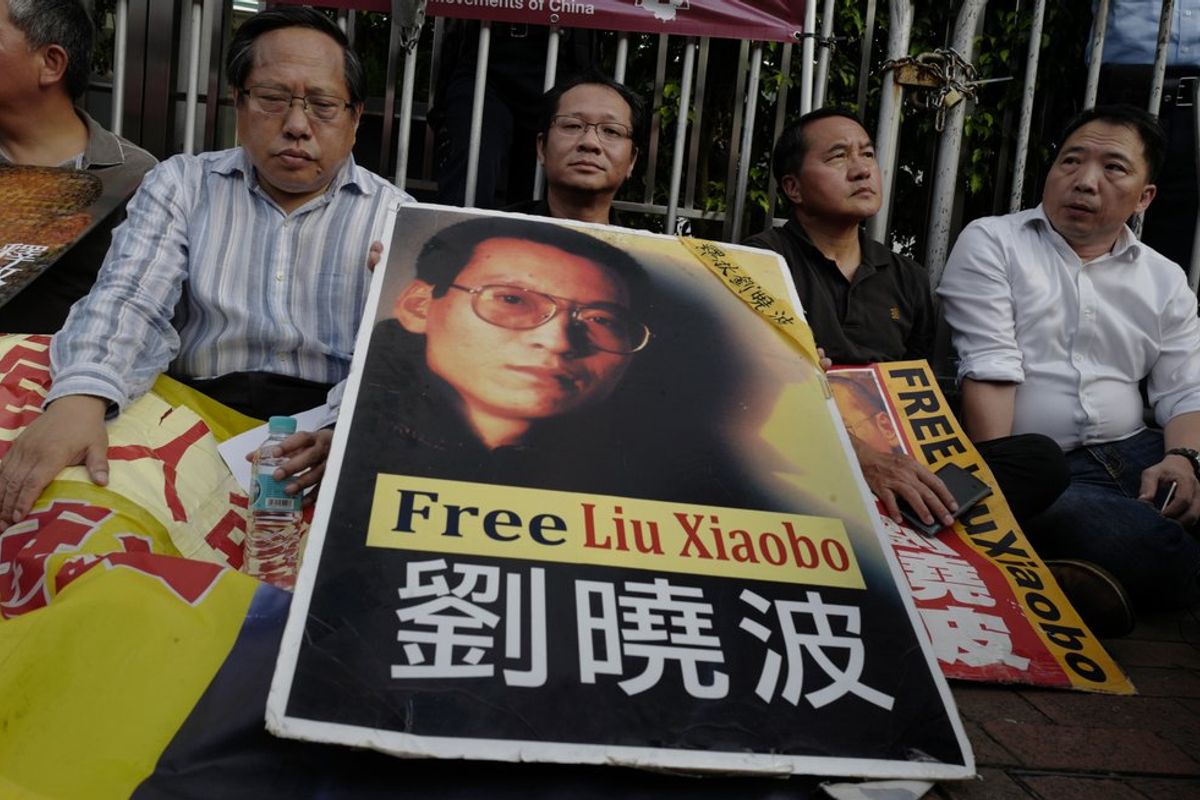 Chinese doctors worked urgently Monday to save critically ill Nobel Peace Prize laureate Liu Xiaobo, as the government hardened its position against growing pleas to allow China’s best-known political prisoner to leave for treatment overseas. A stark update issued by Liu’s hospital said he was suffering from poor kidney function and bleeding in the liver from metastasizing tumors. It heightened pressure on Beijing, which has resisted appeals from several nations to let Liu and his family go.

A foreign ministry spokesman, Geng Shuang, asked other countries at a daily news briefing “to respect China’s national sovereignty and refrain from interfering in its domestic affairs due to an individual case.” On Monday the office of German Chancellor Angela Merkel asked Beijing for a “signal of humanity for Liu Xiaobo and his family.” Liu’s health has been the subject of international attention after news emerged in late June that the dissident had been transferred to a Chinese hospital because of late-stage liver cancer.

Supporters and Western governments urged China to allow Liu to choose where he wanted to be treated and to release him. Beijing has so far resisted, citing Liu’s fragile health and arguing that he is receiving the best possible care in China. Liu was convicted in 2009 of inciting subversion for his role in the “Charter 08” movement calling for political reform. He was awarded the Nobel Peace Prize a year later while in prison. Two foreign doctors who were permitted to visit Liu this past weekend said Sunday that they deemed Liu strong enough to be evacuated, apparently contradicting Chinese expert opinion.

Chinese leaders face two unpalatable choices, analysts say. If China sends Liu abroad, he could speak out against Beijing in his remaining days and become a worldwide media icon. If Beijing maintains the status quo  keeping him under close guard in China  his death in custody would tarnish the Communist Party’s image and draw unwanted comparisons with Nazi Germany. Liu’s supporters have drawn parallels with the story of Carl von Ossietzky, an activist who received the 1935 Nobel Peace Prize while he was held in a German prison camp and ultimately died from tuberculosis under the watch of secret police. But even they say it is unlikely that China will let Liu go, which would seem like backtracking.

“If a Nobel Peace Prize laureate dies in detention, it would batter China’s image but only be a short-term political hit,” said Mo Zhixu, a dissident writer who is friends with Liu. “If he leaves and makes political statements, it would be a unifying force for the world and rejuvenate a political reform movement in China that’s reached a low maybe even start a new wave.” Liu’s plight has already drawn public protests in the southern Chinese city of Hong Kong. On Monday, dozens of people waved banners and chanted slogans as they staged a sit-in protest outside the Chinese government’s representative office, urging Beijing to allow Liu to be treated overseas.

Human rights lawyer Albert Ho called it a “marathon sit-in” aimed at sending a strong message to Beijing. The activists said they would not leave until Liu is allowed to leave the country. Mo said China has not let a political prisoner leave on medical grounds for more than a decade, when Tiananmen Square protest leader Wang Youcai left in 2004. Other prominent pro-democracy campaigners who left China on medical grounds, including Tiananmen student leader Wang Dan and veteran activist Wei Jingsheng, did so when China was still seeking membership in the World Trade Organization and made human rights concessions.

“The economy is strong, the military is rising does China still care about international political opinion?” said Zhang Lifan, a liberal political commentator in Beijing. “I’m pessimistic they’ll let Liu go, if only because of the Communist Party’s track record of making the wrong choice.” The Chinese facility treating Liu says it is providing him with the best possible care and that Liu is too ill to be moved. It issued an update Monday that appeared to highlight his deteriorating condition. The First Hospital of China Medical University said Liu is also suffering from low blood pressure and that an MRI scan revealed growing cancer lesions.

“The national experts group’s view is that the patient is in critical condition,” the statement said. Doctors treating Liu were in an “active rescue” mode, it added, saying they were trying to fight infections, correct Liu’s blood pressure and purify his blood. If China were to release him, Jared Genser, a lawyer representing Liu internationally, said he was ready to evacuate him. “The primary thing we need is approval of the Chinese government to let them go and the issuance of passports for them,” Genser told The Associated Press. “From learning of the approval for the Lius to travel, we could have the medevac there in 48 hours.”

A video clip leaked on Monday appeared to show one of the foreign experts who visited Liu, Markus W. Buechler of Heidelberg University, addressing Liu’s wife, Liu Xia, to tell her that Chinese doctors were doing their utmost to help Liu and were “very committed to his treatment.” The German Embassy in Beijing expressed “deep concern” that the recording was leaked to Chinese state media outlets against the wishes of the German side. “It seems that security organs are steering the process, not medical experts,” the embassy said.