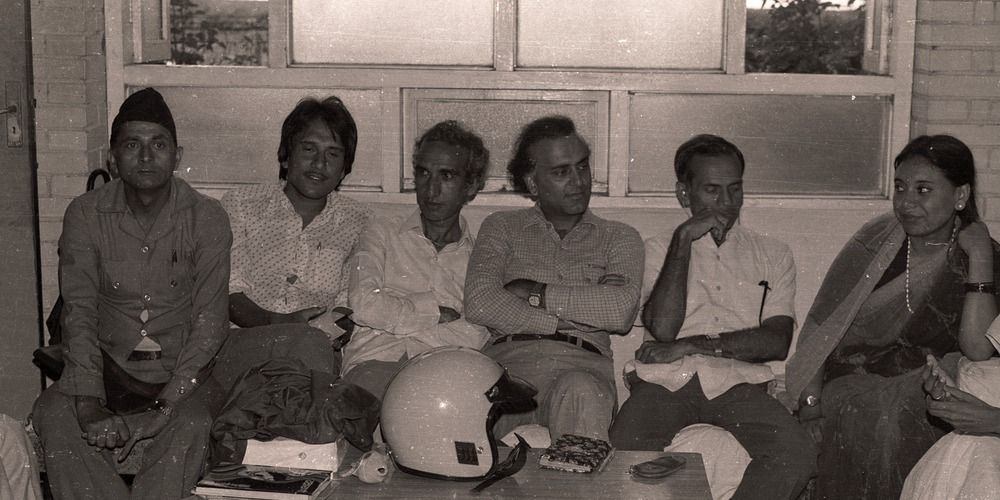 Nepal’s cultural life faces an embarrassing fact: there are far more writings about “public intellectuals” than there are actual writings showing the public intellectual at work. Almost every other week, there is a think piece telling us, for the umpteenth time, what sort of creatures public intellectuals are, how wonderful they used to be, and why in the present day they are, in so many words, either no longer around or a rotten lot. Sometimes, it is the contemporary “public intellectuals” themselves who author such derivative articles, making one wonder why they’ve not spent that labor in producing original works to justify their august title.

A recent Annapurna Post piece that ran under the byline of sociologist Chaitanya Mishra might supply a few answers. Mishra manages to talk about many disparate things within the span of the piece. And “talk” is the right word, since nearly every new article by him seems to be an edited transcript of an interviewer’s chat with him. The piece has caused some reaction in the public, largely around Mishra’s dismissal of Marxist politics. He argues Nepali leftists have not really understood Marxism—and that Lenin ruined everything. Making a case for “democratic socialism,” as opposed to “Marxist socialism,” Mishra says we should retain a capitalist economy, since it allows us to take all the benefits of free market, its “golden eggs,” before its eventual end.

A full critique of his line of reasoning is beyond the scope of this article. But for our purposes, it’s enough to show that this guff-gaff model of public discourse doesn’t encourage nuance and clarity. For instance, what sort of capitalist growth is Mishra advocating for his democratic socialist dream? The Western experience in the last four decades has been one of rise of predatory finance and gutting of welfare schemes, the precise opposite of what he says we need. The experience of countries in the global south with high GDP growth, India for instance, is that of diminishing growth of jobs. The dominant mode has been a class warfare led by the rich and globally-mobile: private corporations colluding with governments to drive down wages, criminalize worker protests, and drive out people living in mineral-rich environments.

But in this chiya-pasal model of intellectual life, empirical details are replaced by buzzwords and platitudes. Trends, such as the systematic tax strike by multinational firms, are ignored, so as to rescue a romantic notion of liberal capitalism, where the rich are easily taxed for the uplift of the poor. Paraphrasing past thinkers out of context and dismissing real-world implications of political economy become not a bug but a feature of such writings.

It would be unfair to lay the blame of  intellectual laziness on scholars like Mishra alone. Much of it has to do with the way our media functions. The quality of their work depends as much on their efforts as it does on the platform they are entertained in. Articles about “public intellectuals” have been something of a cottage industry, a form which can be easily produced and replicated. All you need is a working audio recorder and a known name, who can be trusted to dole out some guff. And the go-to list isn’t too long: Chaitanya Mishra, Pitambar Sharma, Nilambar Acharya, C.K. Lal, Krishna Hathechhu, Khagendra Sangroula, Hari Sharma, Lok Raj Baral, Krishna Khanal, plus a few more, most of them comfortably located within Kathmandu. Research and close editing become expendable. The usual pains of intellectual activity—hitting the books, writing fresh sentences, rewriting them, finishing a draft, entertaining the back and forth between a writer and an editor—the stuff of intellectual life itself, disappears. Instead, we get quickly churned out interviews posing as essays penned by an eminent name, usually bearing their oversized photographs.

This formula to rapidly produce “intellectual” content gives rise to a particular kind of middlebrow cultural journalism. Middlebrow works make a show of high intellectual seriousness, but are in fact quite conventional products made for the market. Often, what they are doing is not the dissemination of complex ideas to the public, as public intellectuals are supposed to, but their oversimplification, or vulgarization. Ideas lose their civic power and merely become a cultural currency of sorts, a list of names and opinions you should remember if you wish to appear well read.

Traditional mass media has little incentive to change this state of affairs. Even emerging online portals seem to be aping the same model of the guff-gaff public-intellectual writing. In addition, there are almost no cultural organs where a public intellectual can flourish. We have no parallels of the London Review of Books, n+1, Dissent, New Left Review, The New Criterion, Economic and Political Weekly, or even The Nation, Commentary, or The Caravan. Our biggest magazines and newspaper rarely feature works of criticism or review-essays, even when the internet has solved old problems of space. When they do, the writings trod the beaten paths; just recall the clichéd essay one sees about B.P. Koirala on a regular basis.

But how often do we get to read something on, say, shifting forms and sonic vocabulary of pop songs due to its mass production? Or the rise of “farmers’ markets,” gentrification of our cities, and its impact on its working residents? Or a cultural history of our museums? Or what our television sitcoms tells us about political polarization? Or a study of liberalization of Nepali economy and its impact on the waste coming out of middle-class households? Book criticisms don’t really exist, except as opinionated summaries. Almost nothing debate-worthy or of critical consequence is written in popular press on painting, music, economics, or architecture.

The gap in intellectual journalism is filled by less wholesome examples, of which television interviews seem to be some of the worst ones. An AP1 channel interview of one Dr. Achyut Aryal—introduced as an expert in Tibetan refugee issues—by Tikaram Yatri for his show “Tamasoma Jyotirgamaya” is a telling example.

Titled “Sansanipurna kurakani: Rohingya – Burma dekhi Kapan gumba samma” (Sensational conversation: Rohingya – From Burma to Kapan Gumba) on Youtube, the interview is replete with half truths, falsifications, and conspiracy theories masquerading as facts. Admitting that Burmese army might have committed a handful of excesses, Aryal says most of their action is for preservation of law and order, ignoring the several documented visual evidence about the massive scale of ethnic cleansing. According to him, the Rohingya refugee crisis is a “managed plot” created by Western powers, as a part of their geostrategic powerplay with China.

As part of the evidence, Aryal says the Americans have a history of manufacturing crisis—a well-known historical fact. But instead of citing valid examples like Vietnam War or invasion of Grenada, he refers to unnamed “serious researchers” in “journals and Youtube,” according to whom the 9/11 attack couldn’t have been done just by the hijackers. The Twin Towers were brought down by controlled explosions, he claims, indicating that US government was involved in some way. (False: See the link.) Yatri chimes in, adding that no senior official of multinationals working at the World Trade Center died, because they had been informed of the attacks. (False: Around 12 percent of those killed were executives and senior-level officials, a disproportionately high figure for a terrorist attack.)

(Readers might enjoy learning that according to his Academia account, Aryal has “conceptualized nearly half-dozen of theory on different disciplines,” including “Multi-Dimensional Interactional Literary Criticism Approach.” Among his innovations is the definition of “Non-Workers”: “a pure proletariat of post-postmodern era, who does have nothing to lose actually.” Also a “spiritual leader,” he says, “This is my last birth, the mission accomplished; there is no reason to come again.”)

In an earlier interview in the same show, lawyer, former attorney general, and United Marxist Leninist (UML) acolyte Yubaraj Sangroula brought up the worthy topic of World Bank’s push for privatization of Nepali industries. But he too slid into loony-bin theories before long. Instead of calling out the neoliberal program for increasing credit dependence of countries like Nepal, he argued this was part of the West’s plan to increase unemployment in Terai and create division between Madhes and the hills. Predictably, no evidence was presented, except the tautology that Western powers want to foster disunity in the country.

In their ridiculous leaps of logic, these shows might be unintentionally hilarious. But they have a large reach and influence public opinion. The same channel’s coverage of the Rohingya refugee is a good indication: their misleading reportage of the issue created a wave of ugly xenophobia and racist anti-Rohingya sentiment on the Nepali social media. In a media sphere where this level of dialogue passes as hard-hitting journalism, wouldn’t we be better served if instead of doing boring meta-analysis of our intellectual tradition, we got our public intellectuals to start pointing out such naked untruths?

This is the most tragic consequence of the lack of functional public-intellectual tradition in Nepal. All necessary arguments against global capitalism and neoimperialism get lost in spurious conspiracy theories about attacks on Hinduism (in Sangroula’s case, Buddhism) and national integrity. Instead of developing convincing arguments to counter the very real grip of non-democratic forces within and outside the country in our politics and economy, which could strengthen social movements, what we get is hack commentary and cynicism. Instead of demands for economic independence and fair distribution of wealth, we get anti-India jingoism; resistance to international neoliberal onslaught is replaced by anti-NGO hysteria.

This is a classic feature of petty-bourgeois ideology, where instead of questioning those who wield political and financial power, we heap our anger on the cultural “other,” often some marginal population or the immigrant. This is not unique to us; rightwing movements from India and Turkey to France and United States have been fed such media narrative. All the material needed to ignite progressive journalism gets perverted into the black hole of tabloid journalese. And having more ruminations on the state of public intellectuals (including this one—the fact must be faced) will do nothing to fix that.

Talking about the New York Review of Books in a celebratory documentary about the magazine, writer Zoë Heller says reading the Review “reveals all the failings of my formal education,” a sentiment familiar to those of us who’ve had less than productive time in schools and universities. But beyond the obvious benefit of nerdy nourishment, we must insist on the democratic potential of sustained, if difficult, intellectual journalism. This is where our media and our intellectuals can intervene. German poet Bertolt Brecht put it best: “Seek out the school, you who are homeless… Hungry man, reach for the book: it is a weapon.”

Shubhanga Pandey  Shubhanga Pandey is a Kathmandu-based journalist who writes on politics and culture. His work has appeared in Himal Southasian, Jacobin, The Caravan, among others. He tweets at @shubhangap.

The current protest is aimed at securing equal pensions for those who retired in the period between the end of the Second World War and 1994.