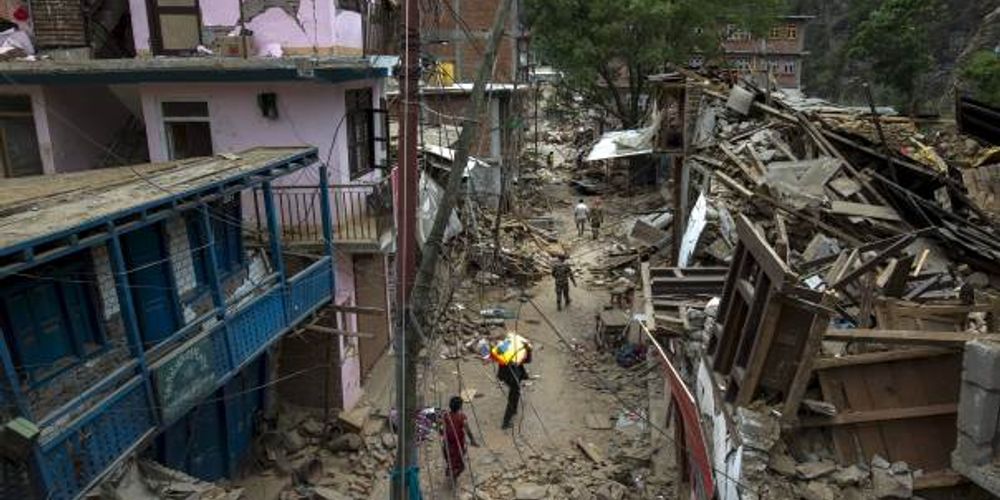 At 30, Guptadevi Shrestha still has her whole life ahead of her. But she is living on the edge, staring death right in the eye.

Shrestha recently reconstructed her house a few meters away from a landslide prone area along the Singati-Tamakoshi road section in Dolakha. Right in front of her house is a barren hill, greatly weakened by the 2015 earthquake. It could break loose any minute and devour the settlement. She knows that a calamity is looming and it haunts her everyday.

Ten people were buried under the debris when the deadly earthquake triggered landslides in 2015. Excavators mobilized for the Upper Tamakoshi Hydropower project had trimmed the landslides in the area but the debris did not stop falling for a long time.

Despite knowing about the dangers of living in landslide-prone areas, residents of many villages like Singati in areas earmarked for relocation have rebuilt their homes on the same risky lands. This is partly caused by the government’s failure to follow through on the plan to resettle dozens of at-risk villagers nearly four years after the earthquake.

Only one building out of nearly 1200 houses in Singati remained standing after the 2015 earthquake. But dozens of families have rebuilt their homes in the same landslide and flood prone areas. The earthquake survivors say they were forced to do so after the government delayed action on its promise to relocate people whose land was identified as unsafe for many months after the catastrophe.

Some locals also say that they are hesitant to leave their small but precious land in Singati as it is a business hub for northern Dolakha. Singati is the second largest market after the district headquarter, Charikot, and the only market available to many residents of the area.

“It is obviously scary to live here but we have no other place like this one,” said  Guptadevi Shrestha, who runs a grocery shop in her recently reconstructed three-storey building. “We decided to rebuild our houses here, fully aware of the risks.”

In addition to landslides and floods, the settlement is also threatened by the potential outburst of Tsho Rolpa Lake, which, at 4,580 meters, is one of the 21 largest and most dangerous Glacier Lakes in Nepal. Because of the high risk of lake outburst, the United Nations Development Programme has installed sirens in the settlement as part of an early warning system.

Singati, the epicenter of May 12, 2015’s devastating earthquake, will face dire consequences if any disaster takes place in the lake. The situation in Singati is so grave that outsiders avoid visiting the place unless they have absolutely no choice.

An engineer, Nirmal Darshan Acharya, who has been assigned the task of overseeing post-earthquake reconstruction work in Dolakha, has to frequently visit Singati and surrounding areas. But he takes every measure necessary to avoid the dreaded night stay there.

“In order to avoid staying the night in Singati, I either travel 40 extra kilometers to reach Charikot or entirely cancel and postpone my scheduled field visits there,” he said.

A saga of delays and denial

In the aftermath of the earthquake, relocation of risky settlements was given high priority. But the issue was gradually pushed to backburner as it took nearly 10 months for the National Reconstruction Authority (NRA), the body responsible for post-earthquake reconstruction, to take shape. A major reason for this delay was political bickering over who was to be named the head of the reconstruction authority.

It took another five or six months for the detailed housing survey to be conducted as per the agreement signed with donors who demanded exact details of the damage caused by the earthquake, purportedly to maintain transparency in aid distribution.

Despite knowing about the dangers of living in landslide-prone areas, residents of many villages like Singati in areas earmarked for relocation have rebuilt their homes on the same risky lands. This is partly caused by the government’s failure to follow through on the plan to resettle dozens of at-risk villagers nearly four years after the earthquake.

The subsequent study report published by the Ministry of Home Affairs recommended that residents of Singati be relocated immediately. But as the government displayed no urgency in acting on the recommendation, some locals gradually pushed the horror of the earthquakes to the back of their minds and decided that they did not want to leave the lucrative business hub. These residents started a political lobby to have Singati categorized as “settlement habitable after taking protective measures” from the category of “settlement to be relocated.”

“The NRA took a long time to form, so relocation of risky settlements was not possible at that time. But when we approached the affected communities for relocation later, some of the victims expressed a desire to stay” said Dhruba Prasad Sharma, a member of the Authority overseeing relocation works.

When a team of bureaucrats and geologists first conducted the study of quake-affected areas, they suggested that the government relocate 56 settlements in quake-affected districts. But upon its formation, the NRA mobilized its own research team, which enumerated the number of displaced settlements as 1,008.

As many as 3,800 households were in the “required for relocation” category and half of the earthquake surviving households have already been managed. Of the total households in inhabitable settlements, around 600 households have already shifted to safer areas on their own as they have land in other areas. Additionally, Non-Resident Nepali Association is rebuilding 648 households in the districts of Gorkha and Dolakha as part of its support to build integrated settlements in quake-hit districts as pushed by the reconstruction authority.

Instead of forcibly relocating people from risky areas, the Authority is striving for a household-driven policy on the matter. It has offered a maximum of Rs. 200,000 or approximately $1769 to landowners and land-ownership certificates to the quake survivors who can find land in safer areas, and an additional Rs. 300,000 or $ 2654 as housing reconstruction grant.

Additionally, if households ranging from 10 to 99 move to safer areas and build houses in an integrated way the government recognizes the settlement as integrated settlements and provides basic infrastructure facilities such as road, water and electricity among others.

NRA says it has distributed land certificates to 1600 households for building houses in safer areas.

“We calculated that some 400 households of settlements required to be shifted to safer zones have re-built houses in the same risk lands although they had initially made up their mind to move to safer areas,” said Authority’s executive member Sharma, “So, we are planning to conduct a study to figure out houses constructed in risky areas and asses the state of risky areas soon.”

Same as it ever was

Parallels with another Great Earthquake in 1934