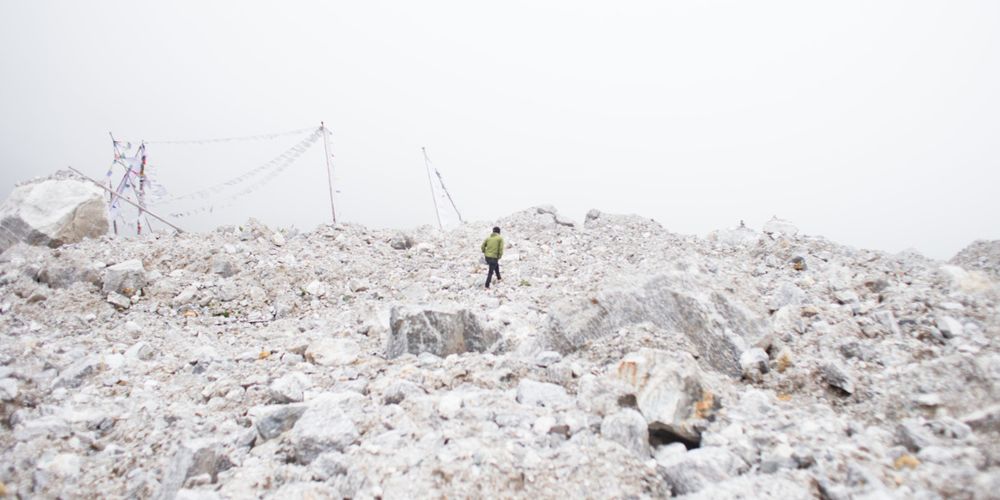 On April 25, 2015, when a large deposit of rock and snow fell from a height of over 1,000 meters over Langtang, it produced an extreme air blast comparable to those created during some of the most powerful (EF5) tornadoes.

The Langtang village was gone, and with it 178 of its nearly 700 residents, 50 foreign nationals, and unaccounted porters and daily-wage workers from neighboring villages.

Langtang Lirung, the highest peak of the mountain, has a history of falling rocks and powder avalanche. According to the older residents, a similar incident occurred during the 1934 Nepal-Bihar earthquake, when the village was settled at an even greater height. The devastation from that earthquake resulted in the “first shift,”­ when the village was rebuilt further down the mountain.

The valley witnessed another shift in settlement with the boom in tourism in the region. One after another, the little houses characteristic of the valley, many running as guest houses, moved further down the mountain and closer to the area that was hit on that fateful April day in 2015. But like before, Langtang is rising from the rubbles – quietly, inevitably.

A woman, recently back from the Yellow Gumba earthquake shelter in Kathmandu, has begun rebuilding her home. The government had announced a grant of Rs. 200,000 per household. But delay in distribution of the money meant that many families started the reconstruction on their own.

Sagar Chhetri  Sagar Chhetri (b. 1990), is a photographer based in Kathmandu. He is interested in socio-political stories. He studied photography at the International Photography Program at Pathshala South Asian Media Institute, Dhaka, and the Danish School of media and Journalism at Aarhus, Denmark. He is affiliated with Photo.Circle, a platform for Nepali photographers.

Same as it ever was

Parallels with another Great Earthquake in 1934