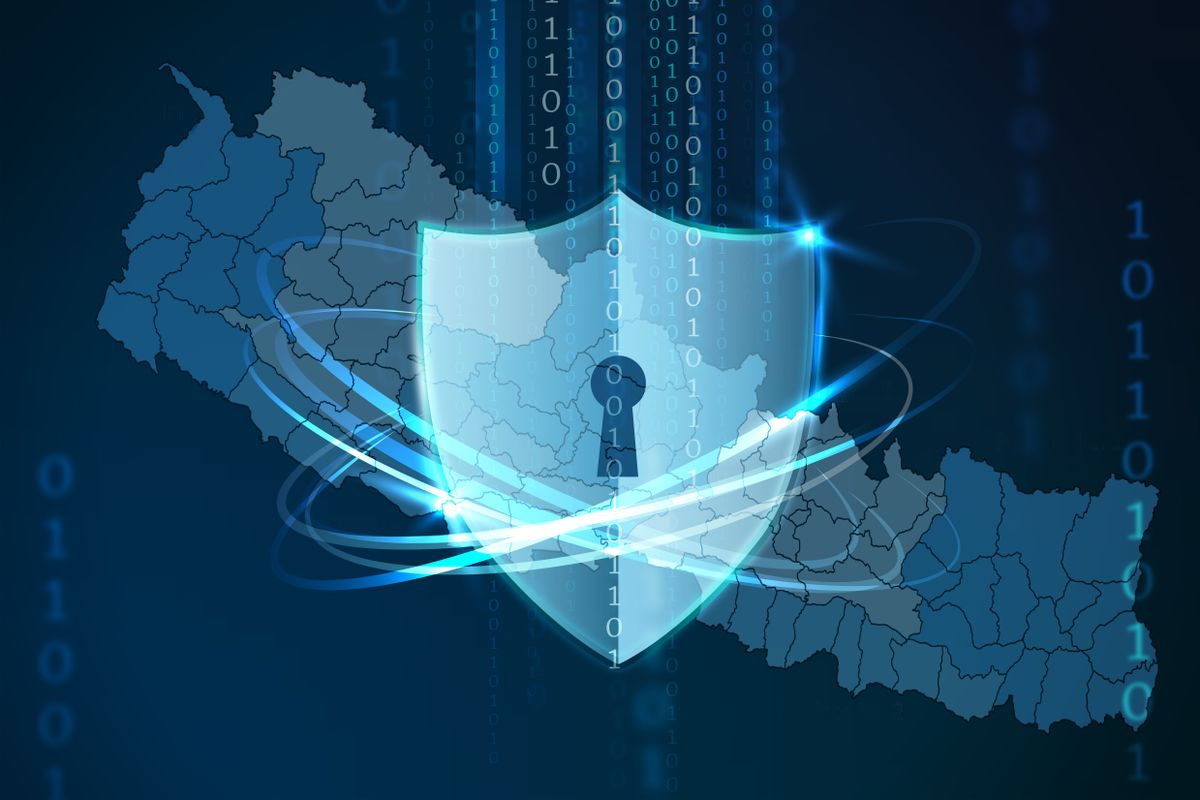 Last year, the European Union introduced two legislative bills to reign in the growing power of big tech companies like Facebook and Amazon. It was a pivotal moment in global governance that slowly began to call world states towards an obscure battlefield.

It has become an undeniable fact that the digital realm has become all-pervasive. Governments fight their wars on this front; capitalism has shifted its model from selling products to trading influence over this digital allspace. And for a developing country like Nepal, the urgency to strengthen and protect its digital realm is especially severe.

Nepal is a landlocked country situated between two tech giants: China, which has been accused of conducting hacking operations in multiple countries; and India, which was only recently embroiled in a scandal involving a spy software called Pegasus.

Nepal too has gained a well-earned reputation as a digitizing nation. We currently have 27.76 million internet users, which is estimated to be about 90 percent of the current population. Four million of these people use mobile banking services. And not to forget the Nagarik App — PM Oli's single redeeming grace that is making life easier for more than 600,000 people.

But the pace in which we are moving forward leaves us woefully unprepared for all the dangers that lurk. The fact is that Nepal is no longer a stranger to cyber attacks. Indian enthusiasts have defaced our government websites; Chinese nationals have come to Kathmandu just to hack ATMs and steal money. Incidents like the Vianet and Foodmandu hacks, accomplished by homegrown talent, point out a critical error in our outlook towards looming threats — threats that we are prancing towards with nonchalance.

The biggest scandals within the global cybersecurity space today are alarmingly far-reaching. So, the urgent question is how fast are we making strides — and with what outlook. The government must understand the alarming reality that is playing itself out everywhere around us.

When I think of these questions as an outsider, it is hard for me to reconcile a world in which the Nagarik app exists alongside the Solarwinds hack — an infamous incident that compromised the data of multiple US government agencies. In other words, how does a developing country like Nepal have a public app connected to multiple government databases, when hackers are so easily stealing secrets from the US government?

Certain government bodies are finally active in creating an overarching set of protocols to properly move Nepal into the digital era. But as these developments make their way through the red tape rigmarole, the changes are ultimately affected at a snail's pace.

Failing to develop critical digital infrastructures on time has led to numerous headaches for our government. Trolls have even porn-bombed a Nepal Tourism Board meeting chaired by Tourism Minister Yogesh Bhattarai. And let us not forget the time that a news portal accused its website developers of removing a news article from their website amid political machinations. The point, after all, is to create a reliable cyberspace that participants can trust to create discourse upon, and ultimately make their own.

In all, we've been painfully slow to take up the lessons being laid out in these incidents. Nepal government's chief body for detecting cyber threats, the Computer Emergency Response Team, produced a report last year that raised alarms about the sub-par server security of multiple government entities, including the home ministry. Until last year, our government was barely acquainted with the concept of website security audits — it had apparently conducted security audits for only 94 of the thousands of websites it runs.

It took until 2021 for the Nepal Telecommunications Authority to plan for an overarching cybersecurity mechanism to protect our country's digital space, to kick into action only in the next fiscal year.

The security threat that exists in lagging behind on developing our cyberspace is not the only consideration. Nepal has a lot to gain from a well-developed governance framework for the digital landscape. It is an argument akin to the ganja legalization one, with a very real pot of gold at the end of the legislation rainbow. From online businesses to e-sports teams to content creation companies, the private sector is keen to jump into any new business opportunity that arises in the digital space.

But regulation is needed to establish trust — trust in the fact that the online store won't rip me off; that the popular online marketplace won't overcharge me for products in some sham sale.

Hopefully, the e-commerce bill that was introduced recently paves the way for proper governance of the e-commerce sector. Stakeholders have already raised issues with the provisions, though. So, rather than bank on its effectiveness, we need continuous improvement that is sensible and makes a real difference.

Then, there are the abstruse technologies that common people don't often hear about, but which can support the most essential sectors of our society. Nepal even has proponents for adoption of blockchain technology, who envision its use in sectors like trade and agriculture. As a nation, we need to build our own knowledge and our own expertise on how to use this new human frontier to fulfil our country's specific needs.

But the Nepal government is sitting still with its hands tied. Our failures are the same old ones of delay and endless red tape. But digital technology today has transformed into a key human sector that is deeply connected with our sovereignty as a nation. It is a strange new age where the most powerful governments are preparing to face off against new beasts in the digital frontier — cyberwarfare, misinformation, and tech corporations too unwieldy to regulate confidently.

Meanwhile, our government saw it fit to let a key draft of cybersecurity legislation gather dust for four years. It is high time we come up with a sweeping new guideline that would act as a masterplan to properly lead our nation onward into the brave future, with considerations for every foreseeable threat or opportunity in the digital space.

The National Cyber Security Policy 2021, introduced just a few months ago, is the most ambitious attempt yet to set up a complete framework for regulating the digital sector. But it was bashed almost immediately by experts on some disappointing accounts, namely for missing out the crucial directions on how to implement those strategies.

And it is not that our government can’t manage to get work done if it is motivated to do so. We got rid of the spectre of load shedding virtually overnight. PM Oli wrote up no less than four bills in one year to rip and tear at our freedom of speech. Our government was even willing to spend 1 billion rupees to import content filtering technology into the country. If they want to, they do it.

In the modern world, the digital realm is all-pervasive and all-powerful. For Nepal, being left behind means being defenseless to its insidious influences. Surely, this calls for the utmost sense of urgency for our government to get up with the times.

Rajiv Prajapati  Rajiv is a former journalist for The Himalayan Times with an interest in tech and the connecting points between tech and society.

But it's not a big deal, say the journalists detained in Qatar for six hours