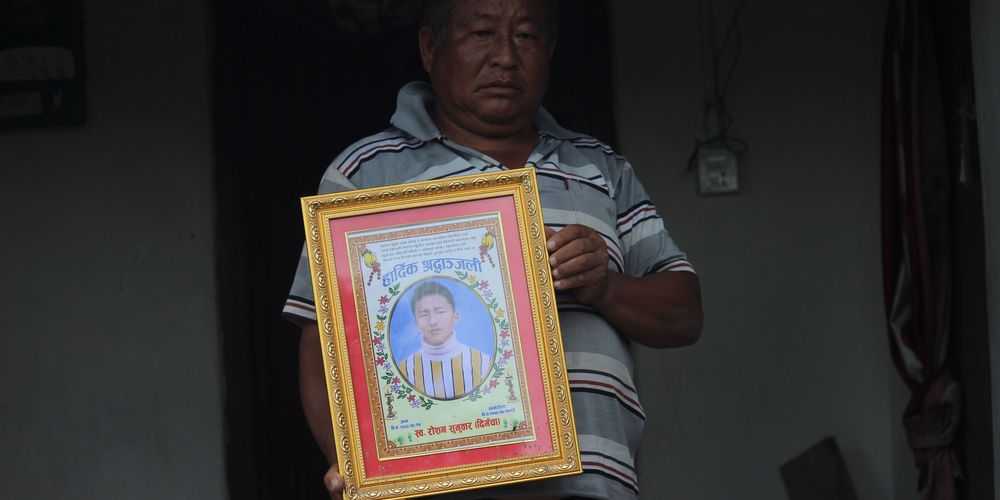 The village of Nangkholung lies in the remote eastern hills of Taplejung. Up in these hills, there is no functioning health post, let alone a hospital. Families living in the village often live in constant fear of catching even the most treatable of diseases. And so, those who can afford it, sell whatever land they own and migrate.

The Sunuwar family left Nangkholung and resettled in Benuwaja, Kankai Municipality 5, Jhapa many years ago. Tarakumar Sunuwar, 53, had moved his family in the hope that his children would not die untimely deaths due to the country’s poor health system. Tarakumar had never imagined that one day he would lose his son due to this very reason.

Roshan was the youngest and the most beloved son with four older sisters. He was studying in grade 10 at the nearby Kalapani School when the Covid-19 pandemic hit. And like thousands of other students in Nepal, Roshan did not have to sit for the Secondary Education Examination.

Without the examination holding him back, Roshan became like a free bird. He spent his days with his friends playing football in the school playground. He dreamt of becoming a football player some day.

But on August 8, last year, his dreams came to an end. Roshan was playing with his friends when he got hit in the chest by a ball. At the time, the incident seemed small but its implications turned out to be grave.

The next day, Roshan ran a slight fever. The family did not pay much attention to it. But when the  fever continued to rise, his parents started to worry. He began to complain of body aches too. They were afraid he might have contracted Covid-19.

They immediately took him to Surunga, a small town around 3km away that has a health clinic. The heath workers gave Roshan an injection to reduce the pain and fever. After a few hours, the fever appeared to be subsiding so they returned home.

But once home, Roshan started experiencing chest pain and the fever got worse. At 10 pm, Roshan’s father and a neighbor rushed him to the Marigold Hospital in Surunga. By this time, Roshan was having difficulty breathing. The health workers were hesitant at first to treat Roshan, thinking he might have contracted Covid-19, but they treated him nevertheless. Roshan’s father recalls, “They gave him some medicine, but he started vomiting blood instead.”

After seeing the blood, the health worker from Marigold referred Roshan to the Manmohan Hospital in Birtamod.

It was 11:30 pm by the time they reached Manmohan. Immediately, health workers suspected Roshan had Covid-19. By then, Roshan’s condition had gotten worse. Hospital staff said Roshan needed a ventilator, and he was immediately taken to the Birta City Hospital, which was another kilometer away.

Upon reaching the hospital, a health worker asked if they had a PCR test report. Without it, the worker said, Roshan could not be treated at the hospital and would have to be taken to Bhadrapur.

Roshan’s father was devastated. Roshan was already having trouble breathing. In a rush, they took him to Bhadrapur, which is 20kms away from Birtamod.

It was almost 2am when they reached the Mechi Zonal Hospital in Bhadrapur. Like all previous health workers, the ones here also suspected Roshan had Covid-19. Upon examining him, the hospital staff said that the patient’s condition had gotten quite serious and he needed to be placed in the ICU immediately. But the hospital did not have a functioning ICU, and again, referred Roshan to the nearby Pathibhara Hospital.

At Pathibhara Hospital, they were told that they can’t treat the patient without a PCR report. By this time, Roshan was barely breathing. He was taken back to Mechi Hospital. The health workers this time admitted him and started treatment. However, in the early morning, before sunrise, Roshan died.

Tarakumar’s suffering did not end with his son’s death. When Roshan passed away, there was no one to help them take the body to the morgue. Assuming that Roshan had died of Covid-19, health workers took a swab from his body for a PCR test, leaving the body unattended in a corner. Tarakumar and his friend had to transport the body themselves.

Despite the family not knowing how Roshan had died, the rumor that he had died of the coronavirus spread like wildfire in the village. Two police officers arrived at their house and took a full report from Roshan and his family. They later visited again with the ward chief, Krishna Rai, who sealed their house with tape, forbidding anyone to enter.

Tarakumar thought his son’s PCR results would come by the end of the day. But it only came back on August 12, four days after Roshan’s death. He had tested negative.

But rules are often applied differently.

The Sunuwar family’s tragedy brought to light how, in the wake of Covid-19, patients who come to the hospital with other ailments have been maltreated or denied treatment altogether -- reflecting the abject condition of the country’s health system.

“He kept saying he wanted to live, but no one listened,” says Roshan’s father. “If Pathibhara Hospital had just admitted him in their ICU, my son might be alive."

Translated from the Nepali by Yutsha Dahal. This story was produced for the Nepal Photo Project with support from the photo.circle 2020 grant.

Parwat Portel  Parwat Portel is a journalist with Kantipur Media Group. This story was produced for the Nepal Photo Project with support from the photo.circle 2020 grant.