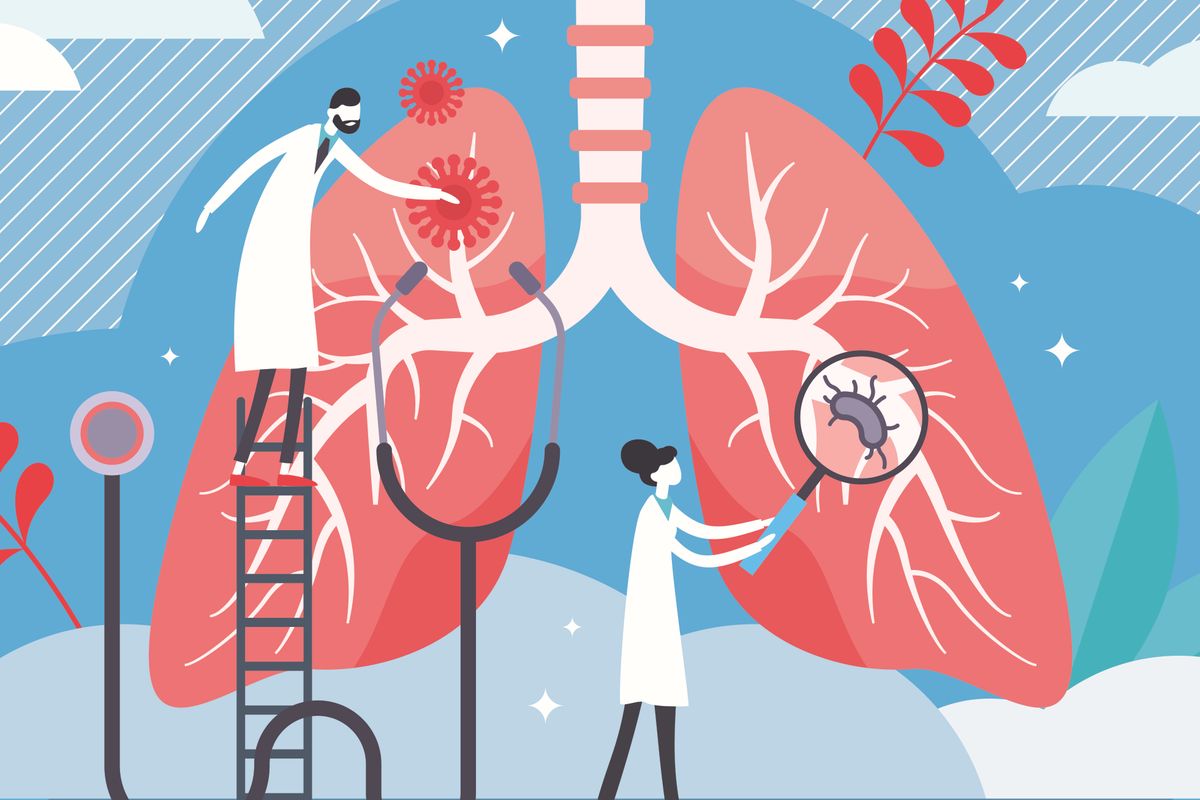 When his daughter developed a light cough sometime in April last year, Rameshwor Maharjan was not especially worried. His 21-year-old daughter Rezina had tested negative for Covid-19 on her PCR test, so he supposed it was just the flu and that the cough would go away in a few days.

But the cough continued for weeks. Although anxiousness had started to creep in, Rameshwor thought it'd be best to stay away from hospitals, as the country was then under the second nationwide lockdown. Hospitalizations had skyrocketed and the country was reeling under an acute shortage of oxygen.

“That was my biggest mistake,” said 51-year-old Rameshwor, a resident of Thaiba, Lalitpur.

Rezina died a month ago. The light cough wasn’t the flu and it wasn’t Covid-19 – it turned out to be pulmonary tuberculosis. When Rameshwor finally took her for a check-up in June, almost two months after the first symptom appeared, doctors said they had come in too late; bacteria had almost completely infected her left lung.

“She started vomiting blood; it was coming out of her nose too. She died around 15 minutes after we’d reached the hospital,” said Rameshwor.

Rezina had just one week left to complete her six-month antibiotic course, says Rameshwor, but the medicines were not working.“Her immunity had collapsed completely. She did not even have the energy to get out of bed,” he said.

Every year, tens of thousands like Rezina die due to tuberculosis. According to the recent WHO Global Tuberculosis Report 2021, the number of deaths caused by tuberculosis around the world in 2020 was 1.3 million, with an estimated 9.9 million people contracting the disease.

In Nepal too, pulmonary tuberculosis claims thousands of lives every year. According to the National Tuberculosis Prevalence Survey (2018-19), an estimated 17,000 people die due to TB every year. Over 117,000 people are currently living with the disease in Nepal.

However, despite the disease’s high prevalence and mortality rate, health systems around the world have not been able to build robust systems to control the spread of the disease, which is prominent mostly in low-income countries like Nepal. And things are only becoming grimmer: the bacteria that causes the disease is developing resistance against the antibiotics that are used to kill it. As a result, TB is becoming much harder to treat, increasing the risk of disease spread, severe illness, and death, and adding more stress to this global public health crisis.

What exactly happens when you get tuberculosis?

Tuberculosis is a bacterial disease that usually affects the lungs, but can also affect other parts of the body, like the lymph nodes, kidneys, and bones. It is airborne, meaning if you inhale the air around someone hosting the TB bacteria, you will likely be infected.

Once the bacteria enters your body, symptoms like cough, fever, loss of appetite, weight loss, and extreme tiredness surface. If left untreated, the bacteria will attack your body. In the case of pulmonary TB, it will attack the lungs and create holes in the lung tissue, which can result in respiratory complications, lung damage, and eventually, death.

According to a 2016 research paper, almost one in four people in the world is infected with the TB bacteria. But most of the time, the bacteria is latent, becoming active only when a person’s immune system is compromised.

As alarming as all that sounds, TB can be easy to treat, thanks to antibiotics. With a course of four standard, or first-line, anti-TB drugs (i.e., isoniazid, rifampin, and any fluoroquinolone), most TB patients can be cured. But in many countries, the bacteria present in the lungs of a TB patient are resisting these antibiotics.

Why are bacteria developing resistance?

Antibiotics were developed around the 1960s to prevent and treat bacterial infections in humans, animals, and plants. But when these drugs are overused or misused, then the bacteria they were designed to kill start building resistance towards them. This phenomenon is being seen not just in bacteria but in other microbes like fungi, viruses, and parasites as well. This phenomenon is known as Antimicrobial Resistance or AMR.

“Antimicrobial resistance is a global health threat and it will soon be the leading cause for mortality, even among treatable diseases,” said Adarsh Man Sherchan, a conservation geneticist and molecular consultant who is currently studying Antimicrobial Resistance loads in the Bagmati River.

This has already started happening. According to a report in The Lancet, bacterial infections that don’t respond to treatment are already a leading cause of death around the world. In fact, in 2019, antimicrobial resistance caused an estimated 1.27 million deaths.

“There are several reasons why AMR continues to emerge and spread. Chief among them are haphazard consumption of antibiotics with a history of self-medication and premature interruption of treatment,” said Sherchan.

What is the situation in Nepal?

Tuberculosis is such a prevalent disease in Nepal because it is “a poor man’s disease”, says Dr Sushil Baral, a health and development expert who contributed to building the National Tuberculosis Strategic Plan.

“Most cases are seen in people from lower-income backgrounds who do not have access to proper nutrition, compromising their immunity and making them susceptible to the bacteria,” said Dr Baral.

Detection of drug-resistant tuberculosis requires various tests, like rapid molecular tests, culture methods, or sequencing technologies. But such services are not available across the country, causing severe gaps in detection. According to a 2021 report by the National Tuberculosis Control Center, there are only 22 DR TB treatment centers across the country.

“Say I live in Bhojpur. To do a culture or drug sensitivity test, I will have to go to Dharan to the BP Koirala Institute of Health Sciences because health posts and even district hospitals do not have such sophisticated technologies,” said Dr Baral.

“And while treatment is free at government hospitals, in the process, all indirect costs will have to be taken by the patient and the family. Many are not able to afford it and thus do not seek the treatment they need. In this way, many cases never make it to our records. This is extremely dangerous, as this means an untreated patient with active DR TB bacteria could be infecting others,” said Baral.

This lack of availability and access to early screening of TB cases is the primary reason why DR TB cases have remained pretty much stagnant in Nepal.

“If the government does not take immediate action, then this will blow up because treatment is costly and if patients are not timely treated and tracked then it will continue to spread,” said Dr Baral.

What is the government doing?

To control the spread of TB and the various strains of drug-resistant TB, the government has developed a National Strategic Plan to End Tuberculosis in Nepal and a Tuberculosis Free Nepal Declaration Initiative Implementation Guideline, which aims to end TB by 2035 and put in place better testing facilities.

"There is a huge gap in detection on the part of the government which shows that access to healthcare is compromised. According to the government’s own estimates, there are 69,000 new TB cases annually but only around 27,000 people have actually been diagnosed,” said Dr Baral. “Where are the rest? Early identification is crucial to break the chain of transmission. Our country’s TB burden is high because our national surveillance program is not able to detect cases on time.”

This, however, is a global problem. According to the WHO, only about one in three people with drug-resistant TB accessed treatment in 2020. This paints a dangerous picture of how widespread the disease could already be.

With the COVID-19 pandemic bringing the world to a standstill for the past two years, major progress that had been made in providing essential TB services and reducing the disease burden globally, including in Nepal, has been reversed. Disruptions to diagnostic and treatment services have resulted in global TB targets falling off-track, and there has been a significant drop in the number of people newly diagnosed with TB. In 2020, only 5.8 million TB cases were reported, which was a huge drop from the 7.1 million cases in 2019, an 18 percent decline. According to estimates, approximately 10 million people developed TB in 2020, which means almost half of the number of cases went undetected.

“TB is a major, major global health crisis. And it is so because it is not about fighting a single disease. To fight tuberculosis, we have to fight illiteracy, poverty, unequal access to health care and social stigma, and now Covid-19,” said Dr Baral. “To eliminate the disease, we need a multi-sectoral approach to fight it. And that is a huge challenge.”