The high cost of low-wage labor

The high cost of low-wage labor

Tilakram Tharu died poor. Every winter during the biggest Tharu festival, the landless peasant who lived in Dang went to his landlord’s house and sold his daughters (he had three) as servants. Each went for twenty sacks of rice, barely enough to feed the family. Instead of going to school, his only son ploughed the fields with him. The family lived in a dirty, single-story mud hut with no toilet.

He would be surprised to see how well his grandchildren are doing a decade after his death. One works in Malaysia and the other in Saudi Arabia. Each grandchild abroad makes more money every month than their aunts did in an entire year at the landlord’s house. Their children go to an English-medium boarding school, the preferred choice for social climbers. The hut has been replaced by a two-story house that’s as good as the house of Tilakram’s former masters, who have now moved to Ghorahi, the closest town. Like his father, Tilakram’s son, now a grandfather, whiles away his days in torpor, drinking jaad, and bragging about the money his sons send home. A year ago he told the landlord he would no longer till the land.

It’s not just the Tharus who are overturning the entrenched hierarchies. Nepal’s migrant workers are changing the feudal order, says Mohana Ansari, Nepal’s first female Muslim lawyer and a former member of the National Women’s Commission—a rarity in a landscape dominated by high-caste men. Most Muslims in Nepal were once landless. Ansari’s own brother worked in Dubai for eight years. With the money he sent home, her father bought land, built a house in town, and sent his children to school. As more Muslims became educated, and grew richer, they broke free from their ties to the old landlords and politicians who thrived on petty patronage. Eventually, some became local leaders.

Although migrants may be transforming society, just how many there are remains a mystery. The Government of Nepal has kept poor records; it marks departures at the airport, but not arrivals. A survey in 2009 put their number at 2.1 million, excluding those in Western countries. A million more have received work permits since. Official data excludes women since they are forced to use illegal channels to leave the country after the government banned women under 30 from working in the Middle East, citing exploitation. 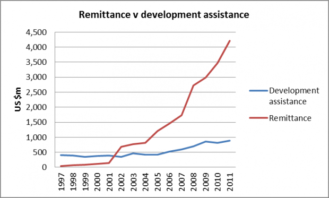 Remittances have surpassed foreign aid as a proportion of Nepal's GDP. The Record Graphics. Source: The World Bank.

Together, migrants sent home more than USD 5 billion last year through formal channels alone, according to statistics from the World Bank. This money is equal to 25% of Nepal’s GDP, and about five times more than the amount of foreign aid the country receives. And it is expected to rise. Yet the reach and influence of migrants in policymaking is limited compared to the clout of the donors, says an economist at one international organization who asked to remain anonymous.

Relative to its GDP, Nepal is the third-highest remittance receiving country in the world. Only Tajikistan (48%) and the Kyrgyz Republic (31%) receive more. The inflow of Riyals, Ringitt, and Dirhams is fueling a consumption boom. Last year, imports grew 20%,  a rate equal to the growth in remittances.

The rise in purchasing power has benefitted Nepali entrepreneurs, too. Last year, Dang, the district where Tilakram lived, saw three cement factories open. “Everybody has cash to spend,” says Punit Sarda, a manufacturer based in Biratnagar. “If only there was a steady supply of electricity, you could produce anything and make money.” Sarda plans to go to Rolpa, the heartland of the decade-long Maoist rebellion that ended in 2006. Its hills are rich in limestone, and he wants a cement factory of his own to profit from the construction boom. Nepal is the least urbanized country in South Asia, but it is urbanizing the fastest.

The inflow of Riyals, Ringitt, and Dirhams is fueling a consumption boom. Last year, imports grew 20%,  a rate equal to the growth in remittances.

The thought of millions of youth abroad sending home valuable foreign currency does not excite everyone, however. From government officials grumbling about money spent on consumption (We must invest!, they say) to human rights crusaders who decry the “slavery-like” working conditions migrants face, a vocal chorus calls remittances a mixed blessing. With able bodies toiling abroad, some worry Nepal will miss out on the demographic dividend, which is accrued when the size of the working-age population expands as child mortality falls and life expectancy increases. Politicians say it’s not a long-term solution to widespread unemployment.

In the countryside, mothers complain of children growing up without fathers. The wives of migrants—daughters-in-law without husbands—are sometimes accused of bringing shame to their family by having affairs, a charge Ansari considers sexist given that few question the infidelities of men abroad.

And then there are the horror stories trickling in from abroad. The consequences of migration can be tragic for the unlucky. Nepal’s only international airport desperately needs a morgue to house the bodies of dead workers shipped home. Three to seven arrive each day. More die in the summer because of heat. The lists of the dead coming from Saudi Arabia, Qatar, and Malaysia show suicide and cardiac arrest to be common causes of death, along with unexplained “natural causes.” Workers returning from the Middle East blame a combination of extreme heat during the day and air conditioning at night, a combination that can be fatal, especially when one is undernourished, fatigued, and consuming copious amounts of cheap alcohol. Add to that shoddy living conditions and a lack of proper on-site safety measures. For these reasons, the director general of Nepal’s Department of Labour has said most deaths abroad “should be treated as murder.”

Who is to blame? Multinational companies deny any responsibility, passing the blame to the companies that supply labor. The host governments do the same.

“Nepal should shoulder greater responsibility to safeguard the migrants’ welfare, both at home and abroad,” says former ambassador to Qatar Suryanath Mishra. “Instead of blaming everything on the host country. Recruiting companies usually give fake contracts to a worker, which means dishonest employers can’t be taken to labor courts abroad. Instead of seeing migration for work as an aberration, the government can regulate it better.”

But that isn’t easy. The explosion in migration has meant that labor exporters have become wealthy and their clout is spreading to the government and political parties. For example, during the last Constituent Assembly election, the owner of one recruiting company was able to get a “ticket” to contest the election by throwing money at the parties. The state minister for Labour and Employment, a Nepali Congress member, is known to own a manpower company that exports laborers. Even the building where the government’s Foreign Employment Promotion Board is housed is owned by the head of a recruiting company. Some are charged exorbitant fees for visas that should be free. Up to two-thirds of the contracts workers are given are thought to be fake, with the real ones produced soon after the workers clear check-in at Tribhuvan International Airport. Although government officials know very well the rampant irregularities in the recruiting process, they haven’t been able to halt them.

Just where the money flows is also undocumented. The remittances workers send home to their families draw much attention from stalwarts of foreign aid and from the government, but it is not known how much money the recruiting companies and the government make from migrant workers. The Foreign Employment Promotion Board, which offers about five lakhs to the families of the dead (terms and conditions apply), runs a surplus of billions of rupees collected from workers for the Welfare Fund. Officials have confirmed that some of this money has been used to run embassies abroad, including in buying vehicles for government staff. The embassies send the money collected for the “labor demands” of the labor-importing companies directly to the national treasury. But the embassies themselves are understaffed or underutilized. Migrant workers often wait in lines all day just to have their complaints heard. And the Nepal government does not have adequate shelters to house workers facing extreme difficulties, including those who have been trafficked and rescued. Among the workers there is extreme antipathy, bordering on hatred, toward the Nepali embassies.

Media loves the misery. Western media outlets have put a steady spotlight on Nepal, connecting the migrants’ working conditions to the FIFA World Cup to be held in Qatar in 2022. It is an issue that deeply concerns the football-loving public and has attracted many readers. But it is not only Nepalis who face bad working conditions in Qatar and elsewhere. [pullquote]Though Nepalis tend to be recruited to do the most menial jobs, many Bangladeshis, Indians, Pakistanis, and Sri Lankans work on the same sites, doing the same jobs, carrying the same risk.[/pullquote] Qatar in particular has received much attention, but it is not the only country where workers’ rights are routinely violated. The death reports from Malaysia, the number one destination for Nepali migrants, show alarming rates of suicide. Yet the country’s labor policies have gone largely unnoticed.

Weyermann, who has participated intergovernmental meetings of labor-sending countries, considers Nepal better than its neighbors when it comes to negotiating on behalf of workers—although it’s hard to see how that has benefitted Nepali workers abroad—because there’s a general acceptance in Nepal that migration is not ideal. Countries bulging with population pressure, such as Bangladesh, are careful not to alienate labor-importing countries, and are leading the race to the bottom by offering as few  benefits to workers as possible.

For the Nepal government, migration has been the best way so far to avoid the perils of millions of restless unemployed youth. It is widely assumed that their presence would lead to instability. “If there is no migration, a flood [of youth] will break the dam of stability, and sweep everyone off,” says Indra Dev Pandey, labor attaché at the Nepal Embassy in Qatar. What direction Nepali society would take with millions youth in its streets is for now just a thought experiment. But through their absence, and the money and attitudes they send home, migrant men and women may already have profoundly changed their societies.

Despite public outcry over worker exploitation, for the poorest, migration remains the only way out of poverty. And the supply of labor is not about to dry up anytime soon. Hordes of restless youth in this country of 28 million are waiting to join their toiling counterparts abroad; just as soon as they can get a loan to pay for a passport and a plane ticket. In poor Dalit villages of Madhesh and the Far West, for example, men opt for India because they do not have enough money for Malaysia or The Gulf. “Nobody will lend money to us,” one man complains, mournfully. This story can be heard again and again across South Asia.