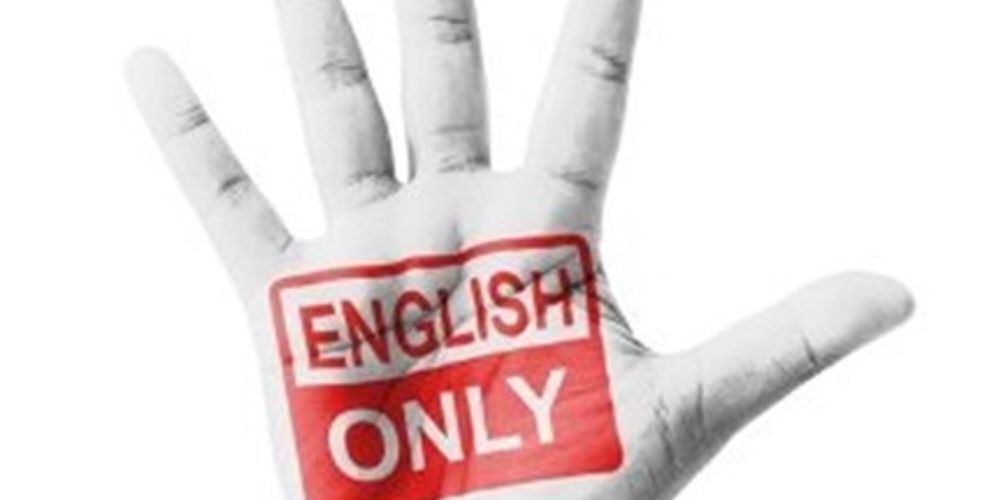 “Think in English! Drink in English! Laugh in English!” This is what one of my English teachers used to say playfully back in school--upon which, we used to make noises asking if that would qualify as English laughter. We paid fines, we swept floors, we even suffered beatings for uttering Nepali words in our English-medium school. Amongst our friends, there were “spies” who would secretly report to teachers, our “offence of speaking in Nepali.” The reason behind this arrangement was to ensure that we had good English proficiency. After all, our teachers and parents are aware that English is the language of globalization--of business, diplomacy, science and technology.  We were made aware of the significance of English from a very early age. How we used to take pleasure in flaunting our English skills! It was not a coincidence that my favorite teachers were always the ones who  taught me English. To be worthy of my admiration, a teacher had to qualify the English standards that I had set in my own juvenile brain. Making faces, rolling eyes and giggling when someone pronounced “ha-nest” to “honest”, “shu-ld, cu-ld,” to “should, could” was very common even while in university. After all, English signifies class. The better the English, the smarter the person. The anglified pronunciation of Nepali words, that was the way of the city. So cool, so seductive.

While I did not find it difficult to understand English, deep down, I was always concerned that my speaking English was not good enough.  I was extremely apprehensive that my ambition of becoming internationally competitive would not come true with the English learnt in a small school in a small town. After I came to Kathmandu and joined law school, I tried to enroll for advanced English courses in fancy institutions, but time and money would not permit me to do this. Improving English has always been a continuous, never ending process in my life. However, a few years ago, I had a strange realization. While in a group of multilingual people, someone abruptly asked me how we say “hello” in Nepali. It took me few seconds to realize that it was “Namaste.” I said it’s “Namaste.” But I was not convinced myself if “Namaste” was actually equivalent to “hello.” For me, “Namaste” has always been something which my mother would nudge me to utter while greeting some distant relatives or outsiders. It was definitely not equivalent to “hello!” I was very surprised; the basic greetings of the Nepali language are almost nonexistent among young people like us. Over the course of time, I began to notice how my brain would subconsciously pick the English version of text when something was available in both English and Nepali. Those life quotes and literary lines always sounded better in English than in Nepali. Speaking extempore in formal occasion was always easier in English rather than in Nepali. I have always hated Nepali as a subject in school, maybe due to its comparatively complex and time-consuming script or maybe the fact that it was just one subject and everything else was in English. But it never occurred to me that someday I would be questioning my fluency over my mother tongue.

I had always believed that English taking over all other languages was inevitable, and all we can do is to make this transition easy. It was only after I started living in Belgium, my whole perspective on English encountered a drastic change. I began to notice that the Europeans had a good grasp on three to four languages including English, without having anglified their schools. My Dutch speaking university has everything in Dutch. They have English programs too, but the environment is Dutch. All the internal communications are done in Dutch. How seriously they take their language, how seriously they live their language. And, they still have excellent English. One day, a Chinese friend of mine said, “I know Nepal was never colonized and your official language is not English, but I can’t understand how it is possible to complete all your studies in English medium.” Most of my foreign friends, the Chinese, the Arabic, the French, the Dutch... almost everyone learned English as just another language. They did not have to submit themselves to English language. While observing them, I felt a strong sensation of embarrassment. I don’t know if “embarrassment” is an appropriate word to express that feeling. But I felt something, and that feeling was bad; jargon like heritage, culture, civilization, philosophy moving around in my head. Something like – the civilization I represent, not being strong enough to claim its presence. This was definitely not the case as I am a speck of philosophically and culturally rich Hindu tradition. The “English” I had learnt at a high cost, compromising my fluency of Nepali is something I can never claim ownership of. It was something I could never say mine, even if I managed to excel it.

When I think of Nepali society, it really makes me sad that we consider English as a barometer of intelligence. A mistake in English grammar degrades our status and a mistake in Nepali grammar does the reverse.

It makes me sad to see how our young generations see our parents and grandparents as illiterate just because they don’t understand English. Obviously, it’s not necessary to showcase the importance of English in today’s world, everyone knows it. However, the approach we have taken to teach a language to our children is deeply flawed. The fluency of Nepali in youths is declining very rapidly since speaking Nepali is prohibited in most schools and English is perceived as sign of modernity and high status. Standard Nepali Language has become extremely rare in young Nepalis.

Language is the carrier of culture, philosophy and identity. There is a considerable amount of literatures claiming how language structures our thoughts. Linguists argue that to impose a language is to impose a way of thinking. While we are concerned how English has been eroding our local culture, it is sometimes lamented even in England itself, for though the language that now sweeps the world is called English, the culture carried with it is American. Today it is estimated that the world loses a language every two weeks. Linguists have predicted that between 50 and 90% of the world’s languages will disappear by the next century. Well, I am sure Nepali is not going to be extinct anytime soon. But I am deeply concerned if we will be able to continue for the longer time, the way of thinking that is peculiar to us.

In one incident, I deeply felt how some aspects of English contravene with our way of life. Nisha, who is my aunt’s daughter has been very close to me whole my life. In Nepali, we have no terms distinguishing a sibling and a cousin. But in an incident, when I introduced her as my sister, a friend of mine shouted with laughter, “Dumbo, she is your cousin, not sister, that’s how it is in English.” I coped with the situation by laughing it off. But I hated English for taking away my sister and making her a cousin, in contravention with how I have been raised.

This is a minor instance. However sometimes there are big influences of language. The language has a tremendous impact on way of thinking and problem solving. One of the biggest examples is the invention of “zero” in mathematics. While the other cultures believed that “nothing” cannot exist, the ancient Hindus were philosophically open to concept of nothingness. The concept of “sunyata,” meaning nothing led to inscription of number zero which changed the route to modern technology. It will be hard to deny that there are many concepts and outlooks hidden in our language which we cannot pinpoint but we have unknowingly been following for generations.

Departure from our language also depart us from our philosophy and outlook we have inherited. If we see a broader picture, it is a loss to human community as a whole; many perspectives are erased with erosion of language.

The endeavor of this essay is not to attack the English language but rather to preserve Nepali languages and ways of thinking. And without any irony, I am making this plea in English. In the colonial education system, students were physically punished for speaking their native languages while at school. Some authors refer to this as being “like separating the mind form the body.”  Our approach of anglifying our schools, is colonist although we brag about the fact that we were never colonized. Today, the media, internet and technology have made the English language very easily accessible. Therefore, schools should relax their position on maintenance of English-only environments. Rather, they should adopt an approach which would also facilitate mastery over standard Nepali. Hebrew and Czech, amongst others are notable instances of how languages have been revived. We have to be cautious that a day should not come when we have to struggle for revival of our language, as a cliched yet important  English phrase goes, prevention is always better than cure!

Saurav Ghimire  Saurav Ghimire is a PhD researcher at Vrije Universiteit Brussel (VUB)- Centre for Private and Economic Law. His study focuses on Intellectual Property Rights, in particular Patents and Plant Breeders’ Rights and their impact on Human Rights. He enjoys writing opinions on various social and cultural issues.

A year on, Kathmandu Metropolitan City’s mandatory Nepal Bhasa educational policy is not sitting well with students, teachers, or schools.