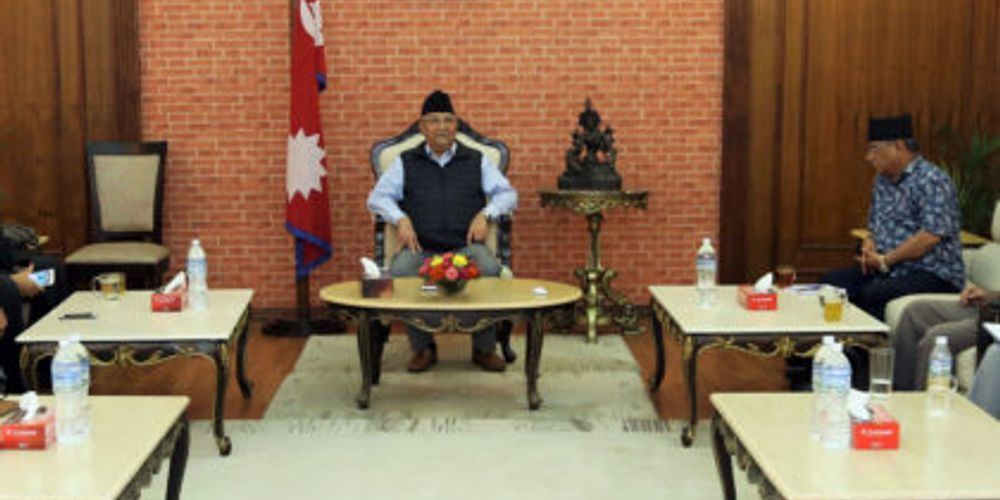 Pressure continues to mount on Samajbadi Party Chairman Upendra Yadav to leave the government. On November 3 his party, the minority partner in the ruling coalition, wrapped up a three-day national gathering of party cadres with a renewed commitment to ensuring the constitution is revised; the ruling Nepal Communist Party (NCP) shows little interest in doing so.

The Samajbadi Party demands that Nepal’s province borders be redrawn to form the 11 states recommended by the expert committee on federal restructuring during the first Constituent Assembly (2008-2012). On November 14, Baburam Bhattarai, the head of the party's federal council, formally raised the issue, saying that the party should quit the government if the NCP  ignore calls to revise the constitution. The Samajbadi party was formed after the merger of former prime minister Baburam Bhattarai’s Naya Shakti Nepal, and Yadav’s Federal Socialist Forum-Nepal in May 2019. The FSF-N joined the Nepal Communist Party government in May 2018, after the NCP signed an agreement—devoid of details— that the constitution would be amended.

Prime Minister KP Oli’s reluctance to revise the statute is making Yadav’s position increasingly untenable, as sections of the Samajbadi Party not only want Yadav to walk out of the government, but also to merge the party with the Rastriya Janata Party-Nepal, which it is currently in coalition with governing Province 2, and thus bring together many disgruntled groups and launch fresh protests for amendment. The RJP-N cites the SP’s participation in the Oli government as incompatible with any proposed unification. Other factors hindering the move are disagreements over the organization and leadership of the new party. Yadav appears to be hedging, waiting for progress on unification before he quits his posts.

Huddling and juggling: A week in the life of PM Oli

Prime Minister KP Sharma Oli spent much of the past week on one-on-one huddles with top leaders of his ruling Nepal Communist Party (NCP), planning a reshuffle of both the Cabinet and his personal team of advisors. Prior to that, PM Oli had surprised observers by demanding that his advisors resign, and recalling the governors of all seven provinces. His advisors, the governors, and members of his own Cabinet had appeared equally surprised.

On November 13, Oli held a dinner meeting with Madhav Kumar Nepal, also a former UML prime minister who believes he has been sidelined since the UML merged with the Communist Party of Nepal-Maoist Centre in October 2017. These differences of opinion have hindered the formal unification of the party, including the formulation of rules and regulations, and party structures. Oli and Nepal reportedly agreed to work together putting aside personal and political differences. If true, this is a significant improvement in relations between the two, which hit a particularly low point when PM Oli, ahead of his second emergency medical trip to Singapore in August 2019, turned down Nepal’s good wishes and instead accused him of harboring ill will and praying for his (Oli’s) death.

Before meeting Nepal, Oli had met Bam Dev Gautam, the proposed vice-chairman of the NCP, and offered to appoint him to the national assembly and induct him in the cabinet with the portfolio of deputy prime minister. Gautam, who lost the parliamentary election from Bardiya, reportedly told Oli that he would accept the offer only if the PM could guarantee the amendment of a constitutional provision that bars national assembly appointees from becoming prime minister. Gautam played a key role in the rise of at least three UML leaders he considered junior to the post of party chief and prime minister, and resents his colleagues, including PM Oli, for not returning the favor.

Aides of Nepali Congress lawmaker Mohammed Aftab Aalam—who is on trial for allegedly killing as many as 23 people on the eve of the 2008 Constituent Assembly elections—have been threatening witnesses against Aalam to change their statement, according to media reports.

On November 12, Gauri Shankar Ram, a resident of Sitamarhi in Bihar who survived the carnage told the news portal Onlinekhabar that he was forced to change his planned statement after Aalam’s goons held him hostage and forced him to sign a paper altering his testimony. Ram had survived by fleeing the site before Aalam and his aides forced those injured and killed into a burning brick kiln to cover up attempts to rig the election, after Improvised Explosive Devices (IEDs) that they were making at his cottage accidentally exploded. Ram had earlier told the Rautahat District Court that the burn injuries to his face were caused by a stove exploding.

On November 13, The Himalayan Times reported that it had accessed an audiotape of Aalam’s aides threatening to kill family members of witness Oshi Akhtar after she turned down an offer of five katta land and Rs 500,000 to change the statement. The previous week, Akhtar had gone to the Rautahat District Court to change her statement, saying her husband was alive and working aboard. The court refused to take her statement. Bhupendra Khatri, chief of Rautahat District Police, told The Record that the police has increased protection for witnesses and heightened security in the district.

Bhaktapur locals and, following them, Charikot natives have found an innovative way to deal with big contractors who, thanks to powerful friends in Singha Durbar and elsewhere, continue to win big civic projects despite their repeated failure to deliver.

Frustrated by years of unexplained delays in the construction of the Kamalbinayak-Nagarkot road, Bhaktapur residents have taken to putting up posters featuring images of dogs, apes, and monkeys alongside photos of Sharada Adhikari, the proprietor of Shailung Construction, the company behind the road project. Adhikari owns the bungalow currently home to Nepal Communist Party Co-Chair Pushpa Kamal Dahal Prachanda and his family, and is considered one of Prachanda’s close confidants.

The posters, tacked on to electricity poles, trees, and walls, have delighted social media and are being shared across Facebook and Twitter. While some criticize this new form of protest for its lack of civility, many, including mainstream media, believe it is novel and effective. Setopati reported that the contractor has started working round the clock after the appearance of the posters.

Symbolic and often humorous protests, such as planting paddy in broken, muddy roads, are an increasingly common response to corruption, inefficiencies and irregularities in development and infrastructure projects.

Social reformer Dr Govinda KC abruptly ended his 17th hunger strike on November 12, after just nine days, in view of the ongoing tensions between Nepal and India over the latter’s new political map that again depicts the disputed Kalapani area of Nepal’s far-west as part of India. KC has been striking for more affordable and accessible medical care and education.

“I am ending this satyagraha keeping in view the growing voices over the serious issue of nationalism and the sentiment of the general public on the issue,” KC told media before drinking juice offered to him by four-year-old Shrinyas Jairu, in the Daldeldhura hospital. A day earlier, Education Minister Giriraj Mani Pokharel had publicly urged KC to end the strike, saying the government was occupied with the more pressing issue of safeguarding national sovereignty. KC warned that he would resume his hunger strike if his demands were not met.

KC also wrote a letter to Indian Prime Minister Narendra Modi, asking him to respect Nepal’s sovereignty and territorial integrity. “I do not know much about diplomacy, [or the] theory and practice of complex geopolitics. As a layman citizen, all I know is: citizens of every country have the same respect and self-dignity,” the letter reads.

Despite a crackdown on protestors, public anger in the country remains high about the Indian Survey General’s new political map, issued to reflect the division of Jammu and Kashmir. On November 13, two separate prerogative writs were filed at the Supreme Court demanding that the government of Nepal scrap incorrect and/ or incomplete political map, that did not include Kalapani, used by various government agencies in their websites and documents.

Much goodwill, nothing concrete: the Bangladeshi President's visit