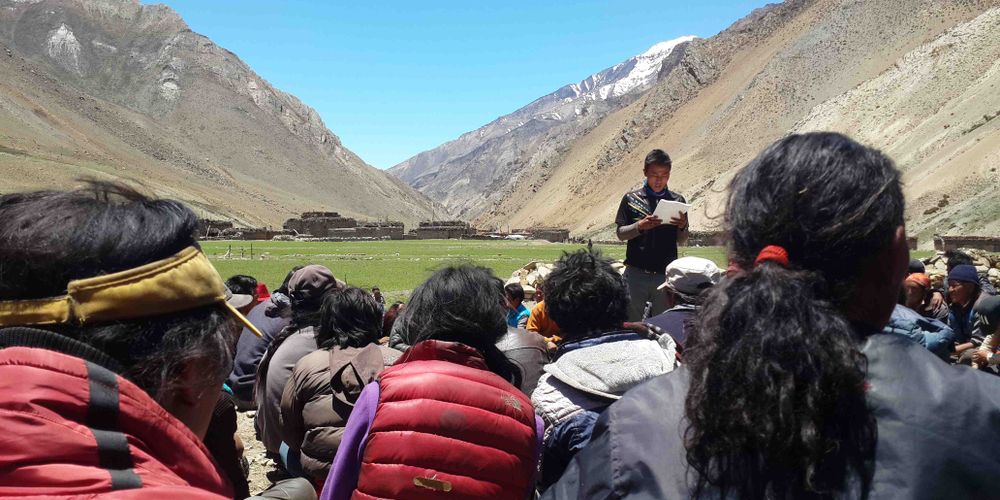 Nepal’s National Human Rights Commission began its investigation into the clash on the evening of June 3 between the inhabitants of Dho in Dolpo—the upper region of the Dolpa district bordering Tibet—and a team from the Nepal Police and Armed Police Force. Eyewitnesses have alleged the police beatings lead to death of two men, arrest and torture of a dozen, and injury to many more.

The Commission began its work following the death of one of the injured, Thundup Lama, 48, at Om Hospital in Kathmandu on June 9. Lama had been airlifted to Kathmandu for treatment the day before, and his death is the second due to police beatings, locals allege. The first to die was Phurwa Tsering, 32, who was found critically ill the morning after the clash last week with injuries on his back and the face. Tsering, a father to three, and husband to a young wife, died the same day. He was cremated without an autopsy, raising fears of a cover-up. The Chief District Officer claimed that the death was the result of an unrelated accident.

“A complaint has been filed and investigation has begun. The Commission’s Nepalgunj regional office will visit Dho and submit a report on what happened,” said Jeevan Neupane, representative of the Commission, speaking outside the morgue at Om Hospital. From there, Lama’s body was taken to Teaching Hospital for an autopsy.

The spokesperson for the Nepal Police, Ganesh KC, dismissed the allegations of wrongdoing, calling the reports of police brutality “media rumors.”

“The first death was due to an accident and the second was because of chronic liver disease caused by heavy drinking. We want to investigate the death, that’s why we’ve asked for an autopsy,” KC said. Asked about the police attack on the villagers, KC said that two people had sustained minor injuries, but they went home the next day after a check up at the health post.

“A black day in Dolpo’s history”

The clash resulted from a dispute over who can collect levy from the throngs of people who swarm to Dolpo every summer to collect yarsagumba, a caterpillar fungus prized in China for its medicinal qualities. People from districts across Nepal travel to Dolpo to pick the fungus, and both the local committee of Dho and the Buffer Zone Mangement Committee of the Shey Phoksundo National Park have been collecting money from the pickers for the past several years.

The total levy raised by the local committee can sometimes reach more than three million rupees in a single year, according to one estimate, and the Buffer Zone Committee’s revenue can be ten times as much.

“The money made by the local committee, made up of seven villages, is used to buy rice. A little is used to repair old monasteries and the leftover distributed to the families,” said Phurwa Gurung, of the Dolpo Concern Centre.

This year, the Buffer Zone Committee, whose money raised from the levy does not trickle back to the village, wanted sole control over the tax. A team of 35 men from the Armed Police Force and Nepal Police, together with members of the Buffer Zone Committee, trekked to Dho— it which is at an altitude of 3,900 meters and is a three-day trek from the district headquarters in Dunai—on June 2 and confiscated NPR 800,000 and receipts of payment from the locals.

Resentful villagers held a meeting early the next morning at a clearing called Tapsurkhang to decide what to do next. The meeting, which included one member from each family in the village, submitted a petition to the representative of the Buffer Zone Committee. The petition included three demands: first, the money and receipts that were confiscated should be returned to the villagers. Second, picking the caterpillar fungus in the Lang pasture area should prohibited because it is crucial grazing land for yaks and horses. (More than 50 yaks, each worth NPR 100,000, have died in the last two years because of a lack of grazing land, claimed one villager.) Third, the locals should be allowed to continue raising the levy from the yarsagumba pickers.

The representative from the Buffer Zone was summoned and the petition delivered, but there was no agreement. The meeting was adjourned, and the participants decided to meet again that afternoon.

According to Norbu Ghale Dolpo, an activist for the rights of the indigenous, the general sentiment in Dolpo was that locals should be allowed to raise the levy from the yarsagumba pickers, or there should be no picking at all, because the outsiders have ruined the environment essential for their survival.

At 3 p.m., a group representing the villagers; the police inspector, Jeevan Malla; and the representative of Buffer Zone Committee sat for another round of talks at a house in Ward 2. The meeting was soon interrupted by the noise of villagers outside chanting “Return our receipts!” Soon after, the police attacked the protesters with sticks, and the villagers retaliated with stones. The police then fired rubber bullets and the crowd scattered. A short time later, a team of police went door to door, snatching anyone on their list to be arrested and beating whoever else was at home, men and women alike. According to sources who wished to remain anonymous, those arrested were beaten and tortured throughout the night, and repeatedly told “This is Nepal, not your country.” They were released the next day after being forced to sign a document stating that Tsering’s death was an accident.

“I was on the phone with the assistant Chief District Officer when the police charged at me, saying ‘Saala bhoteys, I’ll finish you off,'” said Phurwa Gurung. “I sat on the ground and raised my hands, in a gesture of surrender, but still they kicked me in the head. Later, I ran off and hid the whole night. A lot of men from Dho spent the night out in the field, in negative temperature, because they were too scared to return to their houses.”

Reports of the standoff in Dho last week prompted Sey Namkha Dorje, a monk and the chairperson of the Dolpo Concern Centre, and a Constituent Assembly member from the CPN-UML, Dhan Bahadur Budha, to fly into Dolpo on June 4, the day Tsering died. They planned to “mediate” the conflict. After returning to Kathmandu on Sunday, June 8, the two, fresh off the helicopter at the airport, gave conflicting accounts of what happened.

“Phurwa Tsering’s death was an accident,” said Budha, repeating the position of the Nepal Police and the District Administration Office. “We mediated between the locals, outsiders and the police. The Lang pastures will be open for picking, and only the Buffer Zone Committee will raise the levy, 80 percent of which will go to Dho.” During a sidewalk interview with the few journalists waiting to see him, Budhha let slip that houses in Dho had been damaged and about 200 villagers were injured.

“A gross violation of human rights took place in Dolpo and it must be investigated,” he said, “Dolpo’s men have died of police brutality. I spoke to Phurwa’s wife, who said the injured man didn’t dare stay in his own house because he was afraid of the police coming to get him. June 3 was a black day in Dolpo’s history. It had never suffered such violence before, not even during the Maoist war. An eighty-three year old grandmother in a monastery told me, crying, that when she was young there was no rice to eat, but she never saw such cruelty.”

Cover photo: An inhabitant of Dho reads out the list of the villagers’ demands. Phurwa Gurung