Saraswoti Nepali, recipient of this year’s Darnal Award, in conversation with Gyanu Adhikari 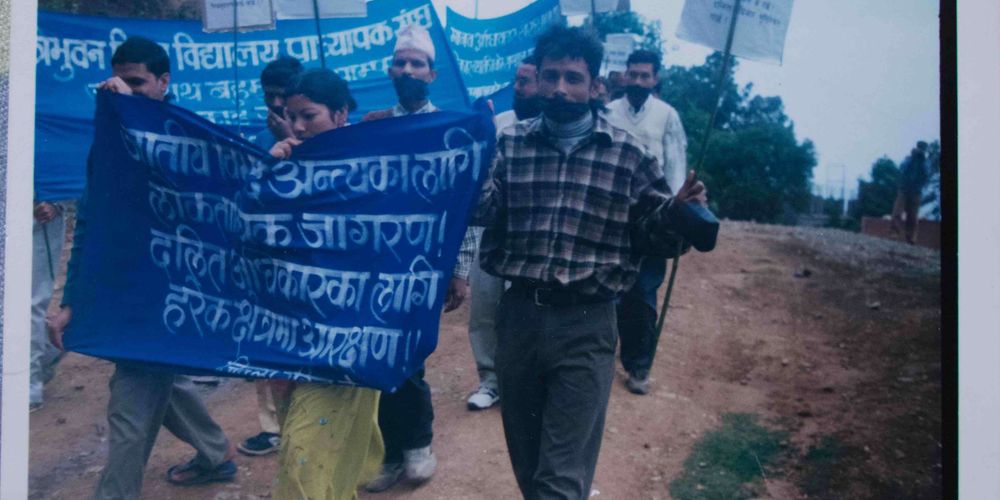 I had a general sense of the stories of discrimination and abuse that I was going to hear, but not of the harrowing details. I was there to hear the story of Saraswoti Nepali, a Dalit leader from Baitadi, in the far west, who had just won the Darnal award. She led me to her temporary lodging at the girls hostel owned by the Ministry of Land Management, Cooperatives and Poverty Alleviation. I sat on one of the two beds and fiddled with the camera and turned on the recorder.

“Tell me what you want to tell me,” I told her, “I’ve no questions left to ask. I only want to listen.”

As we sat on hostel beds behind the parliament building in Baneshwor, Saraswoti began narrating to me her stories about the burden of being a Dalit in today’s Nepal.

Three years ago, she was going home from Dhangadhi. It snowed and the bus she was on was stuck in Dehimandu bazaar. Darkness was falling but there was nowhere to go. To this day, they don’t let Dalits in their hotels.

“Where do we go? There was another, a non-Dalit woman with me. The bus driver said he had a hotel that was now shut down. The clothes there were chewed up by mice. We talked to one of the hotel owners for food. He said there was none. The woman I was with had noodles with her. I never eat noodles but ate some that night. We ate the noodles, chewed it with the snow. That was not the sad part. We went to our room. There were two beds, both without quilts. It was unbearably cold, and we lied down in separate beds. At midnight, the woman said to me, Saraswoti, it’s too cold, let’s sleep in a single bed, and use one of the mattress as a quilt. But the way she said it seemed like she’d rather die than sleep with a Dalit on the same bed.”

After that, mann maryo, the spirit died.

Saraswoti Nepali was born on August 24, 1981 in Dashrath Chand Municipality, youngest among six siblings. Her father died when she was six. She was the first in her family to go to school, made affordable because one of her brothers, who couldn’t afford school himself, was able to get a job at a military barrack. She has a mother in her ‘80s at home. She never married.

The inevitable disillusionment with education set in for Saraswoti after high school. She studied at Dashrath Chand primary school. All 90 students at the school were Dalits but none of the teachers were Dalits. It got worse in high school and college. Some of her classmates and teachers wouldn’t share a bench with her, others would make excuses to avoid eating with her.

“Mann maryo, the spirit died.” No more education for Saraswoti, she decided.

“Where does one turn to when the society turns on you? God?” I asked.

But the temples couldn’t revive her spirit.

“These temples where they pray were made by Dalits,” Saraswoti said, “but they don’t let us in.”

She fought against it. Just like the other Dalits. Just like those other Dalits before her. In 2000, the Dalits in Baitadi entered the Jagannath temple and got beaten up for it. They eventually forced their way in.

But the victory also brought pain, and a realization of how long and frustrating the fight had been. Those before her fought against it, and now she’s fighting against it. The generation after her will also have to fight it, instead of going to colleges and dream of being doctors and engineers.

What is this fight for anyway? She mused. To go inside a temple and light a lamp? To be able to buy a cup of tea in a hotel? To go anywhere, and not feel fear that someone might see me or beat me up? To be free?

“I lost my faith,” she said, “I’ve never been to a temple again and burned an incense there.” She hasn’t changed her religion like so many Dalits to join one where they aren’t discriminated against. She’s not a Christian. Or an atheist. The faith has just evaporated.

The Republican system came. Dalits are still beaten. What use is a Republic to a Dalit? There have been small improvements. They will serve her at hotels only because they know she’ll fight back. Still, when her mother goes they’ll make an excuse. The hotel will run out of tea. And the way they talk to you. The ones who used to say “Ta” now say “Timi.” But they tag you as Dalit everywhere. A Dalit parliamentarian is always introduced as a “Dalit parliamentarian,” but you won’t hear non-Dalit parliamentarian called a “Bahun parliamentarian.”

The stasis is there. Pani chaldaina. Water doesn’t work. The wells are separate. The taps are separate. The temples are separate. There is a famous temple called Jagannath. There’re two of them —one for Dalits, one for non-Dalits. Look at the government offices. None of the helpers and cooks are Dalits. They hire Dalits as sweepers but not as cooks. The water doesn’t work. Of course, a Dalit can’t be a boss. You need certificates of education for that. If you want to be the office helper, you’re an untouchable. They won’t drink water you bring. Pani Chaldaina.

The rare Dalit officer doesn’t have it easy either. Saraswoti recalled the time one had come to give training to women. In the evening, the women said, please find a Dalit’s house to spend the night. We can give you food, but we cannot enter the house. We have old men in the house so we can’t let you stay there.

Everyone knows this, even the local chief of police. I can’t say there’s no discrimination because there isn’t a single Dalit hotel, he told her, the discrimination is invisible.

No, not everyone. A journalist called Basudev Bhatta opened a hotel around 2000, and allowed the Dalits eat and sleep there. Soon enough, everyone stopped going to his hotel. He had to shut it down. These days, he’s got a new, fancy, hotel where the NGOs and INGOs stay to discuss Baitadi and quote statistics. About 22 percent of people in Baitadi are Dalits. There are two Dalit ward chairs, and zero out of ten municipalities are headed by Dalits. She ran in the last election herself on UML ticket, but lost to high caste politicians.

Her phone started to ring. Before we parted, I had a final question. So what’s the way out for Dalits?

Economic revolution is the future, Saraswoti said, we have the skills. We have the capacity to work. But we have to go till other’s field. The new constitution says it’ll make land available for Dalits for one time. Well, where is it?

These days everyone is talking about development, she continued. They say we shouldn’t talk about rights. Everyone is going crazy about building new roads. But drinking water is also development, especially since the drinking water taps don’t reach Dalit homes in the margins of villages, a distance apart from the rest. A lot of business is off limits. The Dalits can’t open hotels. If they could maybe the youth of my district would be here in Nepal, working, instead of working as laborers in India. 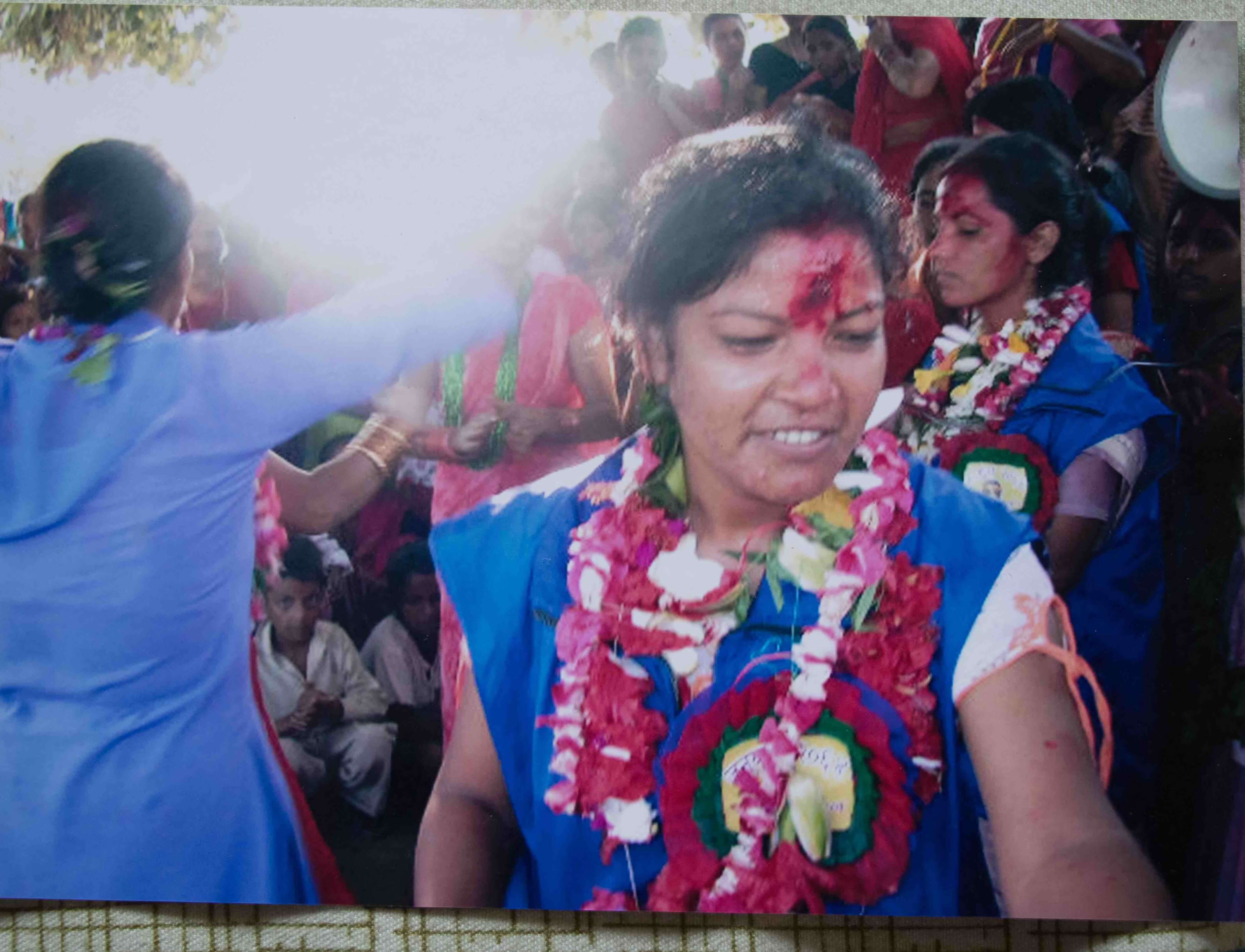 Saraswoti Nepali is back in Baitadi. Organizing women’s groups. Fighting, as she has since childhood, for equality. The only thing she’s been trained to do, after half a life of fighting against caste cruelty. She couldn’t be a government officer. She couldn’t be a professor. She couldn’t pursue all the things she wanted to . She is left with the one thing she knows. This activism. This fight that impoverished so many she knows, and robbed them of time.

Dalit women have to overcome many obstacles in order to lead. The story of Nanumaya Gandarva, an elected Dalit representative from Rambha Rural Municipality, Palpa.