In his two decades of work, Subha Ratna Bajracharya has chiseled many iconic structures, many of which can be found in temples and landmarks all across Nepal and around the globe. 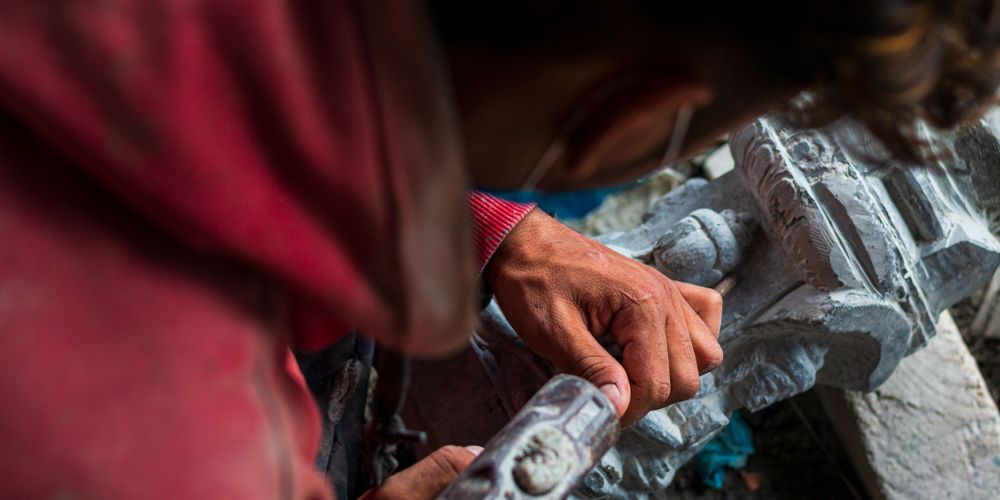 A worker at Bajracharya’s workshop carving the Pancha Buddha. (All Photos- Deewash Shrestha )

Inside his workshop in Balkumari, Lalitpur, Subha Ratna Bajracharya gently places a stone slab on the floor. The stone has the image of Bhimsen, the god of trade, embossed on one of its faces. Bajracharya lightly scrapes at the surface with a flat-tipped chisel to smoothen its face then switches to a pointy chisel and mallet to carve out its eyes.

As Michelangelo said, it's not up to the artisan to create a god out of a piece of stone, god is inside everything, it is just that artisans refine the bad part and present it to everyone,” the 37-year-old stone artisan says as he puts aside the slab.

Bajracharya is surrounded by monolithic structures and statues. The floor is covered in white dust and stone fragments. Neatly stacked on one side is a collection of his finished projects -- water spouts, chibas, and idols of deities.

In his two decades of work, Bajracharya has chiseled many iconic statues, many of which can be found in temples and landmarks all across Nepal and around the globe. “From making statues tiny enough to decorate aquariums to creating a six-feet-tall statue carved from a single boulder, my range of work has been vast,” said Bajracharya.

“One of my recent projects is a 108 cow head waterspouts paired with 108 unique stone idols of Lord Shiva that are being made for religious tourism in Lamjung district,” he said.

Bajracharya was also a part of the project on the emblematic miniature version of the Krishna Temple that is placed on the Thapathali bridge connecting Kathmandu with Lalitpur. His beautiful masonry is globally sought after, with projects being commissioned from Switzerland, Thailand, Bhutan, United States and many parts of the world, with demand remaining consistent even during the lockdown.

“People outside Nepal mainly come to know about my work through Google and the reviews old customers have left online for my work,” said Bajracharya, who is also building a sample stone chaitya to be placed in Lumbini International Airport.

And the pandemic has not hurt business as well, says Bajracharya. “Half my staff were afraid to work due to the pandemic, so they returned to their villages,” said Bajracharya. But his remaining staff of 10 masons and five trainees often find themselves working overtime to meet the high demand for stone handicrafts.

That’s because the job pays well. “A really skilled artist can earn upwards of eighty thousand rupees a month,” he said. Trainees can master the art of chiseling stone within a year.

The stone crafts themselves can fetch prices from Rs4,000 for a basic design to more than one lakh for the same piece embellished with fine details. The costs of handicrafts differ based on the quality of work and the time it takes to finish a piece.

“Stone handicraft is a lucrative field for people who are interested in art. Many of my students have also gone on to open their businesses,” Bajracharya said.

However, there’s one problem that’s been plaguing the sector: it is becoming increasingly difficult for them to procure raw materials, especially with the ban on mining in the Chure area.

“We of course understand that hollowing out our hills unsustainably is morally wrong,” said Bajracharya, acknowledging the dangers of Chure hill mining on Terai communities. "But stone artisans require only a single piece of rock, which they use for a prolonged period. If the government made provisions for masonry, it would help our sector a great deal.”

Owing to the scarcity of raw materials, Bajracharya often searches for rocks when he is out hiking or heads to his nearest junk dealers. “To excavate huge rocks I need government approval, but for smaller crafts, I bring to the workshop smaller rocks I find on my hikes and from lands my friends own,” he said. The statues he’s built for his own personal projects have also helped him win in competitions, such as the Nepal Academy of Fine Arts (NAFA) National Competition 2077 in the traditional category.

The rocks and stones needed for his work are dug out from hillslopes. Underground rocks are used for their brittle composition so that artists like Bajracharya can easily cut into it with a chisel. Rocks exposed to the sun for too long are too hard for masonry tools to be effective.

But some days, Bajracharya feels as though the charm of his work is fading. “I come from Vinchebahal tole, Lalitpur, where the whole community is involved in our ancestral heritage of stone handicrafts. There was a lot of motivation for stonemasons in the era of kings because they would be heavily rewarded for building beautiful structures around the city,” said Bajracharya.

Nyatapola, the five-storied temple of Bhaktapur, and the Eiffel Tower in Paris were built with similar incentives in the past. To this day, they are worldwide magnets of tourism, Bajracharya adds. However, there is little motivation for such endeavors in Nepal today.

“Nowadays, although statues of deities are still popular, people are more inclined towards buying stone handicrafts to decorate their homes and businesses,” said Bajracharya. “But to us, our art is deeply rooted in tradition. For us, stone carving is part of our heritage.”

A revival in vinyl

Wild Yak Records is attempting to bring the nostalgia and analog quality of vinyl to a new generation of music aficionados.

The second in the AxV exhibition series hosted by Kaalo 101

A history of magazines in Nepal

Ethics and engagement in community art

An ethics of mutual learning and openness has to develop around commission-based projects led by urban artists but oriented toward local rural communities.