A new book traces the history of Nepali tourism through encounters between Western travelers and Nepalis. 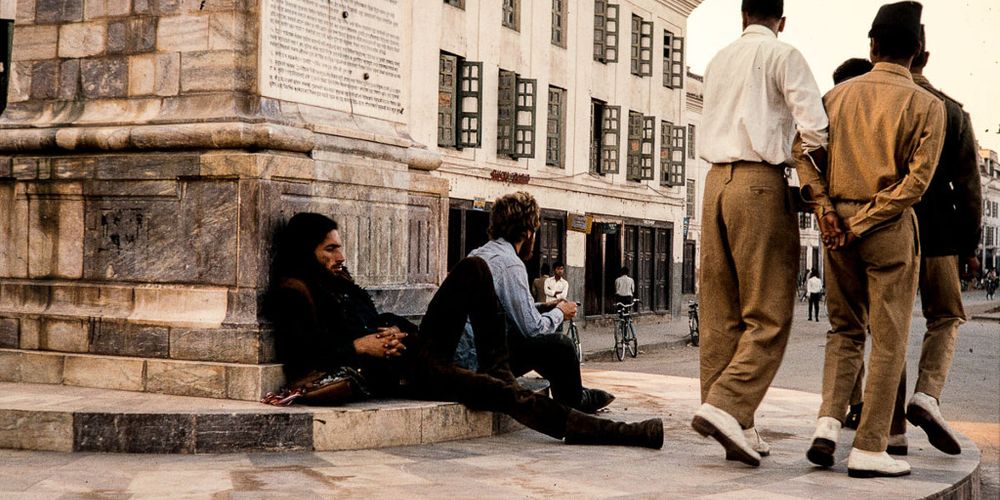 Far Out: Countercultural Seekers and the Tourist Encounter in Nepal is an ambitious attempt by anthropologist Mark Liechty to offer a detailed history of tourism in Nepal since its emergence in the 1950s. Liechty traces the remarkable transformations that have taken place in Nepali tourism since the Rana period. Western travelers, he argues, have understood Nepal in different ways over time: as a repository of late-colonial nostalgia, an oriental Shangri-la of “spiritual awakenings,” a hippie paradise, and an untainted land of “natural” beauty. Loosely chronological in structure, the book draws from sources as diverse as American popular magazines, academic works, interviews, Nepali literary works, and personal diaries from people's hippie days. Liechty’s emphasis throughout the book is on the “encounter” between the outsider and the insider. He is as interested in how Nepalis made sense of tourists as he is in how tourists made sense of Nepal.

Completely shut off from the Western world during the Rana regime,  Kathmandu had seen only about three hundred Westerners by 1951. Lietchy attributes this to the Rana attitude towards (white) foreigners, one “characterized by a peculiar mixture of sycophantic Anglophilia and intense xenophobia.” But despite its inaccessibility, the mountains of Nepal had already been projected with notions of a Himalayan utopia untouched by modernity, and when the floodgates were opened in 1951 with the fall of Rana regime, “the fantasies, projections and longings” that foreigners had were ready to be realized.

Still, the early days of tourism in Nepal was extremely limiting due to the complete absence of infrastructure, including hotels, transportation channels, as well as Nepali society’s unease with foreign bodies in their midst. In contrast to the stereotypical depiction of the Nepali hospitality, Liechty writes:

With the exception of the cosmopolitan elite, few Nepalis were initially comfortable with foreigners. Beyond the obvious language and cultural differences there were significant caste-related problems. Not only were Westerners non-Hindus and therefore untouchable, but their beef-eating ways made them almost literally repulsive.

In part due to concerns over ritual purity, even wealthy Nepalis were not quick to jump on tourism as a potential source of income. In fact, the first notable capitalization of the nascent tourism industry came from an eccentric Russian, Boris Lissanevitch, who was the figure behind Nepal’s first hotel, The Royal Hotel. Recounting an anecdote by a visitor from 1957, Liechty writes that tourists arriving in Kathmandu during this period wished to be photographed with three things: “ (1) Mt. Everest (which they were told was too far away to see), (2) the Abominable Snowman (which they were told was too shy), and (3) Boris, ‘the famous ballet dancer and night-club king who goes hunting with film stars and Maharajas.’”

Liechty is fascinated by the figure of Lissanevitch, known simply as “Boris,” who is sometimes referred to as the “father of Nepali tourism,” for putting Kathmandu on the map for the rich and famous Western elites. With the independence of India and the fall of colonial regimes everywhere, Boris took it upon himself to create a:

Raj-like, Oriental/colonial experience available to elderly postwar elites (especially Americans) who wanted to live some of the Kipling-esque fantasies that they had entertained since youth and could now finally (after 1955) pursue in the at-last-opened “Forbidden Land” of Nepal.

Like Boris, another foreigner who used colonial nostalgia to create a touristic experience for wealthy Westerners was the American John Coapman, founder and early manager of the Tiger Tops hunting lodge. As African countries as well as India were decolonized, it became more and more difficult to gain the experiences of “hunting machismo” in these places, and “Nepal, newly opened but still a more-or-less feudal state with a quasi colonial ethos, began attracting the attention of hunting elites in search for an authentic mystical experience.”

The industry took a very different turn in the 1970s, when the demographics of visitors shifted rapidly from the old, establishment types to rebellious, disillusioned, countercultural hippie youth, who were spending little money but a lot of time in the “magical east.” In what is perhaps analytically the sharpest section of the book, Liechty explains why so many young Westerners ended up in Nepal:

Across much of the world the 1960s was a decade marked by widespread anti authoritarian dissent that coalesced into various forms of countercultural expression, often associated with youth. As they approached adulthood, many in the post-war baby- boom generation seemed profoundly disillusioned with the promises and lived reality of modernity. Many rejected the crass materialism and moral vacuity they associated with their parents’ consumerist lifestyles… a visible and vocal minority of young people set out on quests to shake off their parents’ soul-crushing consumerism and their conformist religion.

Coming to Nepal was, for many, part of this quest. With cheap boarding, easy drugs, and free love readily available – and most locals happy to go about their business ignoring the strangers lingering on the streets – young Westerners found Kathmandu to be an ideal place for self-discovery. But more foreigners did not necessarily mean higher levels of cross-cultural engagement.“For many foreigners,” writes Liechty, “the Kathmandu scene was just a continuation of youth counterculture scenes around the world… often, the Kathmandu hippie scene treated Nepal as simply another stage for its own personal dramas.”

Even though many hippies in Kathmandu stayed in their isolated bubbles for the most part, the sheer number of these visitors meant Nepalis were forced to grapple with their presence. For older people in Kathmandu, hippies were comparable to Hindu renouncers, who were to be treated with ambivalence. For the young, hippies were enamoring harbingers of an aspirational culture. One Nepali artist who grew up seeing hippies recalls: “People like me, we looked at hippies and didn’t see dharma seekers. We didn’t see revolutionaries. We looked at them and saw Levis (jeans). We saw guitars. We saw records. And we wanted that stuff!” Hippies clearly played a significant role in how young Kathmandu residents understood modernity, and the impact this had on Nepalese youth culture for decades after the hippie-boom is arguably quite large.

Hippies defined Nepali tourism culture till the 1970s, but according to Liechty, a shift had taken place by the time King Birendra was in power in 1972. “From 1972 onward state officials targeted hippies, already an endangered species in the West, for expulsion even as it tried to lure more clean-cut, free-spending tourists to its newly packaged mountain adventure lands.” This led to a stringent policy of drug suppression, and a deliberate attempt by the Nepali state to brand the country as an eco-tourist destination with “trekking” as the focus. Till the 1970s, official policy towards tourism was one of “benign neglect.” But Birendra and his aides saw the immense money-making potential that global tourism held for Nepal. With help from bilateral and multilateral aid agencies, they began the process of constructing Nepal as a product for consumption. The “Nepali experience” was going to entail “walking in the mountains, watching cultural festivals in Kathmandu, tracking wild animals in the Terai, visiting monasteries, [and] white-water rafting,” things that are aggressively advertised and monetized to this day.

But the slow demise of a dominant hippie culture wasn’t just about official policy that criminalized drugs and sought to rebrand the country. Beginning in the 1970s, a shift in global youth culture  was beginning to make countercultural hippies a relic of the past. The hippie lifestyle involved a certain level of self-imposed poverty and comfort with doing nothing for months and even years. But as young adults’ priorities shifted with the onset of neoliberal economic and cultural transformations in the Western world, leading to young people getting serious about education, careers, and familial responsibility, “fewer and fewer people were interested in the journey – the Kerouac-inspired experience of life on the road. Rather than pursuing travel as an end in itself people were now focused on destinations.”

With Birendra’s “adventure tourism” policies in place, there was an exponential increase in the number of hotels, restaurants, travel agencies, and various amenities that would make travel to Nepal appealing for Western budget tourists.  The “Visit Nepal” campaign of 1998 was a natural outcome of decades of policy that sought to place tourism at the heart of national economic growth.

Although Liechty traces the trajectory of tourism in Nepal through an emphasis on change, something that remains constant in the various waves of touristic interest in Nepal is a fixation with “imbibing Eastern Wisdom.” Since the 1950s, Lietchty claims that Nepal has, for many visitors, held the promise of “experience, wisdom, and healing that they cannot find at home.”

Far Out ends in the 1980s, and readers might be disappointed to find no engagement with newer dimensions of tourism in Nepal, such as the much talked about emergent voluntourism industry. And although Liechty does briefly cover tourism around Nepal, the focus is overwhelmingly on Kathmandu; readers interested in a history of tourism in Nepal outside of the capital may want to look elsewhere as well. Nevertheless, Far Out is a gripping read for anyone interested in the evolution of the Nepali tourist industry and the cultural history of modern Kathmandu at large.

The First World War and its aftermath