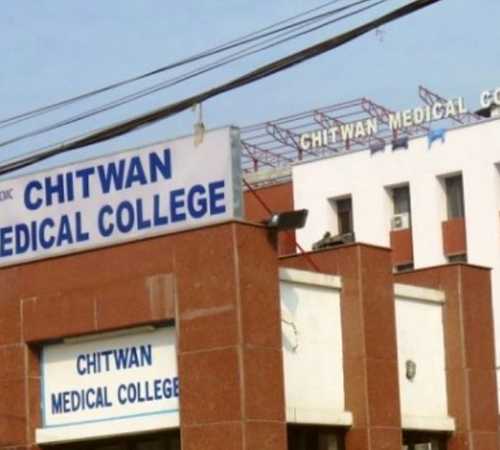 Chitwan Medical College (CMC) has become the first institution to start screening for Covid-19 infections through antigen tests by starting even before the government finalised the national antigen tests guidelines.

The college has already managed to conduct 500 tests in the past two days, owing largely to the fact that antigen tests deliver results within two hours, according to CMC representatives. In the past, CMC has conducted over 5,000 PCR tests as Bharatpur is one of the eight districts in Nepal with more than 500 active Covid-19 cases.

“Antigen tests have both merits and demerits: quick results are a merit, but it is also slightly less sensitive than PCR test. However, we are using the US Food and Drug Administration approved test kits,” said Dr Harish Chandra Neupane, managing director of CMC.

The government has not officially approved antigen tests yet as public health experts have pointed out the downsides of other similar testing mechanisms such as the rapid diagnostic tests (RDT). Antigen tests are known to be less sensitive than other diagnostic tests, and thus give false negatives, increasing the risk of the spread of the virus.

Nepal identified its first Covid-19 case in January. On Tuesday, the total number of Covid-19 cases reached 66,632, with 18,142 active cases, and the death toll reached 429. Following the RDT fiasco, and under immense public pressure, the government decided to extend PCR tests. However, the government never boosted daily PCR tests to make them truly effective in countering the virus. Average daily PCR tests still hover around 10,000 per day.

The government, meanwhile, has been complaining about its depleting resources for the treatment of Covid-19 patients. It started scaling down PCR tests and treatments for Covid patients. Currently, the government is refusing to conduct PCR tests on the diseased, asymptomatic patients, and even on frontline health workers, while agreeing to only cover the treatment costs of those it has ambiguously termed the ‘poor.’

But this decision has increased the risk of the virus’s spread. There are no exact figures to show how many people exposed to the virus have not shown symptoms. However, it is estimated that between 30-70 percent of cases are asymptomatic. By not testing asymptomatic cases, health workers, and the diseased, the government risks another surge in the number of new Covid cases in the days to come.

The Ministry for Health and Population (MoHP) argues that the reason for introducing antigen tests was to ensure mass surveillance as the number of Covid-19 cases continues to rise significantly. On September 10, MoHP spokesperson Dr Jageshwor Gautam informed that the ministry had approved antigen tests. He said that the antigen test guideline, prepared by the Health Research Council, would be endorsed with amendments.

Dr Samir Kumar Adhikari, joint spokesperson at the ministry, told The Record that the antigen test guidelines have not been finalised yet. “We are still discussing the areas and sectors in which it can be useful,” said Dr Adhikari. However, he was unaware that CMC had already begun the tests.

Antigen tests deliver results instantly and are more convenient to use, much like pregnancy tests. They are also cheaper than PCR tests. But at CMC, clients are being charged NRs 3,000 per test, NRs 1,000 more than the government’s rate for a PCR test.

“What is the point of introducing a less reliable rapid antigen test if it is more expensive than a PCR test?” said epidemiologist Dr Lhamo Sherpa.

Experts have been stressing on the need to ramp up PCR tests because of their reliability. PCR tests rely on a laboratory technique in determining infections by using a nose or throat swab. The results take time, often days, in Nepal as there are a limited number of labs. They also need trained technicians, which increases their overall cost. But PCR tests, and not antigen tests, are good at picking up low-level infections.

“It does not mean that antigen tests are useless. If we can't boost PCR tests, then we must go for antigen tests. It is useful for surveillance,” said Dr Sherpa.

Ideally, antigen tests are meant for mass tests at a low cost to assess the spread of the virus in a community. However, there is upto 20 percent margin of error. This means that if someone tests negative, it is advisable they retest themselves through PCR to confirm they aren’t infected.

“I want to make it clear that antigen tests are not a replacement for PCR tests. We have to make the best use of what we have got,” said Dr Adhikari.