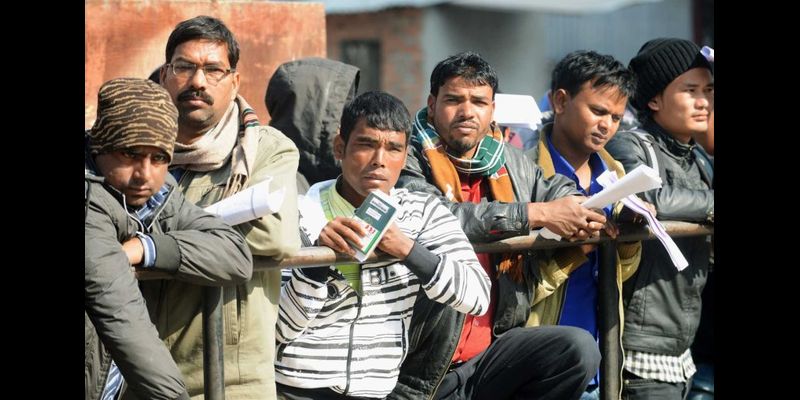 Between 2008/09 and 2018/19, the Department of Foreign Employment (DoFE) approved 4,099,939 migrant workers for foreign employment, which represents almost 14 percent of the current active voter population. Similarly, 28,716 new labour permits (excluding re-entry permits) were issued between February and March 2020. (These figures do not include undocumented migrants traveling via irregular channels and also do not account for those going to India). These numbers show that the migrant population constitutes a significant chunk of the voter population, big enough to swing elections. However, due to the lack of an option for mail-in voting, such a significant part of the electorate continues to remain disenfranchised.

It is undeniable that Nepal’s migrant workers are forced to migrate due to the lack of employment opportunities in their country of origin. And the denial and exclusion of their right to vote has brought them to the brink of complete political exclusion. Although Nepal has been sending migrant workers abroad and receives remittances legally, migrant workers are barred from taking part in the public affairs of the country. But despite remittances’ growing significance to Nepal’s economy, the exponential growth in foreign labour migration has not been matched by a governing framework to protect migrant workers’ human and labour rights, including access to justice. Additionally, the legislative process is completely inaccessible to migrant workers, essentially rendering them politically expendable.

The issues concerning the rights and plights of migrant workers or migration governance at large are also absent from the political manifesto of Nepal’s mainstream political parties. Therefore, even though remittances have made a significant contribution to Nepal's economy, the state continues to show an unwillingness to enfranchise Nepali citizens engaged in foreign employment. This is in direct violation of the universal principles of law that state that there should be no taxation without representation.

Since elections are the primary means by which people can participate in the policy-formation process, through their representatives, the right to vote is inextricably linked with the public’s freedoms of opinion as well as expression. Elections conducted without the participation of a large portion of the population constitute a violation of the rights of those constituents. The results of such elections give a false impression of the voice of the entire citizenry and cannot be considered inclusive. One could even argue that the erasure of the rights of Nepali migrant workers in policy frameworks, Nepal’s weak migration diplomacy, its ineffectual national governance, the lack of accountability for rights abusers, and stagnant political will are all byproducts of the lack of voting rights for migrant workers. The indifference shown by the government toward migrant workers amid the Covid-19 pandemic is another example of what the non-representation of migrant workers in the parliament and the government results in.

While there needs to be more discussion around the electoral process on ways to include migrant votes based on the constitutional provision for erecting constituencies, directly elected representation as well as proportionate representation ought to be allowed. Article 286(6) of the Constitution of Nepal 2072 mentions that when delimiting constituencies, attention shall be paid to the “population density” of the constituency. Some of Nepal’s biggest provinces  have the same population density as the Nepali population density in countries like Malaysia, Qatar, and those in the Gulf Cooperation Council. In this regard,  one could argue that the denial of migrant voting rights has sabotaged the democratic aspiration carried by the constitution itself.

To counter this political and governmental apathy, the Supreme Court of Nepal issued a judgement in September 2018 that directed the government to formulate an external voting mechanism. However, it has been two years since the judgement, and the government has still shown no progress in coming out with any such mechanism. Similarly, in Purnachandra Poudel v Election Commission (2011), the Supreme Court of Nepal highlighted the importance of a citizenship certificate as the only important criterion for being included as a voter. The government, however, continues to deprive these workers from voting in elections, ignoring the fact that they possess citizenship certificates, and thus going against the principle established by the court. Hence, to abide by the SC’s directives as well as the aspirations upheld by the Constitution of Nepal, it is imperative that the government come up with a proper and practical mechanism to ensure the voting options for migrant workers, without any further delay.

One of the main reasons the Nepal government and the Election Commission have not taken the initiative to enfranchise migrant voters has to do with the lack of political will among the mainstream political parties. The base of both the ruling and main opposition parties is considerably weak among Nepali citizens residing in labour-destination countries, compared to their support at home. As such, the parties have little political incentive to expand voting rights among the migrants. Also, it can be argued that owing to the parties’ close ties with manpower businesses that are complicit in the exploitation of migrant labourers, their incentives in many ways prevent them from defending the rights of migrant workers. From this vantage point, it seems the mainstream political parties are not only denying voting rights, they are also being complicit in the exploitation of migrant labour.

To make matters worse, even the Election Commission does not seem to be too keen on administering mail-in or other voting mechanisms for conducting polls for migrant workers. The commission has cited the huge financial costs as a constraint in administering the polls. However, this claim is irrelevant and unfounded. Countries with GDP per capita similar to Nepal’s, in terms of purchasing power parity—like Senegal—and even those with lower GDP per capita—like Mozambique—have guaranteed the mail-in voting option for their migrant workers, in recognition of their significant contribution to the national economy. Also, laughably the commission has even cited the supposed “incompetence” of migrant workers in using internet services as another hindrance in guaranteeing migrants their voting rights. Even if we assume that migrant workers are not competent in voting through the internet, which, with almost every migrant worker using smartphones, is probably not true, it is the responsibility of the Election Commission to ensure that citizens receive proper voter education. Additionally, the Nepal government has recently digitised the renewal process for labour permits, which makes the ability to use the internet almost a given for migrant workers. This decision in itself negates the very argument made by the Election Commission.

With mail-in voting in the US sparking abundant interest in Nepali citizens, perhaps it is time we direct our interest towards our own, much larger mail-in voting crisis. While we are astounded by how the destination countries treat Nepali citizens as if they were modern-day slaves, have we not done much worse by denying them their fundamental right to vote?

The lockdown, one year on

A year ago Nepal first went into lockdown to prevent the spread of Covid-19. A year later, new cases are rising once again.