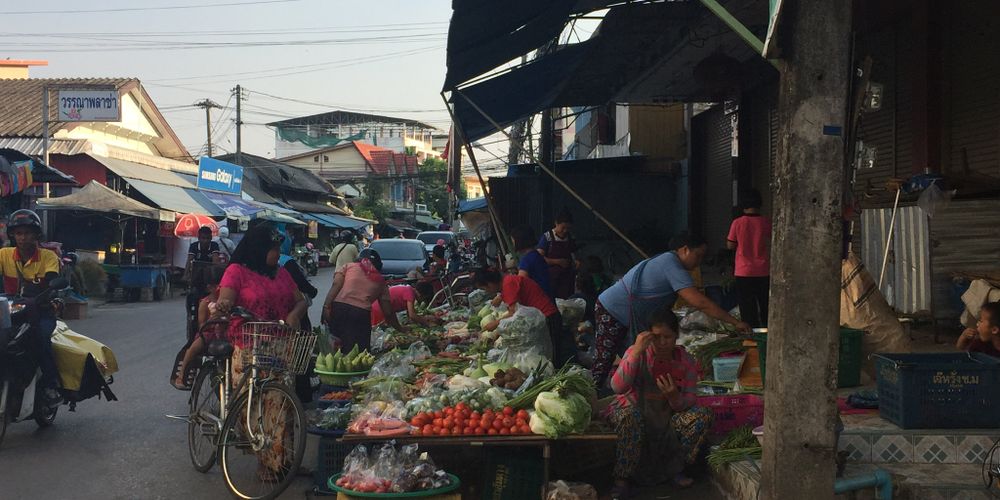 Most of the Nepalis in Thailand are recent arrivals, coming to work, to study or simply to visit the beach. Yet there are some who have much longer ties to the region. These people of Nepali origin migrated to Burma long ago, but were then pushed out of Burma and have landed in Thailand. The Thai-Nepali Association states there are 80,000 Thais of Nepali descent living in Thailand and some have claimed that over 90 per cent of all Nepalese living in Thailand are refugees from Burma. Today they are known as Burmese Gurkhas. However, many exist without citizenship in either  Burma or Thailand. Here several questions arise. How did they get to Burma? Why did they leave and how have they fared in Thailand?

The first large scale migration of Nepalis to Burma came alongside the British East India Company. Following the Sugauli treaty in 1816, the Gurkha Brigade of the East India Company was formed. This Brigade first entered Burma during the First and Second Anglo-Burmese Wars of 1824-6 to 1852-3, before again playing a role in the expulsion of King Thibaw from Mandalay, at the end of the third and final Anglo-Burmese war of 1886.

It was not just Gurkhas serving for the British East India Company, and later for British India who came, many civilians also came in search of work. According to Gurkha historian and researcher Tim Gurung, from 1824 onwards Nepali laborers were introduced to Burma by the East India Company to work at the Heindar mine in Tennarserim, in south east Burma, and then later fanned out across the country. Farmers followed, moving to Kachin and Chin States in search of good agricultural land. They came according to Tim as “Burma offered more hope for them.” This migration would continue for decades.

In Burma there is a list of 135 official Burmese ethnic groups, only those on this list are considered Burmese citizens. The Burmese Gurkhas are not on this list, making their route to citizenship incredibly difficult.

Many  settled permanently in Burma. This wasn’t that difficult of a decision. With Burma until 1937 being a  part of the Bengal Presidency which then bordered Nepal, travel to Burma was relatively easy and documentation not a problem. At the time with trade, business and resource extraction booming, and military service in Gurkha regiments, money was far easier made in British India than in Nepal. Gurkha settlements swiftly sprung up across the country.

As of 1942, there were reportedly 200,000 Gurkhas residing across Burma. The final migration came in World War 2. During the war many Gurkhas entered Burma, alongside other British forces during World War 2 to end the Japanese occupation of Burma. The campaign for the Burma Road was fiercely fought, with the 4th Gurkha Rifles Battalion playing a vital role. Yet as the war finished, while many returned to Nepal, just like before, others stayed on.

Thus today, the Nepali diaspora, or people of Nepali origin in Burma and Thailand, are overwhelmingly decedents of those original Nepalis who came to Burma either as Gurkhas or laborers when Burma was a British colony. Yet life in post-independence Burma would not prove to be easy.

Initially, as per the 1947 Constitution the Gurkhas were granted full rights as citizens of Burma. After 1948, many Gurkhas stayed in the Burmese army as part of the newly formed No. 4 Burma Regiment, which saw fierce fighting against the Kuomintang (KMT) and in other ethnic areas. Unfortunately things would change dramatically just a few years later.

Following the 1962 Military Coup by General Ne Win and amidst Burmanization and nationalism during the rest of the decade, avenues for citizenship started to be closed off. This caused problems for those Nepali communities who had yet to formally apply for their citizenship. In Burma there is a list of 135 official Burmese ethnic groups, only those on this list are considered Burmese citizens. The Burmese Gurkhas are not on this list, making their route to citizenship incredibly difficult.

Unable to get citizenship, or receive the benefits of the state which they were born in, many Burmese Gurkhas had a difficult decision to make. Stay as second class citizens in their country of birth, where they were educated and spoke the language, or move elsewhere.  Many stayed and large Gurkha communities still remain in towns of Pyin Oo Lwin, Myitkyina, Taunggyi and Kalaw.

While many choose to stay, many decided to leave. During this period many of Burma’s Indian population also left Burma for the same reasons and for becoming persecuted by a growing nationalist movement.

When they decided to leave, a significant number went back to Nepal or stayed in the north-eastern regions of India, while many tried their luck in Thailand, crossing without proper documentation over the large and porous border. The biggest challenge they would then face was getting the correct documentation in order to live and work in Thailand.

A Burmese Gurkha and migrant activist, living on the Thai Myanmar border, speaking on condition of anonymity told me, “There a lot of difficulties for Gurkhas in Thailand. As we are not part of the 135 Burmese ethnicities, we cannot make any travel documents or work permit in Thailand. Lots of people we work with haven’t got any documentation at all, so it's getting very difficult for them to work. If they get caught by police they get into trouble."

Since crossing the border, some Nepalis have been successful in their search for citizenship and recognition, in 1985, during a visit to Thailand by King Birendra some Burmese Gurkhas, living near the Burma border in Kanchanaburi, “took advantage of King Birendra's visit to take up the matter with Thailand’s revered late King Bhumibol. The king helped, and the Nepalis got their legal papers.” However cases like these are rare.

Khagendra Dhakal, former head of the Non Resident Nepali (NRN) Thailand confirmed this view, “Maybe 5%-10% of Nepalese in Thailand with citizenship received it after the Nepali king requested King Bhumibol to grant them Thai citizenship.” He told me that such requests had ceased to work. “There was a certain time when the Thai government considered and granted such requests, but that time is over.”  The other 90% have allegedly obtained citizenship through dubious, or illegal means.

Yet even more have no citizenship or legal documentation for Thailand at all, making life much harder. They are forced to live with the constant threat of arrest, deportation and with severely curtailed mobility.

Not falling in the 135 ethnic groups and barred from citizenship back in Burma, yet struggling in Thailand, these Burmese Gurkhas face an uncertain future.

A Burma Human Rights Network report titled Existence Denied, found that in Thailand,  Burmese Gurkhas reported suffering discrimination by the Thai authorities. The report interviewed a Burmese Gurkha living in Thailand who complained about unfair treatment and the issues and struggles of life without Burmese citizenship. “The immigration authorities speak rudely to us—they make people scared of dealing with them. They shout at us like animals.” There is a real lack of options for Burmese Gurkhas in Thailand. Not falling in the 135 ethnic groups and barred from citizenship back in Burma, yet struggling in Thailand, these Burmese Gurkhas face an uncertain future. Without proper documentation or citizenship from Burma, getting visas or residency in Thailand is almost impossible. “The only option is for people to use a broker, and pay more to get the documentation they need. It feels like we are caught in a net and can’t go anywhere. People who don’t have money—they give up. People who don’t have ID—they give up. People can go home and live like slaves, or they can stay in Thailand and become stateless.”

So while what are their options? A return to Nepal is unlikely. With many not speaking Nepali and having grown up in Burma, a return to Nepal is not an attractive option, and Nepal is not always willing to greet returnees of Nepali descent with open arms, as was shown in the case with the Lhotsampa refugees from Bhutan. Making things worse, analysis or creation of alternative solutions is compounded by a paucity of accurate and reliable data.

Even if they could return to Nepal, would they want to? Khagendra doesn’t think so, “they don’t want Nepali citizenship, they just want a NRN card that allows them to visit Nepal, not full citizenship.” This is because Nepalis cannot hold dual citizenship. “They say they don’t want citizenship of Nepal because that will cause them trouble in Thailand with what documentation they do have. They want to be connected to the land of their ancestors, but they know the social status in Thailand is much better so they want to stay there.” Most, he says, just want to live and work safely in Thailand, with the potential to occasionally visit family back in Nepal.

Yet even the chances of getting the NRN card appears slim. Without ancestral documents from grandparents proving they have links to Nepal, such as documentation regarding parents or property in Nepal, they will not qualify for NRN status. Khagendra estimates less than 1% qualify to get NRN status.

The majority of the Burmese Gurkhas came to work in Burma but due to political turmoil in Burma, they continued their journey to Thailand. Many are unwilling to leave as Thailand offers a higher socioeconomic standard of living, even with the precarious nature of their existence. Far more importantly, for many 2nd or 3rd generation Nepalese, life in Thailand or Burma is all they have known.

Many of the Burmese Gurkhas may be document-less but they are far from helpless, as the activist tells me, “We are collecting information for those people without ID or documentation and requesting the Burmese government to give them documentation to allow them to get the paperwork to live in Thailand.” What’s more, with the results of the recent Thai elections soon to be announced, some Burmese Gurkhas are hopeful that a new government will bring around an easier life, “If there is a new government they can help, but right now we are unsure, we will have to see.” In the meantime, they remain a long way from Nepal, without the paperwork to come home, and without the paperwork to safely stay.

About the author: Max is a journalist formerly based in Kathmandu and a human rights officer at Assistance Association of Political Prisoners Burma.