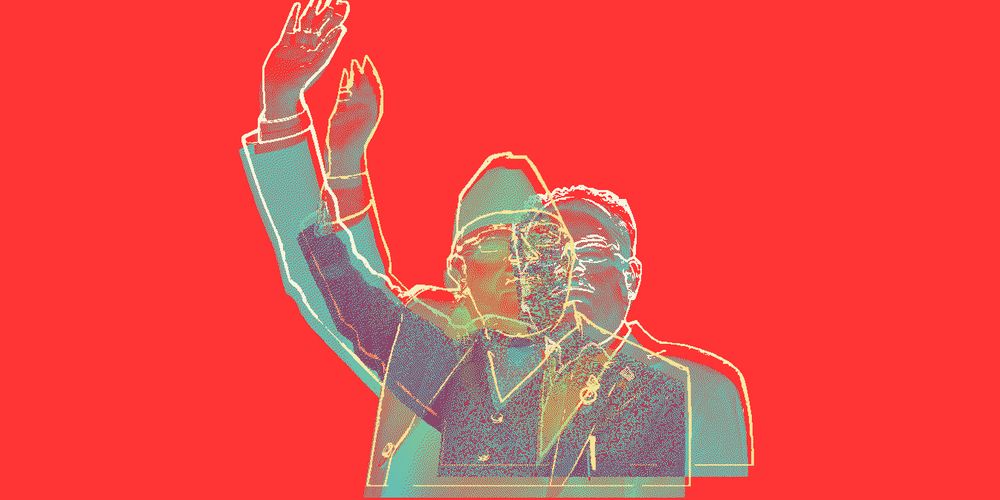 Similar to 2008 and 2013, the 2017 election results have been surprising. The alliance of left parties—communist in names but capitalist in practice—have captured two thirds of the directly contested seats, leaving the Nepali Congress, which has been in the government most of the years since 1990, trailing in third place.

The magnitude of their win mirrors the surprise elicited by the formation of the alliance itself. When CPN-UML Chairman KP Sharma Oli and CPN (Maoist Center) Chairman Pushpa Kamal Dahal shared the stage on October 3, two months before the election to announce the electoral alliance, everyone was taken aback. The Maoists had fought the local elections together with Nepali Congress, and everyone, including Nepali Congress PM Deuba, expected the alliance to continue onto the national and provincial elections.

Even as the Maoists ran the government with their coalition partner Congress, behind the scenes, Narayan Kaji Shrestha from the Maoist side and Bamdev Gautam from the UML (ironically, both would go on to lose the elections despite the red tide) worked hard to form an alliance with a promise to merge after the election. Their argument was simple: the balance of power in Nepal had shifted to the left with the mainstreaming of CPN (Maoist Center), but disunity among leftist parties had weakened their performance in the elections. The talks were going nowhere. The Maoists went into the local elections by partnering with the NC in more than 60 local units, including Bharatpur Metropolitan City, while alliance with UML was largely confined to ward level.

The results of the local polls gave the upper hand to those in both parties who wanted left unity. UML’s opposition to identity-based federalism and to India’s involvement in Nepal’s affairs, both populist stances, helped it win the most seats in the local election. But the party’s votes were not enough to secure a majority in the national parliament and provincial assembly elections. The UML and Maoist Center won 37 percent and 18 percent of the total votes cast in the local elections while NC won 34 percent of total votes.

UML leaders saw two major benefits in forming the left alliance: consolidating the left votes put the party in a comfortable position to form a government both at the center and the provinces for the next five years, and alliance with the Maoists fractured the NC’s rival alliance. The latter was important, because with the support of Maoist and the regional Madhes-based parties, NC was poised to lead the next government.

The Maoists were desperate. The party had been hoping that the acquisition of ten Maoist offshoots including one led by Ram Bahadur Thapa would bolster its poll performance in the local elections. That did not happen. The Maoists’ dwindling popularity in eastern and western hills and terai plains ahead of two key polls was a major concern for the former rebel party. Moreover, UML's proposal to give around 40 percent stake in seat-sharing gave the Maoists a chance to be near-equal partners in the new coalition. Despite reservations from the pro-identity politicians in the Maoist party, the alliance was announced.

The mood is duly jubilant for the left, but the results are not surprising. Taken together, the communist parties’ votes were enough to win comfortable majorities in all elections since the Maoists joined mainstream politics. In fact, had UML and Maoist Center collaborated in the second constituent assembly election in 2013, they would have clinched 83 percent of the seats under the first past the post category.

Asides from the consolidation of votes, other factors that helped the alliance included a meticulous poll campaign and well designed messaging. Right from the beginning, the left alliance was able to project itself as the answer to political stability needed for development. It was also able to portray itself as a coalition that could stand up to India. In fact, it is anyone’s guess who is disliked more in New Delhi: Prachanda or Oli. This helped the alliance hold sway on Pahade communities ever more skeptical of India since the 2015 blockade. Added to this was the goodwill of old voters long enjoyed by the UML, thanks to a welfare scheme for the elderly enacted by late Manmohan Adhikari’s government.

The Nepali Congress was poor at messaging. There was no organized response to the left’s propaganda, and few voters bought NC’s claim that the left’s victory would bring dictatorship—the most common refrain in Deuba’s speeches. In fact, Congress leader Gagan Thapa believes that it may actually have helped the left by giving the impression that their victory was imminent. Further, NC's attempt to appease Madhesi constituencies through constitution amendment proved insufficient, and may have lost it votes in the hills. The promise was not exactly sincere. Madhesi constituencies have remained resentful of the way anti-constitution protests were suppressed in 2015 by the Congress-led government and its successor government led by Oli.

No government since 1990 has lasted more than three years, so the left alliance’s victory could mean a stable government that serves its full term. That would be unprecedented. By now, both the UML and Maoists have shed their communist skin and are entrenched in crony capitalism. The real challenge for the civil society would be to goad the alliance to take steps to address the perennial political problems generated by caste, gender, and ethnicity-based inequalities. If the new government decides to ignore or use force to suppress these issues, the promised stability will turn into oppression. It remains to be seen how liberal the alliance will be in tackling these issues by amending the constitution, particularly since the man most likely to lead the new government, Oli, has in the past been condescending to the minorities’ agenda.

The result, the optimists say, may also compel the Congress to retire old patriarchs and inject vitality into the party. It needs to reform. Within the party, the Congress is yet to reach the level of democratization achieved by the communist parties. It’s typical response to the country’s most pressing problems have been to delay. For example, it didn’t even propose a plan for federal Nepal in the four years of the first Constituent Assembly, and rejected the model offered by both the Assembly and the State Restructuring Commission. Although it is being saved by proportional representation, the party originally stood against it. It is as steeped in patriarchy as UML and the Maoists, the parties complicit in unequal status for women in the constitution. Despite benefitting from Madhesi (and other minorities) votes for decades, the Congress-led government chose to deal with their protests with bullets. It’ll have to win their trust back by pushing for amendments to the constitution. That, and a greater eagerness to expand our civil liberties, will open the doors to reclaiming its lost status.