Bacteria and the Bagmati

Bacteria and the Bagmati 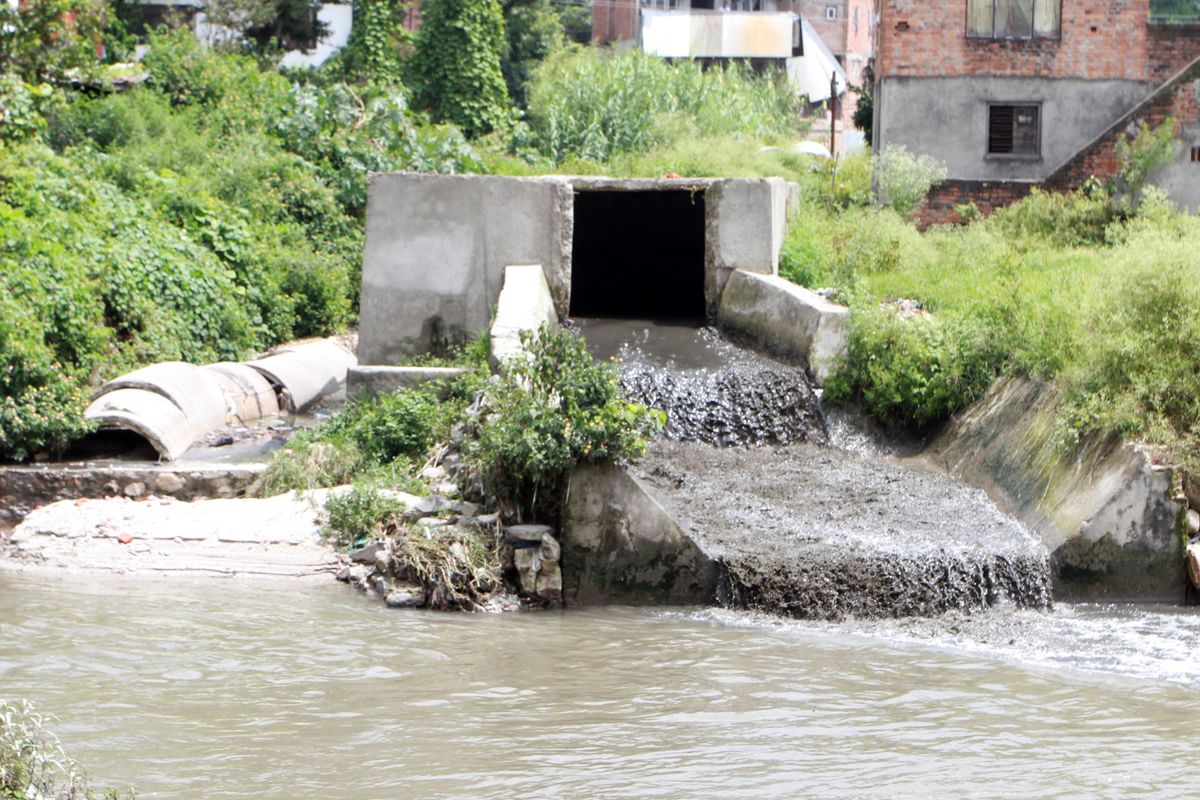 For decades, the Bagmati river has been plagued by sewer waste, industrial effluent, and community-level solid waste. (RSS)

A grave concern is rising among the scientific community worldwide. Its origin is biological; it circulates and regenerates in the environment and grows in amplified strength due to unregulated human behavior. The Covid-19 pandemic will pale in comparison if we do not act to curb this looming threat on time. This rising threat is Antimicrobial Resistance and the motherload of its threat is deposited in our rivers. For Kathmandu, the biggest source is the Bagmati river.

Antimicrobial Resistance is a phenomenon where bacteria, viruses, fungi, or parasites (microbes, in general) develop resistance against antimicrobial agents. Antimicrobial Resistance (AMR) occurs when bacteria, viruses, fungi, and parasites change over time and no longer respond to medicines, making infections harder to treat and increasing the risk of disease spread, severe illness, and death. These may be antivirals, antifungals, antibiotics, or antiparasitic agents. These drugs then interact with bacteria in the water, which can evolve resistance within these environments, which in turn can transfer to human-associated bacteria, meaning that antibiotics are less likely to work.

As research scientists who have studied infectious diseases, wildlife, and the environment in a single paradigm, there is not a single element of surprise over how Covid-19 has come about. Yet, here we are again, reminding people of a larger threat that looms on the horizon, which has the possibility to change global economies and bring our existential momentum to a standstill, resulting in an unprecedented loss of animal and human life.

In October 2020, the World Health Organization declared AMR as one of the top 10 global public health threats facing humanity. And rightly so. The cost of AMR to the economy is significant. A larger spectrum of multidrug resistance in patients leads to more expensive medication, longer hospitalization, and a series of other financial and health burdens. The greater long-term risk developed by AMR can have grave secondary and tertiary impacts on treating common infections that come from surgery and cancer chemotherapy, with the potential to seriously affect the future of safe medicine practices. Our misuse of antibiotics has already built and will build resistance to a level irreversible if unchecked, resulting in dire consequences with the most nominal bacterial infections.

So where does the Bagmati fit into this?

For decades, the Bagmati river has been plagued by sewer waste, industrial effluent, and community-level solid waste. The motherload of all antibiotic use in the form of fecal and sewer waste ultimately lands up in the rivers with large consortium studies (led by the University of York in 72 rivers worldwide) showing increased AMR loads in rivers, particularly in Bangladesh, Pakistan, Kenya, and Ghana. The Mekong (in China), Seine (in France), and Chao Praya (in Thailand) all show large antibiotic loads.

Here in Nepal, the Bagmati is also replete with antibiotic loads brought about by overconsumption of antimicrobials by both humans and livestock, antibiotics in particular. This waste, which is dumped in the river, undergoes little to no wastewater treatment. According to a report by the Asian Development Bank, of the five projected WasteWater Treatment Plants (WWTPs) supposed to be functional in Kathmandu, only the Guheshwori WWTP is currently functioning. The plant handles the waste load of more than four million people daily, which means the waste of the rest of the 10 million people who live in Kathmandu is dumped untreated into the river.

Our off-the-shelf self-medicating practices for human health and the unregulated use of medication in livestock and agriculture burdens the Bagmati to a level where genetic-level conjugations result in larger antibiotic resistance that would or should not have otherwise developed.

Anyone who understands AMR knows all too well its threat in a clinical setting. Every day, the scale is tipping incrementally towards resistance and lowered susceptibility. In the pharmaceutical world, investment in antibiotic research and discovery since the mid-1990s has paled in comparison to the earlier half of the century owing to lower market returns for drug discovery. AMR is predicted to become the leading cause of mortalities worldwide by 2050, with multidrug resistance already causing over 700,000 deaths globally.

WHO duly states, "The main drivers of antimicrobial resistance include the misuse and overuse of antimicrobials; lack of access to clean water, sanitation and hygiene (WASH) for both humans and animals; poor infection and disease prevention and control in health-care facilities and farms; poor access to quality, affordable medicines, vaccines and diagnostics; lack of awareness and knowledge; and lack of enforcement of legislation." Such a predicament is the exact one the Nepali people find themselves regarding the Bagmati.

What can we do?

As far as Bagmati cleanups are concerned, they are all too often limited to campaigning with banners and posters below the Thapathali bridge with feel-good social media tags and pats on the back. Solid waste management is a grave issue in its own right but AMR derived from wastewater, sourced primarily from sewer waste, will become Kathmandu's largest health threat by 2050. Research and decisions surrounding effective wastewater treatment for both biological and chemical effluents to ensure safe animal and human health are urgently necessary.

Pilot studies around understanding the antibiotic load on our rivers, accompanied by environmental metrics such as chemical offload, Biological Oxygen Demand (BOD), and Dissolved Oxygen, will be significant while moving forward. As a response to tackling Covid-19, a number of molecular research units have been built around the country. This is the right time to use them through a multidisciplinary scientific approach in order to understand the true load of unprocessed wastewater. These studies can then inform the best decisional strategies for Antibiotic-Resistant Gene (ARG) reduction, which is the true culprit behind AMR.

The private sector also needs to step in and help fund research, as wastewater remediation is a great opportunity for economic welfare in the form of compost and/or localized bio-energy resources. But more so, because the Bagmati is the artery of our collective health in the valley. The failure to secure public health, as Covid-19 has shown, affects all businesses in one form or the other. Bagmati cleanups can no longer be just about picking up trash for a day; cleanups should be complemented by research, for which the medical, environmental, and general community at large must be ready to pitch in.

AMR is not going to explode overnight, but it will gradually and incrementally increase in impact. For now, it is a sleeping tiger but it will soon awaken to fury.