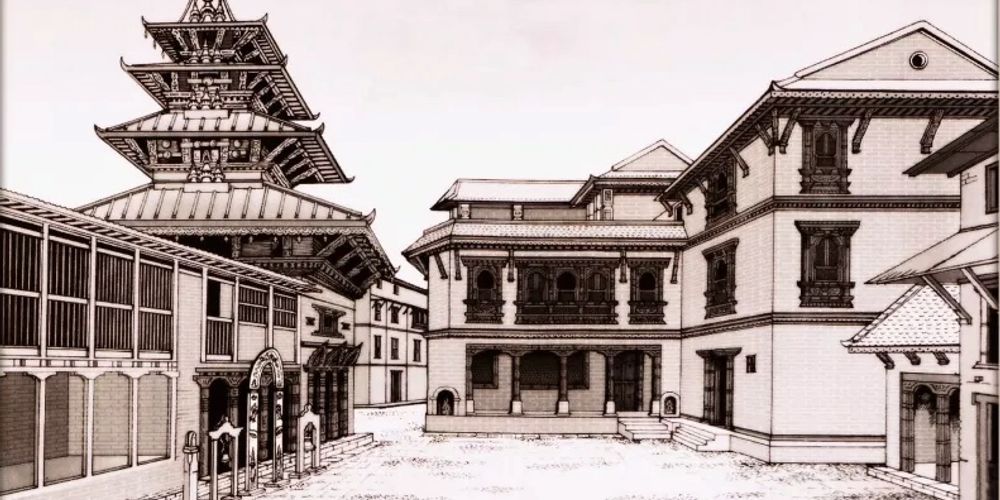 Early Tuesday morning of 10 July 2018 was a special occasion for the residents of Harisiddhi. It marked the reconstruction of Samal Paati, a traditional gathering space and rest house that follows an ongoing reconstruction of another paati, Satah Fala. These are two of the many historic monuments that the 2015 earthquakes severely destroyed in Harisiddhi, including 550 houses.

Residents started with uprooting a solar lamppost that had encroached on Samal Paati’s territory. With the lamppost dislodged, the stage was set for a pooja to formally inaugurate the reinvigorated resolve to rehabilitate the heritage in Harisiddhi — an effort led by the community members, and under the radar of the Metropolitan City Office, the Department of Archeology, and the National Reconstruction Authority. These three government bodies are in some way or the other involved in the reconstruction of heritage structures in other Newari settlements in the Kathmandu Valley, but not here in Harisiddhi.

A Long Road to Recovery

Harisiddhi shares traits that are similar to Thecho and Bungamati, two other Newari settlements that have now become Kathmandu’s periphery. Located a mile south of the city of Patan, en route to Godavari, Harisiddhi, or ‘Jala’, whose origin, some claim, dates as far back as 426 BCE, was once a cultural center of historical significance, as evidenced through oral histories and manifest in local inscriptions and architecture.

But the three places have different stories to tell in the post-earthquake time. Bungmati has become UN-Habitat’s flagship heritage project. Reconstruction is nearly complete of Ta Falcha, a paati, and Dey Pukhu, a pond that serves as a public space. The reconstruction of Machhindrabahal, a historic temple central to Bungamati’s identity, has been funded by and carried out under the technical guidance of the Embassy of Sri Lanka and the Department of Archeology.

Likewise, in Thecho, Lumanti, a national NGO that works in the areas of urban poverty and shelter, is currently supporting the reconstruction of about 150 houses. The Department of Archeology is overseeing the construction of one of its historic monuments, Bal Kumari Mandir.

Harisiddhi’s case is different. Following the earthquake, a Harisiddhi Reconstruction and Rehabilitation Committee (HRRC), a community-led reconstruction committee, was formed, which put together an elaborate master plan budgeted at nearly 4 billion Nepali Rupees to rebuild Harisiddhi. The 2016 master plan was an aspirational and ambitious document, inspired by similar initiatives taking place in Bungamati and Pilachhen, Patan. The plan included reconstruction of temples, paati, ponds, courtyards as well as the 550 houses that the earthquake had destroyed to be rebuilt according to the Newari vernacular. However, without any internal funding mechanism and a lack of the kind of external interest that Thecho and Bungamati have been able to garner, the ambitious plan died a quiet death. Harisiddhi residents hardly talk about the HRRC or its master plan now. When they do come up, a passing reference is made with a hint of fatalism. This reveals that master plans that are not grounded in the practicalities of finding resources to execute the plan, often end up being dangerous. In that, the untimely death of the plan sows the seeds of further despair within the community already capitulating to the disaster and its hopeless aftermath.

An eroding sense of place

Quite a few families continue to live in temporary shelters made out of corrugated tin sheets. Snakes choose the monsoon season to spread around. A primary concern for many now is to stop them from entering the shelter. They want to sleep soundly with the knowledge that a snake is not coiled next to the cushion on the floor. For them, rebuilding is a distant worry. The majority of households who have rebuilt or are rebuilding have been able to do so only after selling a plot of land, a family inheritance, “the ancestors’ gift”. Long-term recovery, to some, would mean being able to reclaim that gift, to restore historical continuities at the level of family and community, which may never happen. Instead, many dread that should another earthquake strike, forcing similar carnage like 2015 upon the place, there is no “ancestors’ gift” left to lean on.

The 2015 earthquakes forced changes not just to the built environment. On average, a house inhabited by a joint family of two to four families occupies an aana of land, which is around 340 square feet. This is a minimal area. As such, the structure has to go vertical, three to five floors. A floor, with a staircase in it, can fit no more than a room.

When the houses fell apart, they exposed the complicated and complex nature of home and landownership passed down informally through generations. Joint families have disbanded and converted into nuclear families. Many have decided to move away from the core areas towards the farmlands where it is more open. In these open lands, each floor would accommodate more than one room, so structures do not have to be built as tall. Moving away from the core area also provides an escape from the entanglements of landownership, its division, and the messy family affairs that are rooted in such entanglements. To those who have stayed, out of choice or lack thereof, Harisiddhi is no longer the vibrant place that it used to be. It is quieter now.

In the old Newari towns such as Harisiddhi and Bungamati, streets and alleyways meander their ways around open courtyards, paati, ponds and water spouts, wrapping them with social meanings and emotional orientation. The organization of space and structures were designed to mediate the everyday to infuse the mundaneness with moments of laughter and play, even if the everyday repeated itself with ritualistic regularity punctuated, of course, with boredom from time to time. There were more 'eyes on the street' to instil the place with a familiar sense of security; no surveillance cameras needed. It is in and around these tangible structures of heritage that the intangible practices necessary for preservation of the continuities of cultural and social life are constantly reproduced, memories are rekindled, and associations reestablished. They happen through the rituals of festivals, such as the ‘mask dance’, performed in these spaces, as well as the ordinary rhythms of everyday life, like relaxation, and through the artisan skills that are applied, and passed on to the next generation, when maintaining and renovating these spaces. Now these structures of heritage stand dead and decrepit. If not resuscitated in time, they will eventually disappear. For the social to survive, space matters.

The pooja at Samal Paati promises to arrest the eroding sense of place and community, and begin the incremental process towards rebuilding Harisiddhi and reclaiming its heritage. With it, the community has restored some semblance of energy and activity back into Harisiddhi. Men gather from time to time to discuss the design, construction, and cost, while women and kids huddle around as curious bystanders – all seemingly oblivious to the gendered nature of the collective performance. An architect from Bungamati has helped with the design, free of cost. The local brick kiln has donated 2,000 bricks for construction. A benevolent outsider has deposited the first truckload of sand in the construction site.

Through such initiatives, the community hopes to gradually cultivate wider interest and inspiration to rebuild Harisiddhi, which may eventually bring their entire master plan back from the dead. The global Newari diaspora may be summoned to raise the necessary reconstruction funds. Some say the local ward may have a small pool of funds that could potentially be allocated towards the Samal Paati. But it is all hearsay for now.

The paati once used to be a play-space for the kids. Some would climb on the beams and savour the feeling of invincibility that comes from being on top of a 10 feet tall structure, while others would crawl into a little room underneath the floor space to play with the puppies just born to a neighborhood dog; where priests and performers sang ‘bhajan’ deep into the night; and where elderly men indulged in endless games of cards while women cobbled together hay to make shoes. Together, these myriad activities imbued the place with a sense of community.

Amidst the ruins and the debris that still need clearing, children continue to convert the courtyard into a playground. People still gather from time to time to sit on the mattress under the stars at night to celebrative festivities over samai-baji and aila. Space is boundless as is time, filled with sociality, conviviality and an extroverted sense of community. Where else are these features available in this city in which every little inch of open space is appropriated by ‘party palace’ and ‘futsal’, in which the fundamental concepts of playing and partying are as commoditized as they are commercialized, in which life itself has become a muse beholden to the ruse called capitalism.

Resuscitating ‘heritage’ is crucial to evicting oneself from the ennui of introverted modern life, and reclaiming the social that is gradually disappearing from the Newari everyday life in particular and the urban life in general.

Days and nights in Nepalgunj

Life, politics, and identity in an underappreciated border city

Intoxication, Music, Revelations: A conversation with Rabi Thapa on Thamel

Pedaling as an act of rebellion

After years of bicycle commuting, I have realized something important: cycling challenges injustice on the road. Riding a bicycle in Kathmandu is confronting power and privilege.